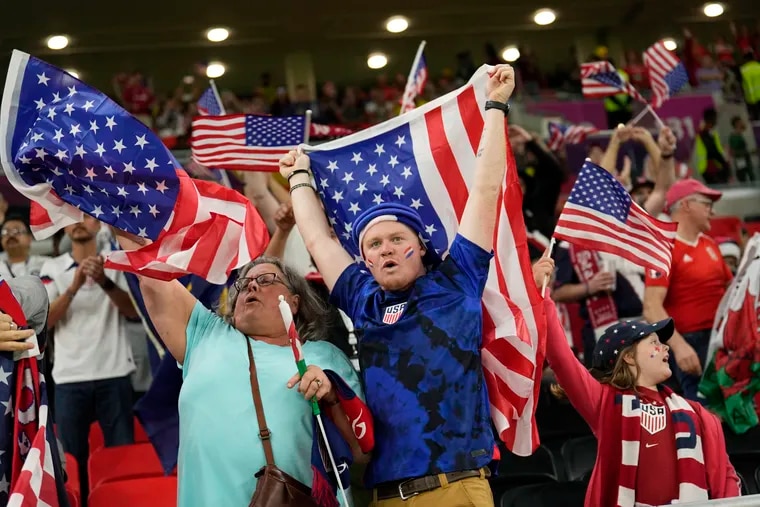 The game that so many fans have waited for is finally here: U.S.-England on Black Friday at the World Cup. But it’s not the only big game Friday. Wales-Iran has major implications for the U.S.’ group, while Group A’s two winners so far meet in Netherlands-Ecuador.

Here’s how to watch all the action.

» READ MORE: The TV, radio and live streaming schedule for every game of the World Cup

Group B: Wales vs. Iran

FoxSports.com and TelemundoDeportes.com require authentication through participating pay-TV providers. Peacock is NBC and Telemundo’s subscription streaming service. The first 12 games of the World Cup will be available on Peacock’s free tier, then the rest will be behind the subscription paywall.

Fox also has replays of every game for free on its streaming platform Tubi.

Wales: Kieffer Moore. The 6-foot-5 striker changed the game against the U.S. when he entered at halftime. Will he make an impact from the start this time?

Iran: Hossein Hosseini. Team Melli’s backup goalkeeper had to come off the bench in the 20th minute against England after starter Alireza Beiranvand suffered a nasty head injury (and was left in the game for far too long afterward). Hosseini gave up all six goals Iran conceded.

Group A: Qatar vs. Senegal

Qatar: Hasan Al-Haydos. There’s no doubt the host nation wilted in the spotlight on opening night. The question now is was it nerves, or was the talent gulf really that big? The team’s results in recent years allow for the possibility it was the former. Let’s see if this game brings the proof for Qatar’s captain.

Senegal: Boulaye Dia. Senegal out-shot the Netherlands 15-10 in their opener, but didn’t score. It’s up to the Lions of Teranga’s No. 9 to make sure that doesn’t happen again.

» READ MORE: Putting soccer on the map: How communities around Philly are celebrating the World Cup

Group A: Netherlands vs. Ecuador

Netherlands: Cody Gakpo. His incisive run and sharp header to break open a scoreless tie against Senegal late in the closing minutes showed why big English teams want him.

Ecuador: Enner Valencia. The 33-year-old striker showed he’s still got it by scoring both of La Tri’s goals against Qatar.

» READ MORE: How much do you know about the World Cup and its history? Take our quiz.

Group B: England vs. United States

England: Harry Kane. There was concern that England’s captain suffered an ankle injury in the opening rout of Iran, but he passed all his medical tests. If he’s at his best, it will be another headache for a U.S. defense that already has to contend with a fleet of English stars.

United States: Gio Reyna. There’s nothing new about athletes saying they’re totally healthy when coaches and doctors don’t. If U.S. manager Gregg Berhalter was worried about Reyna’s oft-injured hamstrings after the 20-year-old had some tightness in a scrimmage last Thursday, there was good reason. But the word now is Reyna is ready to go, so it’s time to see him. He can help in this particular matchup, too, with possession and defensive hustle on top of attacking skill.

» READ MORE: USMNT-England prediction: A 72-year unbeaten streak is on the line

China announces rollback of strict anti-COVID-19 measuresBEIJING (AP) — In a sharp reversal, China has announced a series of measures rolling back some of its most draconian anti-COVID-19 restrictions. It also limited the scale of lockdown to individual apartment floors and buildings, rather than entire districts and neighborhoods. Ukraine leader defiant as drone strikes hit Russia againKYIV, Ukraine (AP) — Drones struck inside Russia’s border with Ukraine on Tuesday in the second day of attacks exposing the vulnerability of some of Moscow’s most important military sites, experts said. Ukrainian officials did not formally confirm carrying out drone strikes inside Russia, and they have maintained ambiguity over previous high-profile attacks. The program allows drugs to launch in the U.S. based on promising early results, before they are proven to benefit patients.

1 day ago The Philadelphia Inquirer

I watched the highlights: Brown pointed at two Steelers defensive backs who failed to stop him from scoring in the end zone. Somehow, despite the direst prognoses at each stage of treatment — chemo, surgery, monoclonal antibodies, an experimental targeted treatment — Susanna was with us for another seven and a half years. When Audrey died in September, she was rightly remembered for her role in the founding of Ronald McDonald Houses. Michael Driscoll, City Council member, 6th District, PhiladelphiaJoin the conversation: Send letters to [email protected] Letters run in The Inquirer six days a week on the editorial pages and online.

1 day ago The Philadelphia Inquirer

Howie Kendrick loves the Trea Turner signing: ‘He brings every tool to the table’

Who will be president of the Diliman republic?

Read moreGeorgia, Michigan, TCU and Ohio State were chosen Sunday to play in the College Football Playoff, giving the Big Ten multiple teams in the four-team field for the first time. Corrigan also said the committee did not make any special effort to avoid having a rematch of Ohio State and Michigan in a semifinal. Ohio State (11-1) was given a second life in the playoff race when Southern California lost the Pac-12 championship game Friday night. The only time Georgia and Ohio State have played was in the 1992 Citrus Bowl, a Buckeyes’ victory. Ohio State is making its fifth playoff appearance.

Dems and GOP unite to sell out the American worker. Maybe we need a Labor Party

Indeed, 42 of the 48 GOP senators present voted to block the worker sick days (joined by Democratic traitor Joe Manchin of West Virginia). So rail executives — who’ve spent much of that windfall on dividends or stock buybacks — can’t spare a dime for sick days. Wrote New York magazine’s Eric Levitz in an excellent analysis: “That strategy is predicated on treating rail workers as if they were nearly indistinguishable from the railcars they drive. The plight of the rail worker epitomizes the broader workforce issues facing America coming out of the pandemic. To say that America lacks a true labor party is the political understatement of the millennium.

Anwar Gill of La Salle shoots a three-pointer against Temple during the first half at the Palestra. La Salle used an 11-2 run over the final four minutes of the half to take a 29-21 lead into the break. La Salle never cut the deficit closer than nine again. Temple, after a poor shooting effort in the first half, was 6-for-11 from beyond the arc in the second half. La Salle is back at the Palestra on Saturday for a game vs. Penn (2 p.m., ESPN+).

7 days ago The Philadelphia Inquirer

World Cup TV and streaming schedule on Fox and Telemundo for

READ MORE: The TV, radio and live streaming schedule for every game of the to reach the knockout stages for the first time since 2006.

Here's everything you need to know about TV and online streaming coverage for all 64 World Cup games in Qatar.

Fox and Telemundo Are Ready for Their World Cup Closeup

World Cup 2022 Channel Info: The 2022 World Cup will air on FOX, FOX Sports (FS1), and Telemundo. You can also stream every World Cup match on

2022 World Cup Schedule - dates and times in USA and Canada

World Cup 2022 schedule: TV and streaming in English and Spanish

All games will also be streaming on the Fox Sports App in English as well as Poland, 11 a.m. ET on FOX, Telemundo Belgium vs.

World Cup schedule on Fox and Telemundo TV and streaming for

Olivier Mbaizo's Cameroon faces a must-win against Brazil, while Luis Suárez's Uruguay is on the ropes against Ghana.

The complete TV and streaming schedule for November 4, 2022, with a list Gomez: My Mind & Me (Apple TV+, Original Documentary Premiere)