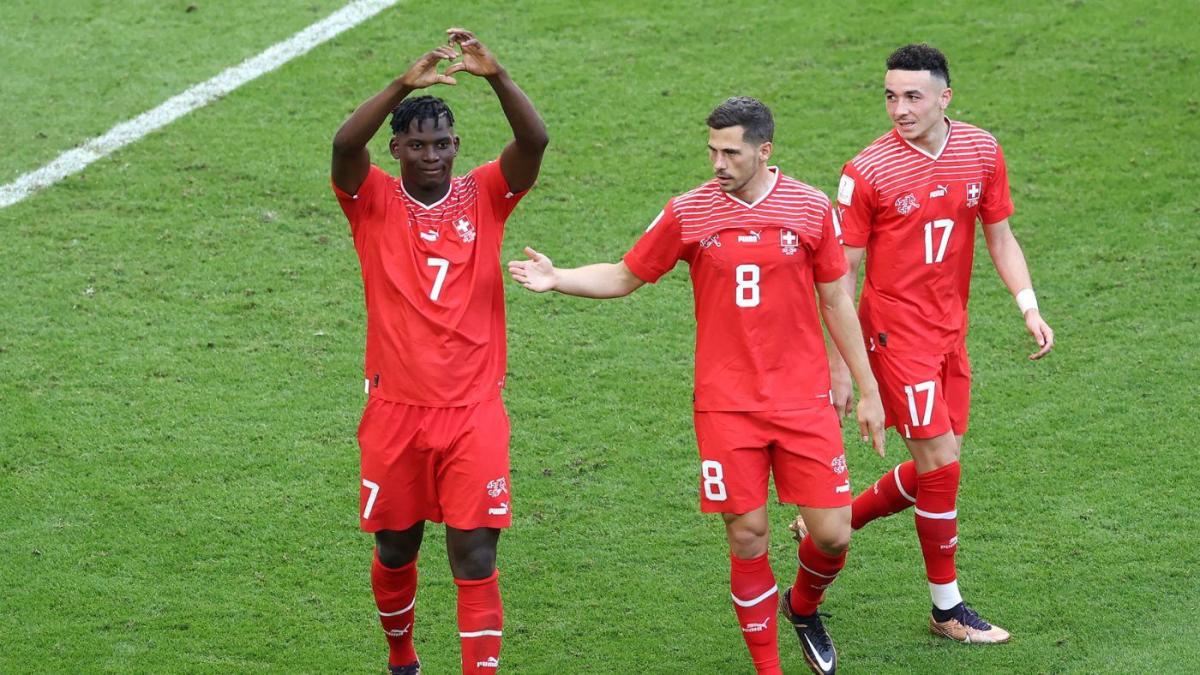 Switzerland made an efficient start to their FIFA World Cup campaign with a 1-0 win over Cameroon in Al Wakrah. Yaounde-born Breel Embolo made history early in the second half by becoming the first player in tournament history to score a goal for their adopted country against their nation of birth.

It was frustration for the Indomitable Lions, though, who were the better side in the first half and missed some good chances to take the lead at Al Janoub Stadium. Eric Maxim Choupo-Moting, Bryan Mbeumo, and Karl Toko Ekambi all looked dangerous at times, but the Swiss have established themselves as a tough nation to face at international level and asserted their dominance in the second 45.

It could have been worse for Rigobert Song's men had Andre Onana not been so sharp between the sticks to keep the Swiss at bay. However, the Nati ultimately remained tight at the back and saw it out for the win which launches their hopes of another deep run after conquering France at Euro 2020.

As for Cameroon, a tough group just got tougher with Serbia and Brazil to come in arguably tougher matches than this one. Can they fight back to make good on their hopes to reach the knockout phase for the first time since 1990, or has the damage already been done?

All eyes in this group will now be on Brazil who face Serbia in Lusail later on Thursday -- and while you're at it, sign up for our new newsletter covering the beautiful game in all its glory, including daily updates about the World Cup, here.

Some takeaways from Al Janoub Stadium.

The only goal of the game came early in the second half when Shaqiri teed up Embolo to score against his country of birth. Hailing from Yaounde, like absent international teammate Yvon Mvogo, the Swiss-raised striker was muted in celebration out of respect for his homeland. This is the first time it has happened in a World Cup, although Poland-born Lukas Podolski did so for Germany at Euro 2008 when they beat the Polish side. With quite a few players now representing their adopted nations rather than their birth nations, this could be an increasing trend from this point onwards.

At half time, the Africans looked the most likely to win it with Eric Maxim Choupo-Moting, Bryan Mbeumo, and Karl Toko Ekambi all giving Switzerland issues at the back. Ultimately, Yann Sommer, Manuel Akanji, and the Nati back line held firm and kept Cameroon at bay, but it was a lesson in efficiency for the Indomitable Lions. Rigobert Song's men cannot be so wasteful against Serbia if they want to still have anything to play for against Brazil.

Although his club career has followed an odd trajectory, the 31-year-old has been a consistent performer for his country over the years and that is reflected in his incredible 50% involvement rate based on Switzerland's goals over their past four international tournaments. Now with Chicago Fire in Major League Soccer, Shaqiri provided the only goal for the game for Embolo and continues to demonstrate how indispensable he is to Murat Yakin's men.

Much of Cameroon's approach was based around the Bayern Munich man's recent uptick in form despite a number of quality players across the pitch. Choupo-Moting is in superb form at present, but cannot be expected to singlehandedly carry the Indomitable Lions to the knockout phase. If Song's men are to advance, which admittedly looks less likely after this result, then they will have to be more clinical and perhaps bring more players into the mix by going less direct against Serbia's collective technique.

Switzerland 1-0 Cameroon: Breel Embolo refuses to celebrate as Swiss start World Cup 2022 with a win B. reel Embolo's goal early in the second

Switzerland made an efficient start to their FIFA World Cup campaign with a 1-0 win over Cameroon in Al Wakrah. Yaounde-born Breel Embolo

Breel Embolo scored the only goal of the game to give Switzerland a 1-0 win in their Group G opener against Cameroon at the 2022 World Cup.

FT: Switzerland 1-0 Cameroon. It is all over in Al Wakrah! Breel Embolo's historic goal gives the Swiss a narrow victory over the Indomitable

Breel Embolo scores the only goal as Switzerland beat Cameroon

Breel Embolo scored the only goal as Switzerland's World Cup campaign got off to a winning start in Group G after defeating Cameroon 1-0.

Switzerland's Breel Embolo scored the only goal against Cameroon - the country of his birth - in a hard-fought World Cup Group G opener.

Switzerland's Breel Embolo scored the only goal against Cameroon - the country of his birth - in a hard-fought World Cup Group G opener.