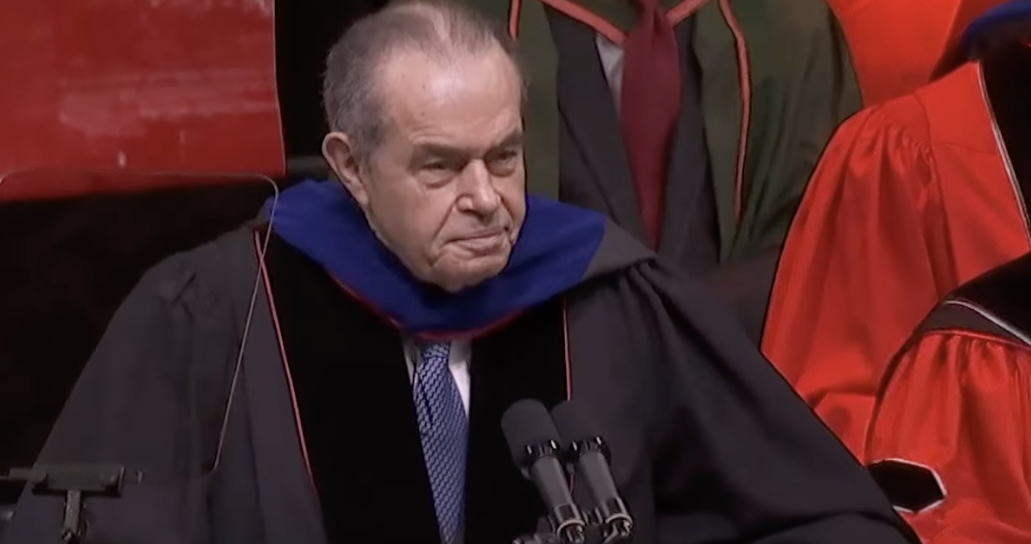 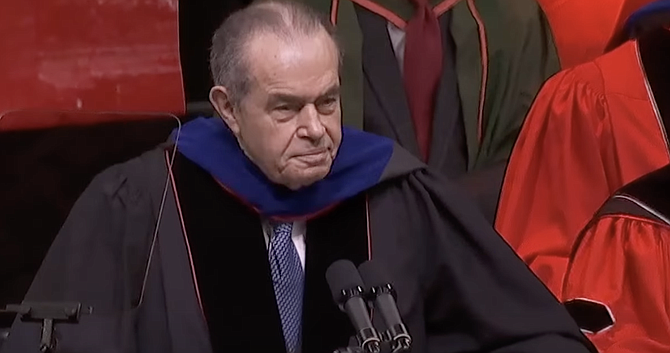 Mohamed Mansour at North Carolina State: “Football is in our blood."

News that East County's Sycuan gambling tribe and an Egyptian billionaire are on the verge of bankrolling a major league soccer team in San Diego has set off a big round of huzzahs on the Union-Tribune's October 28 front page.

But as usual, many questions about timing and potential costs to taxpayers lurk behind the announcement.

“An MLS franchise anchored in San Diego would be a win-win for the entire San Diego region,” the paper quoted a statement by Sycuan chief administrative officer Adam Day.

As a trustee of the California State University system, Day may face questions of conflict of interest regarding his role in the construction and operation of San Diego State University's Snapdragon Stadium, the likely venue of the future team.

"The London-based Mansour Group is headed by Mohamed Mansour, an Egyptian with degrees from North Carolina State University and Auburn University who ranks among the wealthiest people in Africa," according to the U-T.

“'Football is in our blood,' Mohamed Mansour, whose uncle was a goalkeeper on Egypt’s 1934 World Cup team, told Forbes last year," the U-T went on to report. "'We as a family believe that sports help nurture people.'”

Foreign investors, per the story, "have targeted Danish clubs for a panoply of reasons: good entry prices, low player wages, established youth development, and a liberal mainstream culture. But at what point does foreign investment become a threat to a thriving domestic soccer culture?"

"If it is just to have a toy to play with - something for very rich and wealthy owners - just to do something quick or give excitement in their daily life, it is a problem - or if they feed into a structure where they own more clubs, and they can just put players around in this system," Kasper Hjulmand, head coach of Denmark men’s national football team, told Forbes.

Mansour owns the Danish team through the Right To Dream Group, a soccer conglomerate in which Mansour Group purchased a majority interest for $120 million in January 2021.

Many questions about Mansour's involvement with Sycuan and the putative San Diego soccer venture revolve around potential future costs to the public for so-called stadium enhancements needed to house soccer at the SDSU facility, built for college football.

"SDSU Athletic Director John David Wicker has said he would offer flexible financial terms, either as a traditional rental arrangement or an equity partnership where the MLS club would invest in the stadium and have access to more revenue streams from concessions, parking, advertising and ancillary events," says the U-T's story on the prospective deal.

Earlier this year, Right to Dream lobbied the Maryland Stadium Authority to study building a new soccer stadium and a related soccer academy complex in South Baltimore, per published reports.

A post on the Maryland Stadium Authority's website says the study, including “a market and economic analysis," is ongoing .

"The primary tenants will be Right to Dream and would include both men’s and women’s professional teams, as part of an academy-based initiative. The study should also examine stadium ownership, funding, and operating recommendations, including a draft non-binding Letter of Intent with Right to Dream."

"The cost of the study is $62,000 and will be funded equally between Right to Dream, Port Covington, and MSA, with each paying one-third."

Why not them? Toreros march to first Elite Eight, sweeping Kentucky

Third-ranked USD swept 15th-ranked Kentucky 3-0 to advance to the Elite Eight, where it will face No. Thursday night was the first time the Toreros moved on to the Elite Eight. “That was just exceptional volleyball,” Petrie said in the postmatch press conference. And on the defensive side, USD held Kentucky to a .127 hitting percentage, .168 below its season average. In the second set, USD led 21-19 but pulled away by winning the final four points.

9 hours ago The San Diego Union-Tribune

Nicolas Batum scored 16 points and center Ivica Zubac had 16 points and 13 rebounds before fouling out in overtime. Bol Bol and Mo Wagner each scored 20 points for the Magic, who trailed by 18 points in the first quarter. Cole Anthony's 3-pointer started a 12-2 run late in the first half to get the Magic within three points. Seth Curry added 20 points on 8-for-11 shooting to help the Nets win for the fifth time in six games. Pelicans 104, Pistons 98: Zion Williamson scored 29 points with 10 rebounds as host New Orleans beat Detroit for its fifth straight victory.

Ralph Lawler, who introduced just as many hoops catchphrases as Scully did for baseball, and Hearn for basketball. Make that everyone he met, with two glaring exceptions: former Clippers star Blake Griffin and former Clippers owner Donald Sterling. He was polite, engaged and genuinely down to earth,” Lawler writes. “Ballmer went to shake Blake’s hand, but the player blew him off,” Lawler writes. While the audience for this book is limited to sports fans, it certainly is not limited to just Clippers fans or even to just basketball fans.

A group is accusing Ticket Masters of fans of the famous singer Taylor swift as they are unable to buy tickets for Taylor Swift’s Eras Tour. He pointed out that if the Ticketmaster company charges higher prices, they must specify the amount. It is said that ticket masters have intentionally and purposely misled the Taylor Swift tickets by providing codes to nearly 1.4 billion verified fans. At the same time, The New York Times has found antitrust over the Liv Nations Inc.Want To Know How Taylor Swift Reacted? >Related: Ticketmaster Site Crashes During Taylor Swift Presale!!!

San Jose Barracuda defenseman Artemi Kniazev left Saturday’s game and did not return after getting boarded by Tucson Roadrunners’ forward Bokondji Imama. However, the San Jose Sharks prospect gave the crowd the universal “I’m alright” hand gesture as he skated off the ice with the Cuda training staff. AT SAN JOSE HOCKEY NOW…The San Jose Sharks ended their eastern swing with a 6-3 loss to the Buffalo Sabres. Thomas Bordeleau has started to heat up for the Barracuda, along with other San Jose Sharks top prospects. Wishing a very happy birthday to @lukekunin9 🥳🎉 pic.twitter.com/3jiaOKllpI — San Jose Sharks (@SanJoseSharks) December 4, 2022AROUND THE NHL…Kris Letang is already back on the ice after suffering a stroke.

“I feel like I’m in a really good space, just for me,” Green said. “I’m going to keep taking them when it’s there.”Following a 119-111 win over Chicago, the Warriors are now 119-24 all-time when Green makes at least two 3-pointers. He’s shooting 60.5% from the field, which would handily ranks as the most efficient scoring season of his career. “It’s great to see Draymond making some 3s, but I just like the way he’s playing in general,” head coach Steve Kerr said. Wiseman impresses: James Wiseman finished with 24 points on 11-of-13 shooting in his sixth game with Santa Cruz in the G League.

How did Cal men’s basketball become one of nation’s worst programs?

Then it just took a different direction.”From 1993 to 2016, Cal men’s basketball reached 13 NCAA Tournaments, including two Sweet 16s. The big question now is how much worse things will become before Cal makes a decision about Fox’s future. I can assure you that nobody is more frustrated than Coach Fox and myself. Cal ranks in the 300s among D-I teams in points per game, assists per game, field-goal percentage, 3-point percentage and turnovers per game. Almost every Cal basketball alum who spoke for this story said he wanted to hear more from the current staff.

No. 2 Texas holds off No. 7 Creighton to stay perfect on the season

2 Texas in ways it hadn’t been pushed during its perfect start to the season. Hat’s off to Texas.”For the first time this season, Texas had to sweat it out. The towering Bluejay rolled for 20 points on 9-of-10 shooting and 13 rebounds in 34 minutes, putting a strain on Texas’ interior defense. Carr led Texas with 19 points on 7-of-20 shooting. We know we got eyes looking at us.”And on Thursday during another rollicking night at the Moody Center, Texas passed the eye test.

Women's soccer is at its brightest here in San Diego. The region's local team, San Diego Wave FC, is set to shatter a record this weekend at

SAN DIEGO (KGTV) — Stars, stripes, and soccer will be the subject Saturday for several San Diego establishments as Team USA fans file in,

San Francisco vs. San Diego: Which is the better getaway?

City of San Diego Hourly Minimum Wage Will Increase to $16.30

San Diego will finish January with 0.16 inches of rain, making it the driest January since 2014, when San Diego International Airport

San Diego will finish January with 0.16 inches of rain, making it the driest January since 2014, when San Diego International Airport