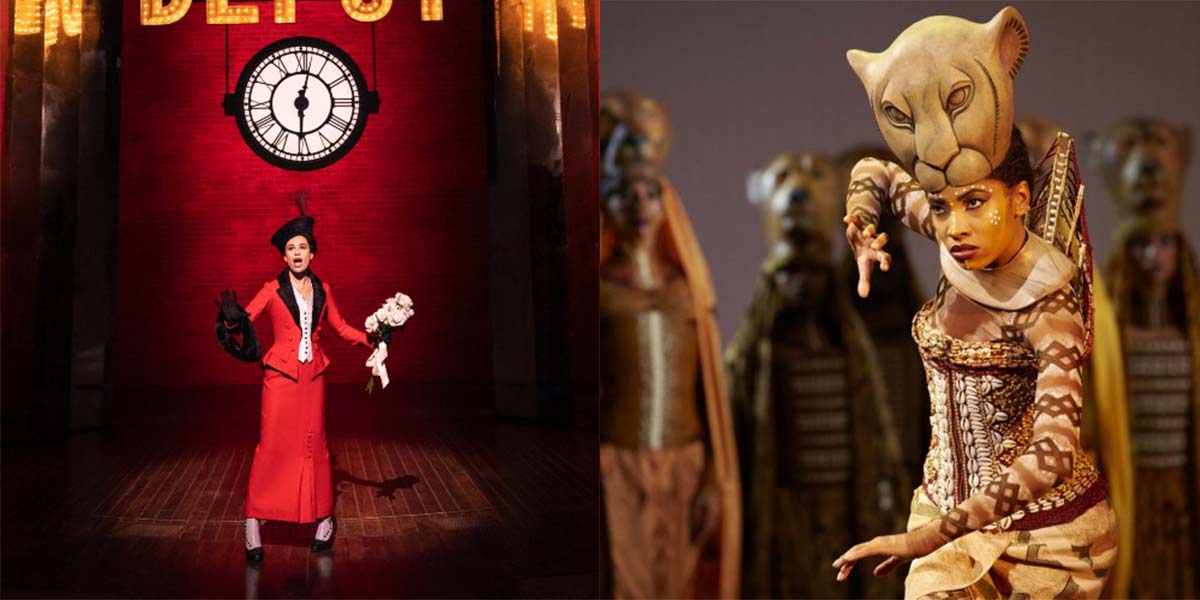 There are two broadcasts, each available to view on cable and to stream. Five performances will be on NBC and Peacock, whose broadcast of the parade airs from 9 a.m. to noon in all time zones. Another two will be on CBS/Paramount+, whose broadcast begins at 9 a.m. ET and 1 p.m. PT.

Below, learn about all the Macy's Parade Broadway and theatre performances to look forward to this year, with information about which channel each is available on.

No one's raining on Funny Girl's parade! The cast of this Broadway revival, led by Glee star Lea Michele as Fanny Brice, will kick off the NBC parade broadcast this year. This musical tells the fictionalized story of how the real-life Ziegeld Follies showgirl, rose to fame and risked it all for love. Forget the Macy's star — Michele will be the greatest star of this parade.

The Lion King celebrates its 25th anniversary on Broadway in 2022, so the show is commemorating the milestone with a Macy's Thanksgiving Day Parade performance for NBC. The story of a lion cub learning how to claim his destiny and be a successful king, based on the Disney film, has delighted countless audiences of all ages since 1997. Look out for one of the show's iconic songs, like "The Circle of Life" or "Can You Feel the Love Tonight?"

Get The Lion King tickets now.

You can-can-can spend a few minutes in Paris this Thanksgiving when Moulin Rouge! The Musical performs on the CBS Parade broadcast. See a glimpse of this beautiful love story, based on the hit Baz Luhrmann film, about a writer who falls for a showgirl at the title nightclub. The performance from this Tony Award-winning Best Musical is sure to be spectacular!

The Queens are back for another parade! The original Broadway cast of Six performed at last year's Macy's Parade, and the current cast will sing this year on the CBS broadcast. Get down with the wives of Henry VIII this Thanksgiving as they sing catchy pop tunes about their terrible marriages and, eventually, finding their own independent voices.

It will be chilly by November 24, but Some Like It Hot will bring the heat to the Macy's Parade for NBC. This musical adaptation of the classic 1959 film follows two jazz musicians, Joe and Jerry, as they escape the mob by going undercover with an all-female swing band. The leading cast includes Tony Award winner Christian Borle as Joe, J. Harrison Ghee as Jerry, and Adrianna Hicks as Sugar, Marilyn Monroe's role from the film.

Check back for information on Some Like It Hot tickets on New York Theatre Guide.

This new musical about internationally renowned musician Neil Diamond will bring beautiful noise to the parade on the NBC broadcast. The show tells Diamond's story with two actors in his part: one as his young, up-and-coming self, and one as his current older self looking back on his storied career. Macy's Thanksgiving Day Parade watchers will surely hear one, if not more, of his greatest hits — perhaps "America" or "Sweet Caroline."

Check back for information on A Beautiful Noise tickets on New York Theatre Guide.

Who are the Macy's Thanksgiving Day Parade performers?

From Broadway, Funny Girl, Some Like It Hot, The Lion King, A Beautiful Noise: The Neil Diamond Musical, Six, and Moulin Rouge! The Musical will perform. The Radio City Rockettes will also perform a routine from the Radio City Christmas Spectacular.

4 hours ago The Guide Liverpool

The singer took home the Grammy for best dance/electronic music album for her 2022 album Renaissance at Monday’s ceremony – the 32nd Grammy she had won. Social media swirled when she was noticeably missing from the award show’s red carpet. Earlier in the night, Beyonce also picked up the 2023 awards for traditional R&B performance, dance recording and R&B song. Pop duo/group performance winners Sam Smith and Kim Petras appeared together on the red carpet, along with a well-dressed entourage. Lizzo, who won record of the year for her groovy track About Damn Time, spared no theatrics for the red carpet.

7 hours ago The New Daily

Beyoncé has the chance to become the most awarded artist in Grammy history on Sunday. Beyoncé is the top nominee at the 65th annual Grammy Awards, with nine nods, all but one for her dance-heavy album “Renaissance.” (The other is for “Be Alive,” from the film “King Richard.”)She enters this year’s event the winningest woman in Grammy history, with 28 victories. She is tied with her husband, Jay-Z, for the most nods collected by any artist, with 88. A prominent win for Beyoncé could be seen as an overdue make-good, which is something of a Grammy specialty. “We just want her to win album of the year.”

10 hours ago The New York Times

LivePervez Musharraf, the four-star general who ruled Pakistan for almost a decade, has died aged 79. Mr Musharraf died in hospital following a long illness after spending years in self-imposed exile. Pakistan’s military and the country’s mission in the United Arab Emirates announced the death on Sunday. Born in New Delhi in 1943, Mr Musharraf was four years old when his parents joined the mass exodus by Muslims to the newly created state of Pakistan. In 2008, the country’s first democratic elections in 11 years were held and Mr Musharraf’s party lost.

1 day ago The New Daily

1 day ago The New Indian Express

The Nets said Saturday that they found out about Kyrie Irving’s trade demand not from their teammate, but from Twitter. They were already without Kevin Durant, Ben Simmons and T.J. Warren due to injuries before Irving’s injury surfaced. Kyrie Irving requested a trade from the Nets on Friday. We’re here to play, we’re here to do a job, show up and do your job,” Nets coach Jacque Vaughn said. Nic Claxton was taking a nap when news of Kyrie Irving’s trade request surfaced.

U.S. Shoots Down Chinese Spy Balloon Off the Coast of the Carolinas

PinnedWASHINGTON — The United States shot down a Chinese spy balloon on Saturday that had spent the last week traversing the country, American officials said, an explosive end to a drama that put a diplomatic crisis between the world’s two great powers onto television screens in real time. The balloon, which spent five days traveling in a diagonal southeast route from Idaho to the Carolinas, had moved off the coast by midday Saturday and was over the Atlantic Ocean. But Mr. Blinken said the entry of the spy balloon was a “clear violation of U.S. sovereignty and international law.”U.S. officials conveyed to Chinese officials several times in recent days that the U.S. military might shoot down the spy balloon. U.S. officials are now watching closely for China’s reaction to the downing of the balloon — and whether the Chinese military will retaliate against an American asset. Military officials say that China has spy balloons orbiting around the world at 60,000 feet at any given time, and the balloons occasionally stray into American territory.

1 day ago The New York Times

Funny Girl, A Beautiful Noise, Some Like It Hot & The Lion King Set

Viewers can watch the broadcast of the parade on or stream it on Peacock. All about Macy s Thanksgiving Day Parade It's time for the most

This year's Macy's Thanksgiving Day Parade was as Broadway-filled as ever, with a broadcast-opening performance from Funny Girl,

A Beautiful Noise, Some Like It Hot, Funny Girl & The Lion King Set

Macy's Thanksgiving Day Parade is once again bringing Broadway favorites into the celebration. Kicking off this year's 96th annual parade

Give thanks for this lineup! This year's Macy's Thanksgiving Day Parade has set its entertainment lineup, which includes performances from

"The Lion King" to be Among Broadway Performances for 2022

Along with The Lion King cast, there will be other Broadway musicals being showcased during the parade. Lea Michele will be performing a number

FUNNY GIRL, SOME LIKE IT HOT, More Broadway Shows Set For

This year's Macy's Thanksgiving Day Parade will feature performances from several Broadway shows, keeping with the holiday tradition of