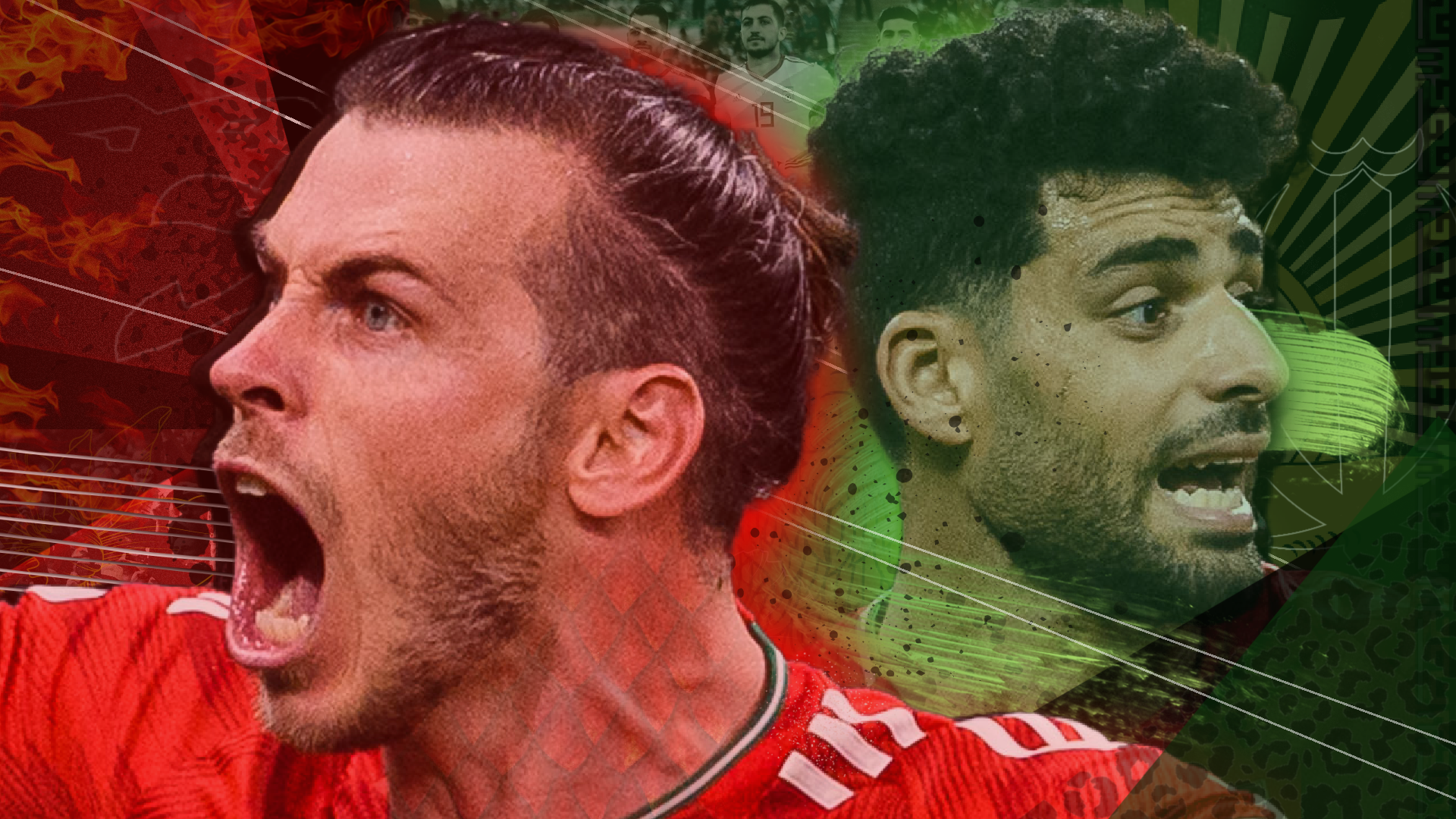 Wales are "ready to give everything" when they take on Iran in their next World Cup game in just under and hours time.

Temperatures could reach up to hit 29C when Wales and Iran take to the pitch at 1pm local time at the 40,000-capacity Ahmad Bin Ali Stadium, Doha.

Hundreds of fans in Doha gathered at the bucket hat corniche on Friday morning as part of a 'pop-up' pre-mach party.

Dafydd Iwan, The Barry Horns, the Urdd choir and plenty of supporters met for a singalong gig before heading off to the stadium.

A sea of red shirts and bucket hats could be seen on the city’s waterfront on Friday, with the crowd belting out fan favourites including Yma O Hyd, I Love You Baby, and the Welsh national anthem.

Iran, ranked 20th by FIFA, have competed in five World Cups before but never made it through the group stages.

They have only met on the grass with Wales once before, at an international friendly in Tehran in 1978, where Wales secured a 1 -0 victory.

Gareth Bale said his team are ready "to give everything" on the pitch against Iran.

Speaking about the game against Iran, Bale - the only goalscorer in Wales' opening World Cup match - said he thinks the clash will be "exciting and entertaining" for fans but also a challenge for his side.

It comes as FIFA reassured those heading to the match on Friday that they will be allowed to wear rainbow bucket hats, after the game against USA saw stadium staff telling fans the items were "banned symbols".

One of those told to remove their hat was former Wales international footballer Laura McAllister, who tweeted a picture of her bucket hat ahead of the game.

The rainbow hats support equality and LGBTQ+ rights. Homosexuality is illegal in Qatar. On Thursday, the Football Association of Wales confirmed that FIFA had said Rainbow Wall bucket hats and flags will be allowed in the stadium for future games.

Key threats in the Iran's team include players like Mehdi Taremi, Sardar Azmoun and Alireza Jahanbakhsh - who all have first-class scoring records.

30 year-old Taremi scored twice in the game against England and has scored 13 goals in 19 games for Portuguese club side Porto.

Bale said: "It's going to be a difficult game, we know Iran are very good but we'll be looking to try and score as many goals as we can.

"Of course we would love to score more goals but football games aren't so easy. We need to play well, we need to be clinical in our finishing but sometimes the teams don't allow you to score that many goals."

"We're going to give everything."

There have been reports that several fans travelling from Dubai to the match on Friday faced visa problems at the airport and risk missing the game.

The Wales Football Supporters’ Association said on Twitter: “Loads (of visas) finally got approved late but this whole process with day permit for Iran game has been difficult for our fans.

“We have informed Fifa and FAW.”

Dozens of fans replied to the post saying they or other supporters had been affected.

Fans with a valid match ticket are able to apply for a Matchday Visit Hayya Card, which is a visa permit that allows entry into Qatar for up to 24 hours.

However, many have reported that they are not being issued in time to board the shuttle flights into Doha.
Continue reading...

Hateful slurs have increased on Twitter since Elon Musk’s takeover

Research by the Centre for Countering Digital Hate (CCDH) contradicts Mr Musk’s claim that a short spike in hate speech after he took charge of the platform has been quickly reversed. The findings come as little surprise to Melissa Ingle who used to be a senior data analyst on the content moderation team at Twitter. We found that contrary to what Mr Musk was saying, hate speech had gone up again”. Imran Ahmed, from the Centre for Countering Digital Hate, says platforms like Twitter are 'monetising misery'. But after the tech world’s most turbulent takeover, its estimated around half of Twitter’s top advertisers have now deserted the site.

Play Brightcove video'Serve for people', shout protesters as anger spreads across ChinaProtests against China's strict Covid controls spread to Shanghai and other cities after complaints they might have worsened the death toll in an apartment fire. Witnesses said a protest occurred in Urumqi, but details of other videos have not been confirmed. Some protesters were shown in videos shouting for Xi to step down or the ruling party to give up power. Most protesters in the videos were members of China's dominant Han ethnic group. Two Urumqi residents who declined to be named for fear of retribution said large-scale protests occurred Friday night.

Wales have begun their World Cup campaign, meeting USA at the Ahmad Bin Ali Stadium in Qatar. Joe Rodon’s blushes were spared when his wayward header cannoned off the chest of Wayne Hennessey, preventing a certain own-goal. Wales’ front three of Gareth Bale, Daniel James and Harry Wilson were largely reduced to bystanders as Aaron Ramsey struggled to influence proceedings. FIFA wants participating nations to focus on football at the World Cup, despite concerns over attitudes towards LGBTQ fans and the treatment of migrant workers. It comes as Wales' Gareth Bale and England's Harry Kane were told not to wear an armband expressing solidarity with LGBT+ people during World Cup games.

A man who prompted the Bristol bus boycotts after he was refused a job has finally received an apology in writing from the city. The letter of apology has been written by the Lord Mayor of Bristol to Guy Reid-Bailey, almost 60 years after the incident. Civic leaders will also endow the Freedom of the City status on Mr Reid-Bailey and five other leaders of the Bristol Bus Boycott. Like many of the other organisers of the bus boycott, Audley Evans went on to help set up what became the St Pauls Carnival in 1967. Bristol has a proud history of peaceful protests – such as the Chartists, the suffragettes, and the Bristol Bus Boycott.

'I felt betrayed': Cristiano Ronaldo claims Manchester United is trying to force him out

Cristiano Ronaldo claims he has been “betrayed” and turned into a "black sheep" by Manchester United and believes they are trying to force him out of the club. When asked if United’s hierarchy were trying to force him out of the club, Ronaldo said: “Yes, not only the coach, but another two or three guys around the club. I felt betrayed.”When quizzed again if senior club executives were trying to oust him, the 37-year-old said: “I don’t care. "For example, we have an interesting point that how the club as Manchester United after (they) sack Ole (Gunnar Solskjaer), they buy – they bring (in), sports director Ralf Rangnick, which is something that nobody understands. A bigger club like Manchester United brings (a) sports director – surprised not only me but all the world, you know.

Musk has now taken over Twitter in a $44 billion deal that places him at the centre of debates ranging from free speech to political misinformation. One immediate question - which will be deeply revealing of his intentions for Twitter - is whether Donald Trump will be allowed back on the social media platform. Elon Musk updated his Twitter bio after he took over the social media platform. Credit: Twitter / ScreengrabAnd a touch bizarrely - well, very bizarrely - he posted a video of himself carrying a sink into the headquarters of Twitter in San Francisco. Musk has a major footprint beyond earth through Space X, on the ground with Tesla, and now in the digital world though Twitter.

Play Brightcove videoElon Musk's takeover of Twitter puts him right at the centre of the social media and free speech debate - Robert Moore reportsElon Musk’s takeover of Twitter could “unravel” years of work to make the platform safer, one campaigner has warned. Ms Gadde is one of several senior figures – including chief executive Parag Agrawal, who have reportedly been ousted after Mr Musk took control of the company. Mr Musk reportedly intends to take on Mr Agrawal's role, according to Bloomberg. Posting on Twitter, she called on the site’s users collectively to lobby the company to commit to continued existing safety standards. He added: "Self-regulation in social media has never worked… even with lesser characters than [Mr Musk's]".

Hello and welcome to our coverage of World Cup Day 6's opening match: Wales v Iran. The Welsh are looking to give keep their dreams of

World Cup: Wales v Iran LIVE NOW · With England blazing a trail out in front in Group B, this match is critical to both these sides' chances.

Wales are hanging by a thread in the second half of their crucial World Cup group match against Iran. Rob Page's side desperately need a win

World Cup 2022, Wales vs Iran Football Match Live Updates: Wales and Iran kicked off the second round of matches at the 2022 World Cup in

Follow all the action as Wales take on Iran in their second game of the 2022 World Cup.