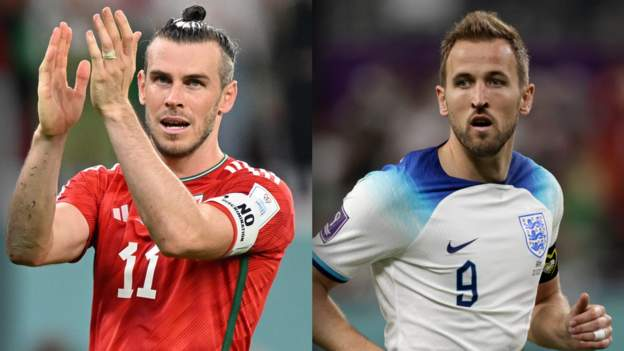 A historic World Cup victory is being chased by Wales on Friday, while England are seeking three points which would secure their place in the knockout stages.

Both nations got off to a steady start in Qatar: Wales drawing with the United States and England easily beating Iran.

And as Wales take to the field for their crucial Group B match with Iran on Friday (10:00 GMT on BBC One), they know a first World Cup victory in 64 years will significantly help their chances of progressing.

Group B rivals and current leaders England also want a win against the USA (19:00 GMT), which will assure them of a place in the last 16 if they can achieve it.

The whole country will have their eyes fixed on Wales' second group game - even those meant to be in class.

Schools in Wales are allowed to cancel lessons to let pupils watch Robert Page's side take on Iran, with more than 1,000 schools expected to take part in "Cymru Football Friday".

Instead of being in Maths classes, children across the nation will be hoping to see Gareth Bale overtake team-mate Chris Gunter as Wales' most-capped man in what could be their decisive match in Group B.

With a point on the board, and leaders England as their final group opponents, Wales know victory will be important if they want to make it through to the knockout stages.

Captain Bale, who has 109 caps for Wales, said it was an "honour" to represent them as he closes in on a milestone appearance.

"But it's more important we try and get the victory," he added. "Hopefully we can and it'll make it even more special.

"It will be a difficult game versus Iran - they are a very good team. They are here for a reason, but of course we believe we can beat them."

Can England get the job done early?

Much the same from England?

That is what many supporters will be hoping to see after a strong start to the tournament by Gareth Southgate's men when they beat Iran 6-2 in their opener.

The USA are up next and England have been given a boost after it was revealed captain Harry Kane will be fit to play despite an injury scare, which involved a scan on his ankle.

As the only team to pick up three points so far in Group B, England know a second victory on Friday will see them progress with a game to spare.

But is there more at stake? Southgate said on Thursday it had been a "good period for English football" and the nation were "regaining our respectability" on the football stage.

"At junior level, at senior level, with our women's team, there's lots of positive things going on," he added.

"We feel we can be competitive for many years to come and that's the aim - to have a sustained challenge in the later stages of the big competitions and we've not done that for years and years.

"These players are putting the country on the map and regaining our respectability on the world stage - we need to keep doing that."

'Wales need to seize their chance' - analysisWales fans, like these supporters in Swansea, sang for their team's first World Cup game since 1958

Bale and Page did not go as far as saying it, but Wales know this game against Iran is essentially must-win.

They were woefully off the pace in the first half against the USA but, thanks to Bale's late penalty, they at least have a point to build on.

With group favourites England looming on Tuesday - and with the USA facing Iran on the same day - Wales do not want to leave it until the last match to claim their first win at a World Cup since 1958.

So they find themselves in a similar position to the one they found themselves at Euro 2020 last year where, after an opening 1-1 draw against Switzerland, Wales beat Turkey 2-0 to secure their passage to the second round despite a 1-0 loss to Italy in their final group game.

Wales would gladly take a repeat if it meant reaching the last 16, even if your average Welsh person would be less keen on England emulating Italy and going on to lift the trophy.

Kane's fitness a huge relief - analysisKane trains before US game

England manager Gareth Southgate is happy with Kane's fitness and made all the right noises about playing his captain from the start.

Southgate's priority is qualifying for the knockout phase as quickly as possible and victory would assure that, opening up the possibility of some squad rotation in the final game against Wales - although every member of England's squad will be desperate to figure in that one.

England's 6-1 win over Iran has been placed into context by the embarrassments suffered by Argentina and Germany and early indications are this could be a very open World Cup.

Kane's fitness is key to England's plans given his outstanding record at this level which leaves him only three goals short of overtaking Wayne Rooney's record of 53 and becoming his country's record goalscorer.

And even though Kane was not on the scoresheet against Iran, he was still a hugely influential figure so the news he has not suffered any serious damage to his foot will have been a huge relief to Southgate and England.

'Germany bow out as fallen giant of world football'

It seems an age since former England striker Gary Lineker coined this memorable phrase - yet it reflects a reality that feels even further away following Germany's latest World Cup embarrassment in Qatar. This is the second World Cup in succession that Germany have failed to get out of their group, suffering the same fate in Russia in 2018. Fifa World Cup: Groups and scheduleGermany beat Costa Rica but still exitWho is through in World Cup and who could join them? "We need to assess our World Cup and head in a different direction. Get the latest results and goal notifications for any team at the Fifa World Cup by downloading the BBC Sport app: Appleexternal-link - Androidexternal-link - Amazonexternal-linkGet your daily dose of Fifa World Cup reaction, debate & analysis with World Cup Daily on BBC SoundsSource: bbc.com

The years of expectation and limited major success appeared to be taking its toll as he suggested last year that the 2022 World Cup would be his last. Brazil boss Tite is certainly happy with the form Neymar has arrived at the World Cup in, saying: "He is flying. Brazil have placed the emphasis on attack for the World Cup in Qatar, with nine forwards named in their squad. Shorn of the weight of expectation, this could be the year Neymar delivers for Brazil at a World Cup. Fifa World Cup: Groups & ScheduleWorld Cup TV Coverage guideGet the latest results and goal notifications for any team at the Fifa World Cup by downloading the BBC Sport app: Appleexternal-link - Androidexternal-link - Amazonexternal-linkGet your daily dose of Fifa World Cup reaction, debate & analysis with World Cup Daily on BBC SoundsSource: bbc.com

We will see 'better Neymar' this World Cup - Silva

The 2022 FIFA World Cup got underway in Qatar with the host losing 2-0 to Ecuador as the fever of the global tournament get started. Today we present you Group 'H', made up of the teams from Portugal, Uruguay, Ghana and South Korea . His best World Cup was in the 2010 edition in South Africa , he came in seventh place (eliminated in the quarterfinals by Uruguay in an exciting match). Portugal and Cristiano Ronaldo's last chance Portugal will play its eighth World Cup. In Qatar 2022 his coach is Fernando Santos , 68, who won a Euro Cup in 2016 and the League of Nations in 2018-2019 .

The final night of Champions League group stage action produced one of the most memorable finales in recent memory. Real Madrid secured their spot as group leaders, while Chelsea and Manchester City cruised to comfortable wins, but the real drama was to be seen in Group H, where PSG lost top spot to Benfica in the most dramatic of fashions. Group EChelsea 2-1 Dinamo ZagrebChelsea had already secured top spot in Group E but put out a strong lineup to secure a 2-1 victory over Dinamo Zagreb. Group FReal Madrid 5-1 CelticThe evening's early action was in Group F, where Real Madrid secured top spot with an emphatic 5-1 victory over Celtic. This article was originally published on 90min as Champions League roundup 2/11/22: PSG lose top spot; Chelsea & Real Madrid cruise.

England will face Poland in their qualification group for the 2022 World Cup in Qatar; Wales take on world number one ranked Belgium in

Euro 2024: England to face Italy & Ukraine in qualification as

England will face Italy and Ukraine in Euro 2024 qualification, while Scotland have Spain and Erling Haaland's Norway to contend with.

The match is a part of the World Cup, Group B. Wales played against England in 1 matches this season. Currently, Wales rank 4th, while England hold 1st position