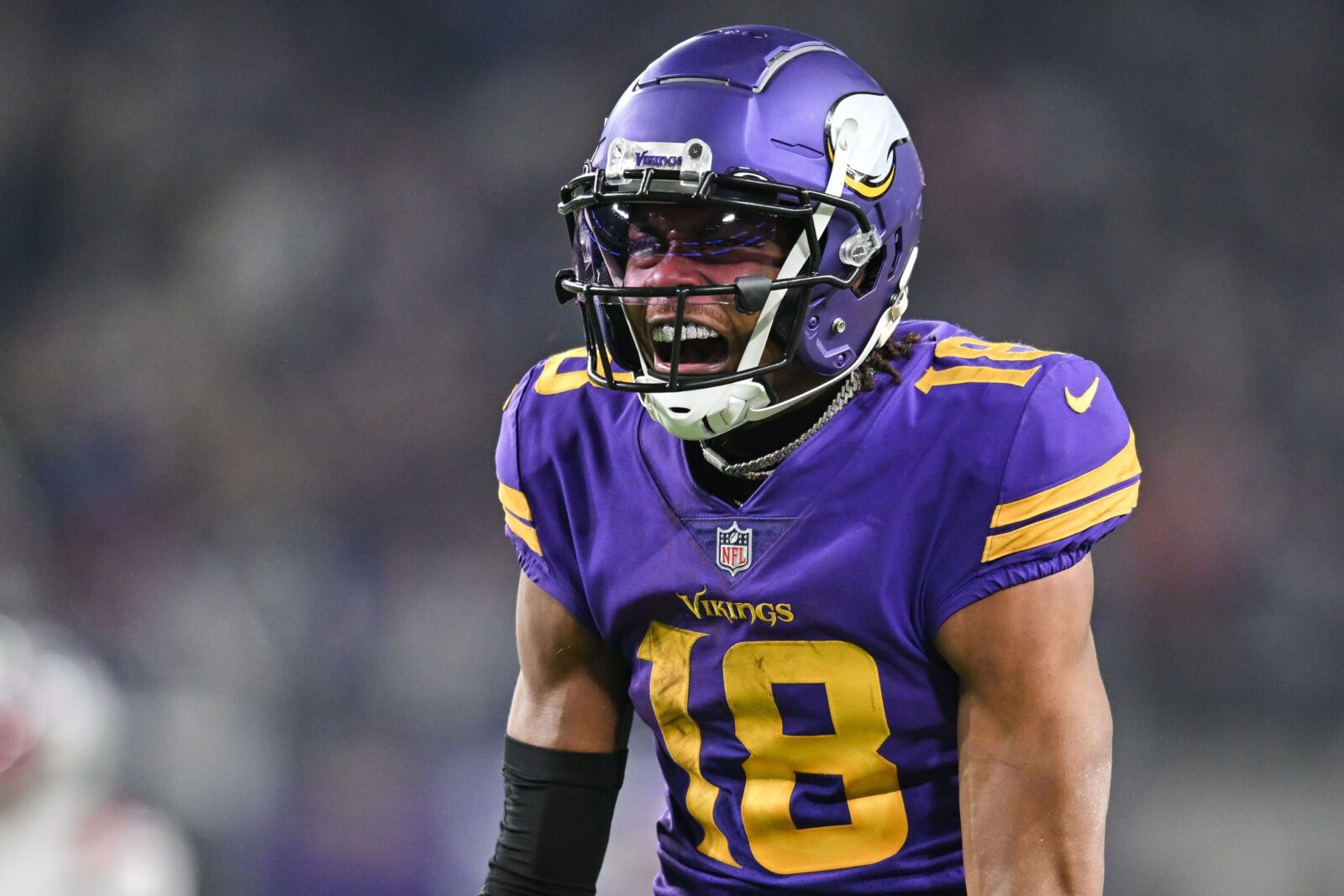 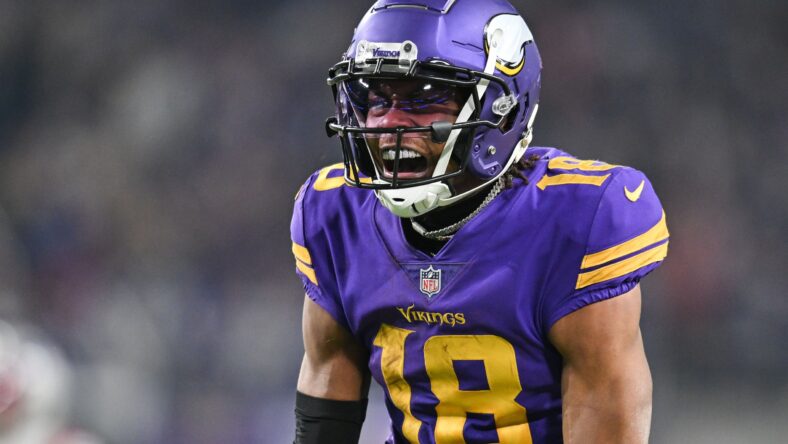 Just four days after one of the more embarrassing home losses in franchise history, the Minnesota Vikings bounced back on Thanksgiving night to deliver an electric offensive performance. The Vikings won a Thanksgiving shootout against Bill Belichick and the New England Patriots by a score of 33-26.

From the get-go, this team felt motivated to come out and put together big numbers on offense as they got back to their usual tricks of putting together a touchdown drive on their opening possession. The Vikings strung together a 10-play, 65-yard TD drive to open the game in which Justin Jefferson caught three passes for 24 yards and the touchdown.

Jefferson came into the game needing just 55 yards to surpass Randy Moss for the NFL record for most receiving yards through a player’s first three seasons. Jefferson did far more than that to break the record, putting up nine catches for 139 yards and that opening touchdown.

After another terrific game in which the 23-year-old receiver surpassed 100 receiving yards for the seventh time this season, there is no one who can say they had more receiving yards in their first three NFL seasons than Justin Jefferson.

The Vikings likely don’t win this game without each and every one of those yards as Jefferson made big play after big play throughout the evening. This included a 36-yard connection late in the fourth quarter between Cousins and Jefferson through a double coverage that should have given any normal person whiplash.

A play later, the Vikings baited Devin McCourty into doubling Jefferson, and Cousins hit an open Adam Thielen for what would be the game winning touchdown.

Overall, this was a great step forward for the Vikings in many facets. Their run defense held strong against New England’s attack, and aside from another missed XP from Greg Joseph, the special teams played extraordinary football too. Kene Nwangwu returned his third career kickoff for a touchdown, and the punt coverage teams did not allow Sidney Jones any room to operate a week after his game-winning punt return TD.

On the other side, Mac Jones played a very strong game as well. The Patriots QB completed 28-of-39 passes for 382 yards and a pair of TDs. If a pass to Hunter Henry on the goal line hadn’t been reviewed and ruled incomplete, this game could have turned out differently.

At any rate, the Minnesota Vikings improve to 9-2 on the year while the Patriots fall to 6-5. The Vikings get a mini bye week prior to Week 13 when they host the New York Jets (6-4) on Sunday, December 4th. Meanwhile, the Patriots host the Buffalo Bills (8-3) on Thursday Night Football, so they only get a typical week’s amount of rest.

Josh Frey is a Class of 2020 graduate of The College of Idaho with a bachelor’s degree in Creative Writing. He also earned minors in History, Human Biology, and Journalism. When he’s not writing about the NFL, Josh enjoys marathon training, playing video games, or rooting for the Milwaukee Brewers and Bucks. For more of his opinions, check out his Twitter account: @Freyed_Chicken.
Continue reading...

The Skol Debate: Are the Packers Still Legit Contenders for the NFC North?

TRADE: Vikings Main Competition in NFC Gets StrongerFeb 6, 2022; Paradise, Nevada, USA; NFC outside linebacker Robert Quinn of the Chicago Bears (94) during the Pro Bowl football game at Allegiant Stadium. Mandatory Credit: Kirby Lee-USA TODAY SportsWell, it seems the Philadelphia Eagles aren’t content with starting the season 6-0 as the Vikings main competition in the NFC gets stronger ahead of the NFL trade deadline. The Eagles completed a trade with one of Minnesota’s NFC North rivals, the Chicago Bears, to acquire star pass-rusher Robert Quinn. Blockbuster: The #Bears are trading star pass-rusher Robert Quinn to the #Eagles, per me and @MikeGarafolo. Quinn has played 10 games against the Minnesota Vikings, recording 5.5 sacks in those games.

Vikings Linked to Texans WR Ahead of Trade Deadline

Vikings Linked to Texans WR Ahead of Trade DeadlineOct 23, 2022; Paradise, Nevada, USA; Houston Texans wide receiver Brandin Cooks (13) is pursued by Las Vegas Raiders cornerback Rock Ya-Sin (26) in the first half at Allegiant Stadium. Even the cap-strapped Minnesota Vikings are getting in on the action, and apparently, they are in the running for one of the whales of the deadline. According to Darren Wolfson of KSTP and SKOR North, the Vikings have been linked to Texans WR Brandin Cooks ahead November 1st’s trade deadline. The Minnesota Vikings clearly have found a way to free up cap space if they are involving themselves with one of the most expensive players on the market. Per Over the Cap, the Vikings are the only team with under $1 million to work with, holding just $851,678.

Should the Vikings Take Another Stab at QB in the 2023 NFL Draft?

The Vikings held off the Pats in a back-and-forth 33-26 thriller on Thanksgiving night, when 11 scores sparked a tie or a lead change.

The New England Patriots lost a shootout to the Minnesota Vikings on Thursday, falling 33-26 in a Thanksgiving night thriller.

Minnesota Vikings Latest News. The Vikings (9-2) won the first home Thanksgiving game in franchise history with a 33-26 victory against

In the first NFL game on Thanksgiving in Minnesota, the Vikings defeated the New England Patriots 33-26 on Thursday night at U.S. Bank

Vikings Write Same Familiar Script in Win Over Patriots on

NFL Week 12 on Thanksgiving Day - Patriots vs. Vikings Live Score: A high-scoring thriller in Minnesota! The Vikings beat the Patriots 33-26

5 takeaways from the Patriots' Thanksgiving Day loss to the Vikings

The Patriots lost to the Vikings, 33-26, in a back-and-forth Thanksgiving Day matchup. New England fell to 6-5 as a result of the defeat.

With a final stop on defense, the Vikings sealed the win 33-26. The Pats offense had one of their best games of the season, but the defense

The Minnesota Vikings had never hosted a game on Thanksgiving Day prior to tonight's matchup with the New England Patriots.

17 minutes ago - SC asks high courts to decide PTI pleas in ECP contempt case at the earliest 18 minutes ago - PM to hold cabinet crisis talks after rail union adds more Christmas strikes 19 minutes ago - RBI MPC: What is it? Why is it important? What do analysts say? Here's all you need to know 20 minutes ago - Yes Bank revises FD interest rates; earn up to 7% on this FD tenure 22 minutes ago - His power secure at home, China’s Xi Jinping goes on a charm offensive abroad 22 minutes ago - Bentonite Market is Projected to Reach US$ 2.81 Billion in 2028 22 minutes ago - England fan who witnessed 1966 World Cup final win hopes for repeat in Qatar 23 minutes ago - When to Expect the Peripheral Season 2 Release Date? 28 minutes ago - Below Deck’s Fraser Olender shares 'struggle' of Chief Stew role: 'Not here to be friends' 29 minutes ago - Tom Brady throws for 2 late TDs, Bucs beat Saints 17-16 31 minutes ago - Scarlet Fever and invasive Group A strep 37 minutes ago - Letters to the Editor | Dec. 6, 2022 40 minutes ago - Opinion: In every Ukrainian kitchen, a secret weapon against Putin 41 minutes ago - How Old Was Sandra Bullock in the Proposal? The Film Grossed Over $137 Million! 42 minutes ago - Conservative SCOTUS majority under scrutiny in major ‘independent legislature’ elections case 48 minutes ago - Grand Canyon National Park 51 minutes ago - Rookie Nembhard has 31, leads Pacers past Warriors, 112-104 54 minutes ago - Salesforce (NYSE:CRM) Price Target Cut to $225.00 1 hour ago - Transgender Journey: Mutability of Identity 1 hour ago - Commonwealth Bank of Australia : CBA announces rate changes 1 hour ago - Waterlooville pupil believed to have died from Strep A infection 1 hour ago - Sunburn — The morning read of what’s hot in Florida politics — 12.6.22 1 hour ago - Monday's Sports In Brief 1 hour ago - Kroo bank account: Is it better than Monzo or Starling? 1 hour ago - Elon Musk's brain-implant firm Neuralink under scanner over animal abuse 1 hour ago - A Disastrous Pre-Sale: Taylor Swift Fans Sued Ticketmaster 1 hour ago - Ronaldo eyes World Cup quarters as Morocco dare to dream 1 hour ago - Lawsuit alleges writer-director James Toback is a 'serial sexual predator' 1 hour ago - Innovation finance evidence pack (HTML) 2 hours ago - Brady throws for 2 late TDs, Buccaneers beat Saints 17-16 2 hours ago - How Cinema Audience Behavior Has Been Changed by COVID – CineAsia 2 hours ago - World Cup Viewer’s Guide: 2 Quarterfinals Places Left 2 hours ago - Rosenthal: MLB’s massive free agent spending is just beginning. Explanation of forces at work. 2 hours ago - Elon Musk fever in EU's poorest country Bulgaria in anticipation of his visit 2 hours ago - Neuralink: Elon Musk's plan to implant a chip in the human brain: Why? - 2 hours ago - Tom Brady and Bucs figure out how to beat Holy people on game-dominating TD in conclusive seconds 2 hours ago - What Consumer Duty means for smaller advice firms 2 hours ago - Brazil-Argentina semi-final moves another step closer 2 hours ago - James Harden returns as 76ers deliver another dud in loss to Rockets 2 hours ago - Hospitality: The growth of hospitality courses abroad: Here is what you should know, Hospitality News, ET HospitalityWorld 2 hours ago - Tatum Leads Celtics Over Raptors, Pacers Beat Warriors 2 hours ago - Attacks on Russian air bases put spotlight on new Ukrainian drone program 2 hours ago - Musk’s Neuralink faces federal probe over animal tests 2 hours ago - Morocco Dare To Dream: Cristiano Ronaldo Eyes World Cup Quarterfinals 3 hours ago - Tatum leads Celtics over Raptors; Curry struggles vs Pacers 3 hours ago - Tom Brady and the Bucs find a way to beat the Saints on a game-winning TD in the dying seconds 3 hours ago - Nelly & Ashanti Steamy Performance Has Fans Calling For The Former Couple To Reunite 3 hours ago - Kirstie Alley’s Kids: Everything To Know About The Late Star’s 2 Children 3 hours ago - Kirstie Alley: A mainstay of the screen in the 80s and 90s as Cheers propelled her to stardom 3 hours ago - Uddhav vs Eknath Shinde : Supreme Court To Hear Petitions Related To Shiv Sena Rift On January 13, 2023 3 hours ago - Cincinnati hires Louisville’s Satterfield to replace Fickell 3 hours ago - Was Kirstie Alley a scientologist? Beliefs explored as the actress passes away at 71 3 hours ago - India resumes e-visa service for UK travellers: What is it and how is it different from regular visas? 3 hours ago - Sixers Coach Doc Rivers Calls for Rule Change After Joel Embiid Mishap 3 hours ago - Odds, line, and spread for 76ers vs. Rockets:2022 NBA picks, Dec. 5 from a reputable computer model 3 hours ago - NBA roundup: Rockets outlast Sixers in double OT 3 hours ago - Rookie Nembhard scores 31, Pacers stun Warriors 112-104 3 hours ago - Kirstie Alley, ‘Cheers’ Star, Dies At 71- Cause Of Death Explained 3 hours ago - Salesforce (NYSE:CRM) Reaches New 1-Year Low Following Analyst Downgrade 3 hours ago - Yankees won’t make Aaron Judge wait as long for a decision as offseason