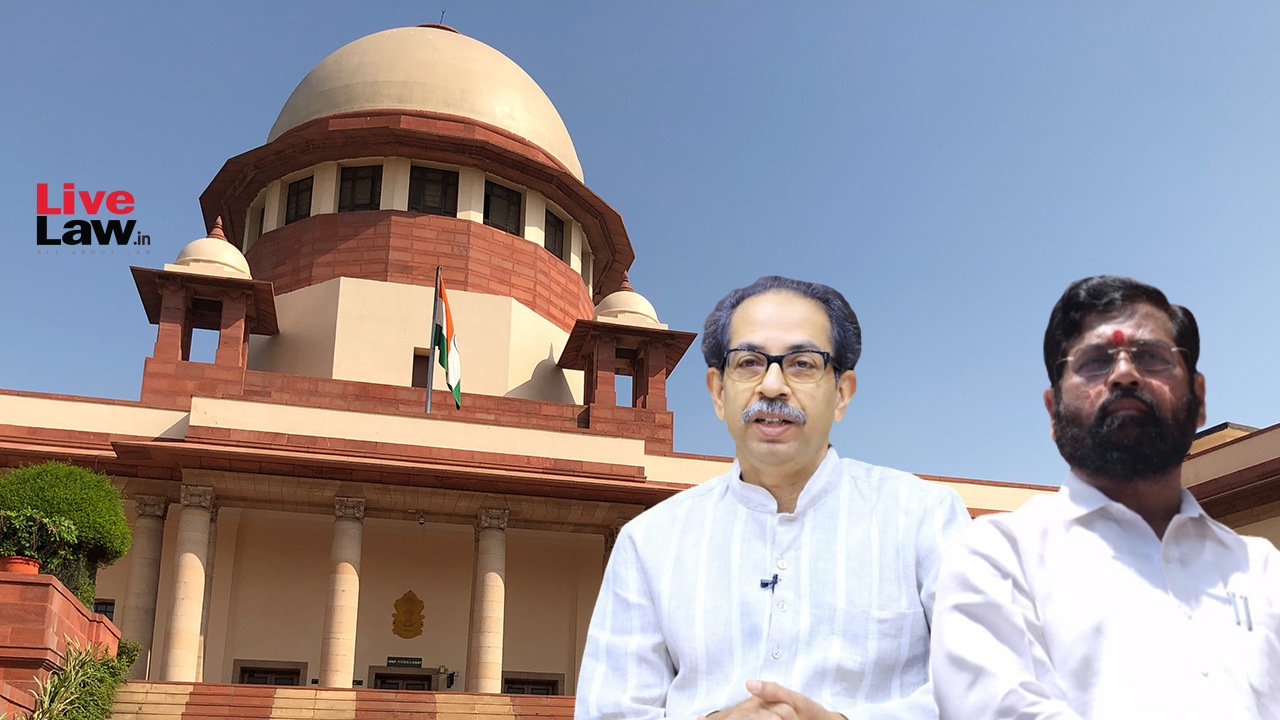 The Supreme Court on Tuesday posted the batch of petitions filed by both the Uddhav Thackeray faction and the Eknath Sindhe faction in relation to the political crisis in the State of Maharashtra, for directions, on 13th January, 2023. The matter was mentioned before a bench comprising CJI DY Chandrachud and Justice PS Narasimha. The matter was initially supposed to be posted for directions on 29th November 2022.

CJI Chandrachud, while hearing the mentioning today remarked that the matter could be now posted in the month of January for directions. Senior Advocate Devadatt Kamat for Uddhav faction requested the hearings to be commenced at an earlier date. However, CJI Chandrachud stated that the same would not be possible owing to the following week being a miscellaneous week in the Supreme Court. He said–

"Next week won't be possible because it will be a miscellaneous week. It will not be possible for five judges to sit in a Constitution Bench. Let us keep this for directions on 13th January 2023."

On September 27, the Constitution Bench hearing the matter had rejected the plea made by Uddhav group to restrain the Election Commission of India from deciding the claim made by Shinde group that it is the real Shiv Sena.

Issues for consideration in the matter

The 3-judge bench comprising Chief Justice of India NV Ramana, Justice Krishna Murari and Justice Hima Kohli, that had referred the petitions to the Constitution Bench had framed the following 11 issues for its consideration -

A. Whether the notice of removal of the speaker restricts him from continuing the disqualification proceedings under Schedule X of the Indian Constitution as held by the Court in Nabam Rebia;

B. Whether a petition under Article 226 and Article 32 lies inviting a decision on a disqualification proceeding by the High Courts or the Supreme Court as the case may be;

C. Can a court hold that a member is deemed to be disqualified by virtue of his/her actions absent a decision by the Speaker?

D. What is the status of proceedings in the House during the pendency of disqualification petitions against the members?

E. If the decision of speaker that a member was incurred disqualification under the Tenth Schedule relates back to the date of the complaint, then what is the status of proceedings that took place during the pendency of the disqualification petition?

F. What is the impact of the removal of Para 3 of the Tenth Schedule? (which omitted "split" in a party as a defence against disqualification proceedings)

G. What is the scope of the power of the Speaker to determine the whip and leader of house of the legislative party?

H. What is the interplay with respect to the provisions of the Tenth Schedule?

I. Are intra-party questions amenable to judicial review? What is the scope of the same?

J. Power of the governor to invite a person to form the government and whether the same is amenable to judicial review?

K. What is the scope of the powers of Election Commission of India with respect to deter an ex parte split within a party.

Background of Petitions before the Constitution BenchPetition preferred by rebel Shiv Sena leader Eknath Shinde (now the Chief Minister) challenging the disqualification notices issued by the Deputy Speaker and plea filed by Bharat Gogawale and 14 other Shiv Sena MLA's seeking to restrain the Deputy Speaker from taking any action in the disqualification petition until the resolution for removal of Deputy Speaker is decided. On June 27, the division bench of Justices Surya Kant and JB Pardiwala had extended the time for the rebel MLAs to file written responses to the Deputy Speaker's disqualification notice till July 12.Petition filed by Shiv Sena Chief Whip Sunil Prabhu challenging the Maharashtra Governor's direction to the Chief Minister to prove majority of Maha Vikas Aghadi Government.Petition filed by Sunil Prabhu, the whip appointed by Uddhav Thackeray-led group, challenging the action of the newly elected Maharashtra Assembly Speaker recognizing the whip nominated by the Eknath Shinde group as the Chief Whip of Shiv Sena.Petition preferred by Mr. Subhash Desai, the General Secretary of the Shiv Sena assailing the decision of the Maharashtra Governor to invite Eknath Shinde to be the Chief Minister of Maharashtra and challenged the further proceedings of the State's Legislative Assembly held on 03.07.2022 and 04.07.2022 as 'illegal'.Petition preferred by 14 MLAs of Uddhav camp challenging the initiation of illegal disqualification proceedings against them under the Tenth Schedule by the newly elected Speaker.

He kept Chris Wood quiet for the most part and while Sam Surridge did ask different questions in the second half, his impact was still limited. Marsch has a decision to make at the back now with Koch eligible to play once more on Wednesday night against Manchester United. He couldn’t really get a foothold in the game in the second half, either, and he was replaced by Rutter in the 67 th minute. A tough afternoon for the England international and it seems Jesse Marsh could have a decision to make up front when Leeds go to Manchester United on Wednesday night. Leeds UnitedResults over the weekend really piled the pressure on Leeds to get a result on the banks of the Trent.

Winless in 11, system questions - One up and four downs for Blackpool from Middlesbrough loss

Muskegon also sent a 2023 Phase I 10th-round pick to Tri-City along with Richard. Jake Richard made his Tri-City debut Friday night in a 4-1 loss at Omaha. This was Richard's second season in Muskegon as Richard played 56 games with the Lumberjacks last season. So I’m thankful for my time there, but I’m looking forward to bringing that to Tri-City now. “I’m excited to be on a winning team and I want to win a championship.

1 day ago The Rink Live

A fan has released a song dedicated to Eddie Howe after Newcastle United reached their first cup final in more than two decades. (Image: Chronicle Live)Junior, who has been a season ticket holder since 1991, said: "The reaction has been phenomenal. He said: "When I got my season ticket it was the Kevin Keegan era - the entertainers - and there was a waiting list for a season ticket. Back in 2015, he dedicated a song to Newcastle fans John Alder, 63, and Liam Sweeney, 28. He released "United We Stand" on the first anniversary of the tragedy.

Managers are paid to make difficult decisions and Julen Lopetegui made several when naming his Wolverhampton Wanderers starting line-up for the match with Liverpool today. It was even more unclear which of Nathan Collins and Max Kilman that Dawson would replace in the team. Dawson marshalled Wolves’ back-line to perfection in the first half, constantly cajoling and controlling Kilman alongside him. While Dawson and Kilman were able to repel most of the visitors’ threat, they relied on wasteful finishing at times too. He might not be what Wolves need in the long-term, but right now he is everything this team has been missing.

A roller coaster game played out at Villa Park as Aston Villa fell to a disappointing 4-2 defeat against Leicester City. Unai Emery ’s side got back in front courtesy of an own goal from one of Leicester’s three new signings, with Harry Souttar sticking out a leg to divert Watkins’ cross beyond Danny Ward. @DiscusDan: Mistake after mistake cost us today. Form and performances at Villa Park really has to improve for us to reach our goals. Tell us in the comments section…READ NEXT:Jhon Duran shooting, Unai Emery message, new faces and other things spotted at Aston Villa trainingWhat Aston Villa can really expect from Jhon Duran as Unai Emery confirms Leicester decisionUnai Emery reveals what Nassef Sawiris wants Aston Villa to becomeWhat Unai Emery said about Tyrone Mings future amid Aston Villa transfer decision

But, assuming Eddie Howe sticks to his recent script and refuses to change a winning team, he will have an unprecedented embarrassment of riches to choose from among his substitutes. If Howe replaces Elliot Anderson (valued only at €3.5m) with Gordon, that bench value will rise to a value of €156.3m - easily the most in Newcastles history. Newcastle United - €156.3mAssuming Gordon doesn’t immediately get his chance in the starting line-up, Eddie Howe has a lot of talent waiting for their chance. But even big names like Harry Maguire (€30m), Tyrell Malacia (€25m) and Fred (€20m) couldn’t propel their combined bench value above any of the top Premier League sides. Click HERE to get your copy as Newcastle United prepare for a historic day out at Wembley.

Five players were ejected after a fight broke out and punches were thrown during the game between the Orlando Magic and Minnesota Timberwolves on Friday night in Minneapolis. The brawl started in front of the Orlando bench late in the third quarter. Minnesota guard Austin Rivers and Magic center Mo Bamba were the initial players involved, and it spilled over to include several others on the court. On this night, the fight began with Rivers right in front of the Magic bench as play was ongoing at the far end of the court. The NBA announced punishments for both players Friday, with Brooks getting suspended one game without pay and Mitchell fined $20,000.

Maharashtra MVA Crisis: Uddhav Thackeray on Wednesday hit out at the rebel Shiv Sena MLAs, including Eknath Shinde, saying that he was ready

After the EC froze the name and election symbol of Shiv Sena, the Uddhav Thackeray camp dubbed Maharashtra CM Eknath Shinde and his

Who Is Real Shiv Sena? EC Says None; Asks Thackeray And

Former Maharashtra CM Uddhav Thackeray held a meeting at Matoshree with his Shiv Sena faction, and urged them to remain calm.

Eknath Shinde claimed that he has the support of 46 MLAs, including six to seven Independent MLAs. As of today, the Shiv Sena leader and