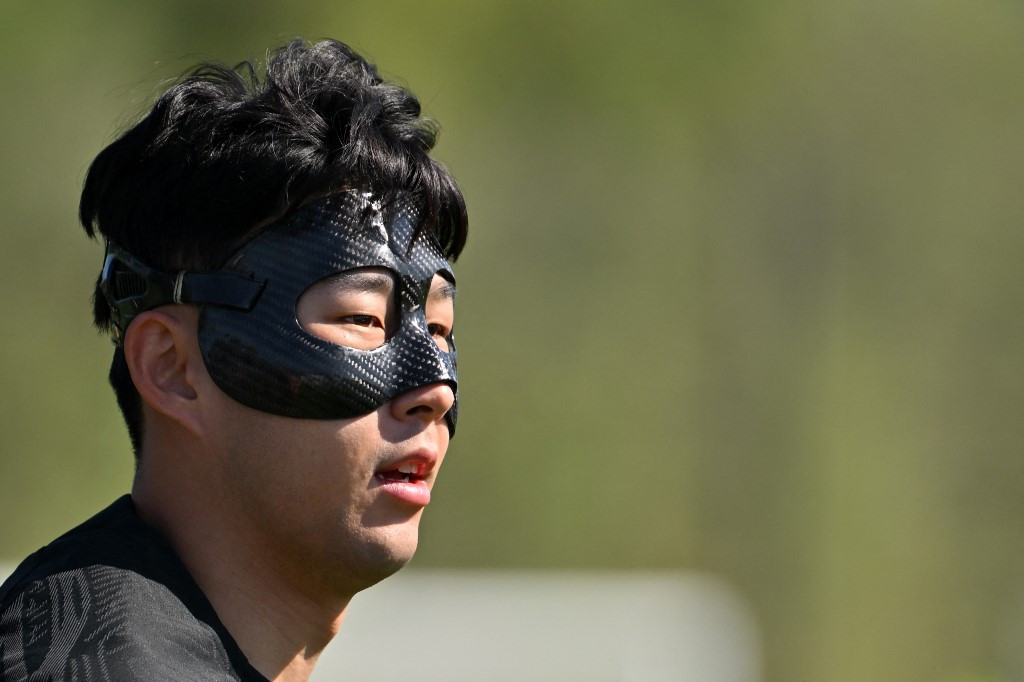 Son Heung-min will be able to play in South Korea's opening World Cup match against Uruguay on Thursday despite wearing a mask after facial surgery, coach Paulo Bento said.

The Spurs attacker and South Korean skipper had surgery earlier this month after suffering a fracture around his left eye in a collision during a Champions League game.

"Son can play and will be able to play," Bento said on Wednesday.

It remains to be seen to what extent the South Korean talisman features, with the Portuguese boss cautioning: "He knows and we know that after this injury we cannot take any risks."

The 30-year-old Son has been training in Qatar in a mask and South Korean fans have been eagerly awaiting updates on his fitness.

At one training session in Doha the mask appeared to be troubling Son as he went through fitness drills with the rest of the squad.

Bento insisted the mask was "natural" for the player, who has scored 35 times in more than 100 internationals and shared the Premier League Golden Boot last season with Liverpool's Mo Salah.

"The fact he will be wearing a mask is not inconvenient for him," said Bento.

"We have stuck to the plan since we arrived here, also the way we integrated him into our group shows he has been natural.

"We will see tomorrow how it will be. Our hope is that he will feel comfortable as far as possible."

Wolves forward Hwang Hee-chan is, however, unlikely to feature because of a hamstring problem.

Uruguay, who boast veteran attackers Luis Suarez and Edinson Cavani, plus younger talents such as Federico Valverde and Darwin Nunez, will be favourites to win the opening Group H match.

But coach Diego Alonso said the two-time winners would be wary of South Korea whether or not Son is involved.

"Obviously Korea do not only have this player," he said. "I have lots of respect for Son, but Korea also have other players, they are very well trained, have a good coach, a very good XI, we respect everyone."

After Lionel Messi's Argentina were on the end of a shock loss to Saudi Arabia on Tuesday, veteran captain Diego Godin said Uruguay would have to "tread carefully".

The Koreans reached the semi-finals of the 2002 World Cup, which they jointly hosted with Japan, but failed to get beyond the group stage at the past two tournaments.

"We have a lot of respect for our opponents, we know we're up against a great team," said Godin. "They're very competitive, they're very dynamic, with good individual players who also have a particular way of playing."

The 36-year-old is one of a number of veterans for Uruguay playing in their fourth World Cup, alongside Cavani, Suarez, Fernando Muslera and Martin Caceres.

In the other Group H game on Thursday, Ghana face Cristiano Ronaldo's Portugal.

The San Diego Padres have shocked the baseball world yet again with a player acquisition. A monster contract and the Padres, after missing Trea Turner and Aaron Judge, get the longtime Red Sox shortstop. — Pete Abraham (@PeteAbe) December 7, 2022Momentum between the Red Sox and Xander Bogaerts according to a source. The Padres viewed Xander Bogaerts as perhaps the best hitter among this free-agent class' top shortstops. — Dennis Lin (@dennistlin) December 8, 2022Turner signed an 11-year, $300 million deal with the Philadelphia Phillies on Monday, while Judge signed a nine-year, $360 million deal to return to the New York Yankees on Wednesday.

15 minutes ago The Comeback

Hundreds of journalists and other employees at The New York Times began a 24-hour walkout on Thursday in the first strike of its kind at the newspaper in more than 40 years. Over 1,100 New York Times workers are now officially on work stoppage, the first of this scale at the company in 4 decades. The NewsGuild also said the company told employees planning to strike they would not get paid for the duration of the walkout. Members were also asked to work extra hours get work done ahead of the strike, according to the union. The New York Times has seen other, shorter walkouts in recent years, including a half-day protest in August by a new union representing technology workers who claimed unfair labour practices.

27 minutes ago The Mercury News

Simone Fontecchio dunked with 1.4 seconds remaining off Nickeil Alexander-Walker’s steal and the Utah Jazz beat the Golden State Warriors 124-123 on Wednesday night in a matchup of short-handed teams. Stephen Curry, Draymond Green and Andrew Wiggins sat out for Golden State, while Utah was missing Lauri Markkanen and Mike Conley. Jordan Poole tied a season high with 36 points for Golden State and Jonathan Kuminga had a season-high 24. We were neither of those things the last 13 seconds,” Golden State coach Steve Kerr said. … Golden State scored 20 points off 17 Utah turnovers.

30 minutes ago The Press Democrat

Staffers are also urging readers to express solidarity with their cause by boycotting Times products for the day — including the addictive Wordle game. It’s the first major walkout at the Times since 1981 — a work stoppage that lasted for just six-and-a-half hours. In 2017, Times staffers staged a brief, lunchtime walkout to protest staff cuts and other changes to copy-editing operations. AdvertisementThe dispute comes as several media companies are laying off employees, citing a challenging economic environment. Times employees said they rescheduled interviews and delayed work on major projects in advance of the walkout.

1 hour ago The Comeback

1 hour ago The Economic Times

Son Heung-min will be fit enough to feature for South Korea in their World Cup opener against Uruguay on Thursday.

DOHA - South Korea's Son Heung-min will be able to play with a mask in their World Cup Group H opener against Uruguay on Thursday (Nov 24),

Son likely in mask for South Korea vs. Uruguay at World Cup | Sports

Son Heung-min is likely to mask up as South Korea faces Uruguay in their Group H opener at the World Cup in Qatar.

Son likely in mask for South Korea vs. Uruguay at World Cup

DOHA, Qatar (AP) — Son Heung-min is likely to mask up as South Korea faces Uruguay in their Group H opener at the World Cup in Qatar.

Uruguay vs South Korea prediction: How will World Cup fixture play out? · Darwin Nunez is in action for Uruguay, while Son Heung-min has overcome

DOHA : South Korea's Son Heung-min will be able to play with a mask in their World Cup Group H opener against Uruguay on Thursday,

Uruguay and South Korea battled to a goalless draw in their Group H opener in the 2022 World Cup. The South American side started with Liverpool

Uruguay's ageing frontline of Luis Suarez and Edinson Cavani counts against them, but South Korea lack a cutting edge too despite being able to

ANKARA. Uruguay and South Korea played out a goalless draw in their Group H opener at the 2022 World Cup in Qatar on Thursday.