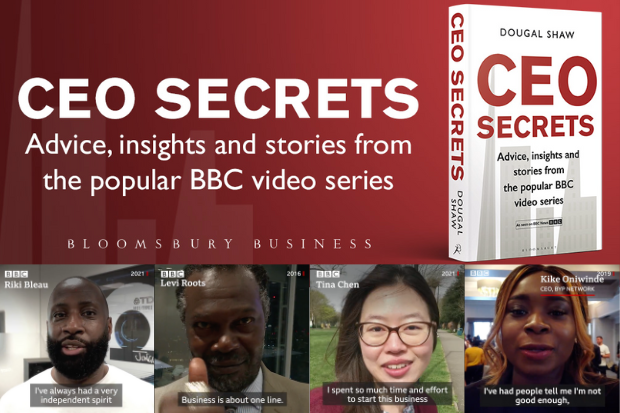 News series, on the other hand, have the advantage of constantly building towards a bigger narrative and a growing contact book.

Shaw is the creator of the broadcaster's popular news series, CEO Secrets. It started in 2015 as a 'pep talk with top professionals',. Seven years later, the series is still going strong, providing informal career advice from prominent business leaders.

First and foremost, CEO Secrets is a social media series designed to pull in audiences from Instagram, Facebook, and in recent years, LinkedIn - where the series feels right at home, in front of the BBC News' 8m followers. But the best pieces often find their way on TV for the World Business Report and they also feature in the website's business section.

What are the secrets to creating a long-running news series? Shaw shared some tips on the Journalism.co.uk podcast.

The most essential part of your series is your initial idea. It needs to be simple enough to replicate and not too demanding to produce. It can help to think about wasted opportunities within your news organisation.

Shaw pitched CEO Secrets as a way to quickly grab interviewees that would be in the building anyway, after giving more formal business interviews about financials and economics.

The first ever guest was Sir James Dyson back in 2015, known best for inventing the Dyson vacuum cleaner. It is a short and sweet, 45-second interview with his tips for starting a business, looking straight into the camera lens for a distinctively informal style.

It is a tried-and-trusted journalistic approach to put a new spin on an old news story. This works well for features, too.

Another series Shaw has run is My Shop, looking at the origins of quirky independent shops. That idea came from Humans of New York, a hit photo series by Brandon Stanton, built on the premise that everyone has an interesting story to tell if you talk to them long enough.

Tip: Look at what has been successful in the wider media world and put your own spin on it.

Humans of New York eventually became a New York Times' best-selling book. CEO Secrets has trodden a similar path, having just been published as a book compiling the best advice from the seven-year series.

You may not initially want your series to become a physical product but you may want to reversion it in another medium. It could also be worth preserving the nuggets of wisdom that you have to sacrifice along the way.

The book came about because Shaw felt that so much good advice over the years was lost in the editing process.

"The nature of news is you move on very quickly. But I couldn’t forget about all the amazing things these people had said, thinking: 'It's a shame it's wasted'. With a book, you can go back and be efficient and reuse great content," says Shaw.

Tip: Preserve unpublished material worth sharing and turn it into a new medium.

Brainstorming meetings are rarely useful for conjuring up ideas. The best ideas come when your mind is left to drift when you are on the commute or doing the dishes.

Read more: Here is how to find new story ideas

Meetings can be useful to get feedback from colleagues though. For instance, CEO Secrets has over time started to introduce smaller business owners as a result of colleagues pitching in.

Shaw says: "Just make it. You only learn by actually getting your hands dirty and understanding what the pitfalls are and what people don’t like. Get a pilot version out there and listen to your colleagues."

Tip: Prioritise getting things done and improve your work gradually.

CEO Secrets is a mobile journalism series, meaning Shaw shoots and edits videos on his iPhone 12 (with an iPhone 6 as a backup option). He usually uses a handheld plastic rig to shoot video, with lighting options rarely needed.

Read more: Five tips to get started with mobile journalism

iPhones 6 and upwards can shoot in 4k, providing enough resolution for the TV. It is lightweight, meaning on-the-fly interviews in corridors are quick and easy.

Smartphones shoot video well, but Shaw recommends using an app like FiLMiC Pro. The biggest pitfall is audio, as the phone's internal microphone is built for close-range calls.

You can invest in an adaptor that will plug into the lightning port and then hook up a broadcast microphone. A cheaper option is to use clip-on or lapel microphones which can plug straight into the phone.

Smartphones have a hidden upside: they help settle guests. Even media-trained CEOs can get unnerved by a large broadcast camera and teams of producers hovering about.

"It does help when it’s done with a mobile phone: an object they have themselves, it definitely relaxes them and it means you get a better contribution because they open up more."

Tip: Use your smartphone to shoot videos to help your interviewees relax.

CEO Secrets has now grown to the point where Shaw can receive 20 pitches a day. So who deserves to be spotlighted?

"It's a gut feeling deciding which ones work," he says. Potentially boring companies - in terms of what they do - could have amazing personal stories behind them. Big shot CEOs might be in 'advert mode' and just be in it for the PR.

These days, the show commands dedicated appearances rather than ad hoc interviews. It means more time can be spent pre-interviewing and scoping out the angle.

He recommends picking guests who lend themselves to visual elements. In his case, does the business have a striking visual product that you can film?

There is also the question of representation: most pitches put forward are from PRs representing middle-aged, white men entrepreneurs. Shaw is keen to promote women and people from different ethnic backgrounds on his show. The message matters above all else though, and guests should be able to go beyond repetitive, generic advice.

"That’s a story about sexism in the workplace," he explains. "That’s not just a business story, it has a wider resonance. Those are the sort of stories I will always gravitate towards."

Tip: Choose inspiring stories that will spark curiosity or action in your audience.

When interviewing experts, especially for advice-led series, be mindful that their advice might be applicable to you.

"It’s a bit like a startup journey: having an idea, piloting it, getting stakeholders involved, tirelessly pushing it, trying to get people interested in it.

"Everything I’ve learned from interviewing for the series, I’ve internalised that advice and I have to use it myself," concludes Shaw.

Tip: Be entrepreneurial and treat your series as if it were your company.

Join the Journalism.co.uk news channel on Telegram to receive news and updates straight to your phone every week

If you like our news and feature articles, you can sign up to receive our free daily (Mon-Fri) email newsletter (mobile friendly).

BBC Radio 4 are producing an 8-part Splinter Cell drama series in which Sam Fisher trains a new generation of recruits.

Seven Tips For Surviving Jazz Fest With Your Toddler

ITV Racing Tips - Seven horses to back at Haydock and Ascot

Tips and selections for all seven ITV races on Saturday 20th November; Four races will be shown live from Haydock Park on Betfair Chase day

Oprah Winfrey is producing a documentary about Sidney Poitier

Oprah Winfrey is executive producing a documentary about Sidney Poitier - which she has been working on for over a year - with Apple.