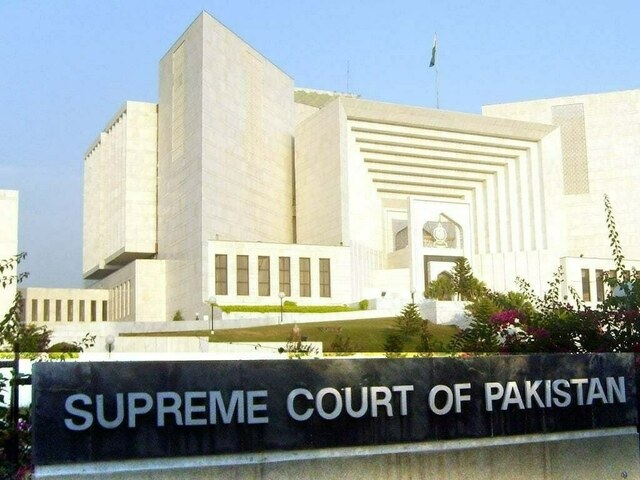 ISLAMABAD: The Supreme Court has summoned former senator Faisal Vawda on Friday (today) to regret and admit that he misstated before apex court and the high court about his dual nationality.

A three-judge bench, headed by Justice Bandial, on Thursday, heard an appeal of Vawda, against the verdicts of the Islamabad High Court (IHC) and the Election Commission of Pakistan (ECP), disqualifying him for life under Article 62(1)(f) of the Constitution.

The chief justice said if Vawda admits and regrets that he misstated before the High Court about his dual nationality and before the Supreme Court he relied upon his cancelled passport to show that had renounced the US nationality well before. If he does this then will be disqualified under Article 63(1)(c), but if he contests his case then he could be disqualified under Article 62(1)(f) of the Constitution.

The bench then ordered Waseem Sajjad, representing Faisal Vawda, to bring the gentleman on Friday at 10:30 am and provide his Certificate of Loss of Nationality of the United States.

The CJP said: “We have enough material about misstatement,” adding “this is [a] factually clear case that the petitioner (Vawda) made efforts to mislead the court.”

The CJP further said with disqualification under Article 62(1)(f) the consequences follow.

He asked the counsel that you wanted to say that the process of 62(1)(f) should be applied carefully, and due process has not been followed in this case.

Justice Ayesha asked Waseem Sajjad that now your client says that I am not a dual national. But there is an affidavit submitted by him. If you have given the wrong affidavit, and it is proved that the affidavit was false then criminal proceedings are separate. Justice Mansoor said that affidavit submitted before the Election Commission is purely constitutional.

The chief justice said when the eligibility of Vawda was challenged then he should have said he made a mistake and has relinquished the assembly membership. But Vawda challenged the matter in every forum, including the Supreme Court. He asked Waseem Sajjad whether his client wanted electoral disqualification or lifetime, adding the lifetime disqualification will have serious consequences.

An ECP bench, led by Chief Election Commissioner Sikander Sultan Raja, had disqualified PTI’s Vawda for concealing his dual nationality with a direction to return the salary and other benefits he had received as a minister and National Assembly member within two months. He was also de-notified as a senator.

In March 2021, Vawda resigned as an MNA after being elected as a senator and his lawyer contended that a dual nationality case against the lawmaker was “not valid now”.

In his petition, Vawda has sought to set aside a declaration by the ECP on February 9 which led to his disqualification as a lawmaker for life.

In order to incur a penalty under Article 62(1)(f), there must be mens rea (criminal intent) as well as evidence before a court of law, the petitioner said, but “both are missing in the ECP’s pronouncement”.

Davila last month ordered Holmes to serve 11 1/4 years in prison. As he did with Holmes, the judge said he’ll decide later how much restitution Balwani must pay. Balwani, 57, chose to remain silent rather than make a statement to the judge before he was sentenced. While Holmes was acquitted of charges she defrauded patients, Balwani was convicted on those counts. Balwani had “significant autonomy in running the lab” at Theranos, prosecutor Jeffrey Schenk told the judge at Wednesday’s hearing.

Why This Market Rally Is So Dangerous; Tesla Nears Bear Lows On This Move

Spain is ready for penalties towards Morocco at World Cup

It is advisable to take no less than 1,000 penalties along with your membership,” Luis Enrique recounted Monday. – Commercial –Spain was additionally eradicated in a penalty shoot-out on the 2018 World Cup, by host Russia. If you happen to’ve skilled for that always, then the best way you’re taking a penalty will enhance,” Luis Enrique mentioned. You’ve seen it in our coaching periods,” Luis Enrique mentioned by means of a translator. “Tak, tak, tak, tak, tak till the gamers are drained.”For inspiration, Morocco is seeking to Japan’s win over Spain within the ultimate set of group video games, when Japan had solely 17% of the possession.

By continuing to browse or use our sites, you agree that we can store and access cookies and other tracking technologies as described in this policy. What are Cookies and Other Tracking Technologies? The information provided below about cookies also applies to these other tracking technologies. How do our sites use Cookies and Other Tracking Technologies? You may refuse to accept browser Cookies by activating the appropriate setting on your browser.

Kirstie alley, Emmy-winning actress and singer passes away at the age of 71. She was battling’recently diagnosed’ cancer.

Pentagon debuts its stealth bomber, B-21 Raider amid concerns with China

The B-21 Raider is the first new American bomber aircraft in more than 30 years. Ahead of its unveiling Friday at an Air Force facility in Palmdale, California, only artists' renderings of the warplane have been released. Those few images reveal that the Raider resembles the black nuclear stealth bomber it will eventually replace, the B-2 Spirit. The Air Force previously put the price for a buy of 100 aircraft at an average cost of $550 million each in 2010 dollars -- roughly $753 million today but it's unclear how much the Air Force is actually spending. The new Raider will also get new hangars, to accommodate the size and complexity of the bomber, Warden said.

By continuing to browse or use our sites, you agree that we can store and access cookies and other tracking technologies as described in this policy. What are Cookies and Other Tracking Technologies? The information provided below about cookies also applies to these other tracking technologies. How do our sites use Cookies and Other Tracking Technologies? You may refuse to accept browser Cookies by activating the appropriate setting on your browser.

Thursday’s report from the Commerce Department showed that prices rose 6% in October from a year earlier. At the same time, after-tax income, adjusted for inflation, rose 0.4%. In recent months, inflation has eased from the four-decade highs it reached earlier in the year. The Fed is believed to monitor the inflation gauge that was issued Thursday, called the personal consumption expenditures price index, even more closely than it does the government’s better-known consumer price index. The PCE price index also seeks to account for changes in how people shop when inflation jumps.

SC Freiburg: Bundesliga today on TV and live stream. If you want to watch Hertha BSC vs. SC Freiburg live and in full today, you can only do so

Mumbai Police on Saturday, 11 June, issued a summons to suspended BJP Spokesperson Nupur Sharma, in connection with the case pertaining to

[PDF] In re Disqualification of Synenberg - Supreme Court of Ohio

disqualification of Judge Joan Synenberg from acting on any further proceedings the Court of Common Pleas of Cuyahoga County.

How to find Spirit Ash summons in Elden Ring - Upcomer

Kolkata Police summons suspended BJP spokesperson Nupur Sharma for answers for their questions If it's a court case it's different.

Spirit Summons give you a huge advantage when fighting tough opponents in Elden Ring. The game has countless Spirit Summons within the game

A court in Pakistan rejected the plea of former Prime Minister Imran Khan, who requested suspension of his disqualification order.