Richarlison Brings Brazil to Life in the Second Half, Defeats Serbia 2-0 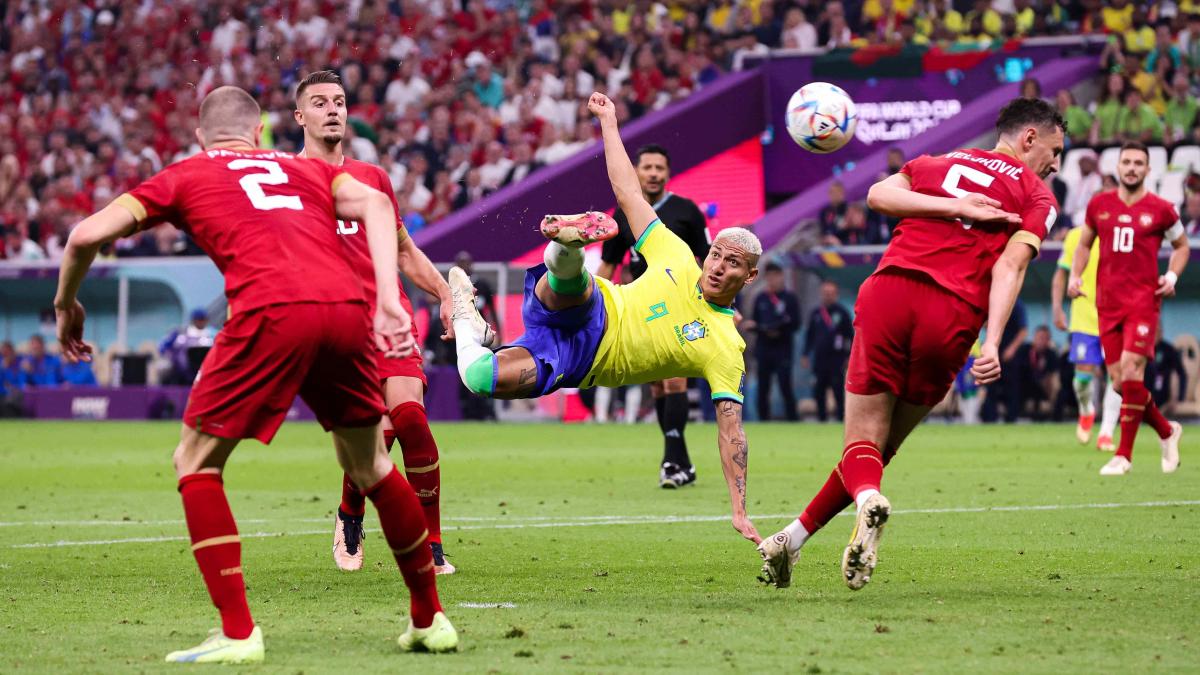 It’s safe to say, the canary yellow shirt is perhaps the most famous in the entire sports world. The boys in Brazil had a lot on their plate this Thanksgiving – and we don’t just mean turkey.

After an exciting Group G brawl at Lusail Stadium, No. 1 ranked Brazil defeated their counterparts in Serbia 2-0.

Serbia’s Vanja Milinković-Savić managed to disrupt Neymar and Vinicius Junior’s first few attempts at goal in the starting minutes. One of the closest opportunities to score was in the 28th minute with a Neymar-Junior duo corner kick and later a header by Casemiro that landed straight to Junior in the center.

Raphinha also had an opportunity to score in the 30th minute after a short corner kick that came right back to him, but the winger’s attempt was no match for Milinković-Savić ball-handling at goal.

He had another attempt in the 34th minute but the short kick right inside the goal box landed comfortably in Milinković-Savić’s hand – his third save of the day so far.

Serbia’s Andrija Zivkovic had a few opportunities himself, especially towards the end of the first half, but nothing was good enough to get past Alisson Becker’s hands at goal.

In the 40th minute, Junior had a solid run and shot on goal before Milenkovic made it back in time to make the tackle, but again, not enough to land anything.

It was an exceptional first half for Serbia, the 21-ranked team, who held off Brazil, ranked No. 1 and favored to win the tournament, for 45 minutes on Thanksgiving Day. Serbia has never even gotten out of a Group Stage of the World Cup since their independence from Yugoslavia. Will they change history this year?

It was a scoreless first half in Lusail – the fourth of the day and the eighth of the tournament.

The second half began with another close attempt for Raphinha, perhaps his closest so far, quickly followed by a short run by Neymar, which resulted in a free kick just outside the box and a yellow card for Serbia. With Raphinha alongside Neymar as a decoy, the kick amounted to nothing and the next play resulted in two Serbians down.

In the 59th minute Brazil’s Alex Sandro had a great strike that came right off the post – the closest opportunity for the canary yellow so far. With 30 minutes to go, Brazil led in 13 shots to one, though no score on the board.

Neymar’s effort finally paid off in the 62nd minute when his short pass to Junior resulted in a tap from Richarlison and finally a goal on the board for Brazil.

And just 10 minutes later, Richarlison enhanced the cushion to 2-0 after an incredible assist by Junior. The 25-year-old forward popped up the ball over his shoulder with a scissor kick into the corner of the back of the net. Two attempts … two goals.

Trump and Walker remained in contact and after Walker retired from professional football he was invited in 2009 to appear as a contestant on "The Celebrity Apprentice." — Herschel Walker (@HerschelWalker) January 4, 2021Trump retweeted Walker, adding his own message: "Herschel is speaking the truth!" “Herschel Walker will never let you down,” Trump promised said in a statement endorsing Walker. Georgia deserves better than Herschel Walker. Throughout it all, Trump did not set foot in Georgia in the home stretch of the campaign.

New York Mets reportedly sign starting pitcher Jose Quintana to two-year, $26 million dealDoes it make sense for the Mets? Coming off his headline-monopolizing, 62-homer contract year, Judge is reportedly re-signing with the Yankees on a nine-year, $360 million deal. Haniger, who has consistently produced power when on the field, is an easy bet to like at a $14.5 million average annual value. FanGraphs' crowdsourced projections pegged Turner for a seven-year, $210 million deal. The Athletic's Ken Rosenthal reports it's a two-year, $86.66 million deal with a vesting third-year option.

Highlights Brazil vs Serbia, FIFA World Cup 2022: Brazil defeated Serbia in the match 16 of the FIFA world cup 2022 by 2-0 and topped the table

Brazil vs Serbia - LIVE! Brazil striker Richarlison scored twice including a spectacular swivelling volley to get his nation's quest for a

Serbia, who did not have a shot on target, were already creaking when Richarlison pounced for the first goal and the game was over once he

On Android and well as iOS, the 2022 FIFA World Cup will be live streamed on JioCinema. Where can you watch the Brazil vs Serbia match outside