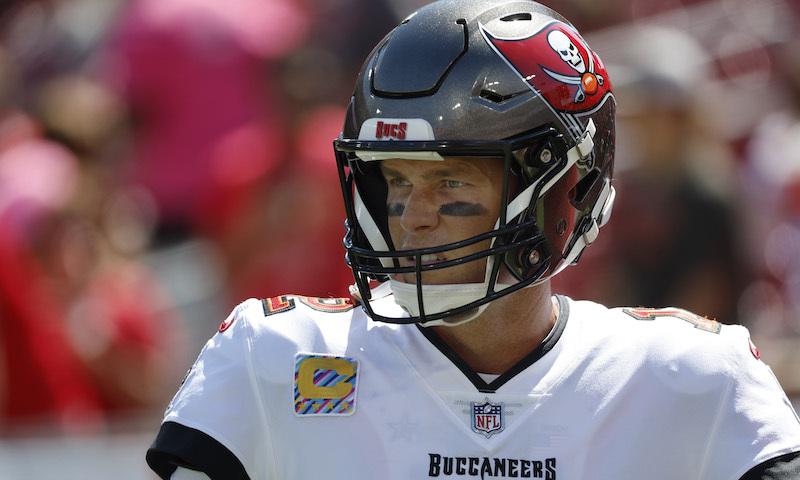 The NFL wrote a schedule with the clear intent to feature an excellent primetime matchup in Week 8. Before the season, the Ravens versus the Buccaneers looked wildly exciting relative to the more recent primetime offerings. Nobody projected the Ravens’ defense to be a turnstile and to struggle to lead his team to a 4-3 record. More importantly, nobody could have predicted the Buccaneers would be 3-4 with back-to-back losses to and . With both teams in disarray, we hope the teams regress to our preseason projections.

On paper, this game looks like a great primetime matchup. Let’s build a same game parlay ticket on FanDuel Sportsbook.

FanDuel pegs the Bucs as 1.5-point home favorites this evening with an implied game total at 45.5 points. The juice currently rests on the -1.5 and on the over. Per SAO, 77% of betting tickets over the week printed on the Ravens side while the money has been more of an even split. 66% of betting tickets sided with the under throughout the week but the line has moved up a couple of points.

On the injury front, we have plenty to sift through. The Buccaneers will be without the services of and as both are already ruled out. will be a GTD with his knee injury. Antoine Winfield, Jr. is likely out after his concussion while Carlton Davis is out with his hip injury.

For the Ravens, a last-minute view of the injury report will be critical. Ronnie Stanley, Marlon Humphrey, and Marcus Peters are questionable but practiced in full on Wednesday. and got limited practice in while was a DNP throughout the week. All three are questionable for tonight. The fact that this game is a quick turnaround could lead to some additional rest for the three offensive players.

At some point, the Buccaneers need to figure this out and get back on track. While a couple of the defense players being missing is a big concern, the Ravens’ defense has struggled more than enough to bring me plenty of confidence a motivated Buccaneers team can bounce back at home.

The overabundance of betting tickets being printed on the Ravens’ point spread while the number continued to drive towards Tampa Bay seems fishy to me. Fading the public is often not the worst idea and we will ride with the Buccaneers to cover at home.

Speaking of getting right, has looked pretty awful this season. Perhaps, retirement wasn’t the worst option, after all.

Nonetheless, Brady is here and continuing to press on. The Buccaneers continue to pass the football at the highest clip in the NFL (67.4%) with the short-passing game often being an extension of the run game. The Ravens have allowed 6.9 yards per pass attempt and 261.3 passing yards per game.

I think this is a 300+ yard passing game for and company and think this correlates well with a Buccaneers win. ParlayIQ agrees thus far as we are offered a better price on FanDuel already than what ParlayIQ suggests.

So, now we get into some negative correlation for our FanDuel one game parlay. Normally, when legs don’t necessarily correlate the price that FanDuel spits out at us is a bit juicier. Conversely, if we tie everything to overs on the Tampa Bay passing offense, FanDuel is very likely going to suppress the price some because of the correlation.

In this instance, should receive more than enough volume to exceed this rushing total. ParlayIQ is utilizing RotoGrinders’ NFL Stat projections for the simulations we are using to help us build our parlay. We have Fournette projected for more than 15 carries and nearly 60 rushing yards.

The discrepancy alone justifies the price of this leg. 64% of the nearly 5,000 simulation of tonight’s game have Fournette going over this total. Given the negative correlation and the -110 tag on FanDuel, this leg is sure to give us a pretty hefty boost in price.

Finally, we include one Ravens’ over just for the negative correlation. The Buccaneers have allowed 5.5 yards per carry to quarterbacks this season. scampered for 61 yards against the Bucs on seven carries in their recent matchup.

is a big play waiting-to-happen. The uncertainty for both and might mean that Lamar is forced to run more frequently. Lamar averages more than 9 rushing attempts per game and should be efficient enough to exceed this total if he can find that sort of volume.

Even if both and both play, Jackson is still live to hit this over. His rushing total exceeded 70 yards in four of his seven starts this season with two of the misses just below 60 yards.

When we include this leg, the simulations and ParlayIQ offer use a price that pales in comparison to what FanDuel is tempting us with. Let’s take a look at the pricing difference below.

So, ParlayIQ offers the following suggestion for this ticket:

Delightfully, FanDuel Sportsbook offers a monstrous discrepancy. FanDuel is daring us to make this bet because of the leg. I am going to put my faith in the simulations.

Good luck with all of your bets and plays this evening. Share your parlays with me on Twitter and any other plays you are making for the game. First touchdown scorers? Touchdowns? DFS lineups? Thanks for reading.

Noto’s NFL Positional Breakdown & Expert Plays: Week 13This DFS content is a part of our Premium Content Schedule and designed to help you build better lineups on DraftKings, FanDuel, Yahoo!, SuperDraft, and other daily fantasy contest providers. Access NFL Projections, Expert Rankings, Projected Ownership, NFL DFS Picks, and other Data Tools using this content hub. Week 13I got more right than wrong in Week 12, but it was a losing week thanks to one mistake in particular. has essentially been a lock for 20+ fantasy points each week and has racked up 243 rushing yards over the last two games. I have targeted Jones a ton the last month, so it stung to miss out on his big game last week.

NBA DFS Expert Survey: Sunday, November 27thWant to know who we are paying up for in NBA DFS today? I still think he’s a strong play tonight, as the fewest number of minutes he has received in the last four outings is 36. Krayton: scores 40 actual points and 70 total fantasy points tonight. eys819: puts up a 30-point triple-double on the top defense in the league and goes for 75+ fantasy points. TJ Zwarych: eclipses 60 fantasy points en route to becoming the highest scoring player on the slate.

Bengals vs. Titans Odds, Picks, and PredictionBengals vs. Titans OddsBengals Odds -1.5 Titans Odds +1.5 Over/Under 42.5 Date Sun, Nov. 27 Time 1:00 p.m. TV CBSOn Sunday afternoon, and the surging Cincinnati Bengals will travel to Nashville to battle and the Tennessee Titans. Cincinnati BengalsJa’Marr Chase has not played since Week 7 against the Atlanta Falcons, but his absence has not had a major impact on the Bengals’ offense during that stretch. In eight games with under center, Tennessee has scored 20 points, 7 points, 24 points, 24 points, 21 points, 19 points, 17 points, and 27 points – averaging only 19.9 points per game. Facing a healthy Cincinnati run defense, Henry could struggle with efficiency once again, which could make life difficult for the Titans’ offense. Bengals vs. Titans – Picks & PredictionsThe Bengals’ offense has played extremely well in each of their last two games, but they will have a tough test in this spot against a Titans’ defense that ranks 8th in defensive EPA/play since Week 3.

49ers vs. Cardinals Odds, Picks, and Prediction49ers vs. Cardinals Odds49ers Odds -10 Cardinals Odds +10 Over/Under 43 Date Mon, Nov. 21 Time 8:15 p.m. TV ESPNThis week’s edition of Monday Night Football will feature the San Francisco 49ers against the Arizona Cardinals in Mexico City. Oddsmakers are expecting the 49ers to roll to a comfortable victory in this one, pricing San Francisco as 10-point road favorites on the spread. San Francisco 49ersThough many pundits question the long-term viability of under center for San Francisco, he has proven himself more than capable of keeping this offense competitive on a weekly basis. This group is unlikely to improve dramatically upon any of their season-long defensive metrics against an extremely talented San Francisco offense. 49ers vs. Cardinals – Picks & PredictionsThe default look in many primetime games this season has been the under, due to the high percentage hit-rate in such contexts.

Finding Paydirt: Week 8 NFL Touchdown Picks — Win 2 Months of RG Premium & More Prizes! We will start with the leaderboard and then make some Week 8 Anytime Touchdown picks. Running Back Wide Receiver Tight EndNow that we have made our cuts, let’s make some anytime touchdown picks. NFL Week 8 Touchdown Picks– RB – $6,500is now the feature back — and likely feature player — for the Seattle Seahawks. Leave your touchdown picks in the comments for a chance at winning monthly and seasonal prizes.

Buccaneers OddsRavens Odds +1.5 Buccaneers Odds -1.5 Over/Under 46.5 Date Thu, Oct. 27 Time 8:15 p.m. TV AmazonThis evening, Week 8 of the NFL regular season will begin with a matchup between the Baltimore Ravens and Tampa Bay Buccaneers on Thursday Night Football. Oddsmakers are expecting a tightly-contested affair between these two teams, pricing Tampa Bay as a 1.5-point home favorite on the spread. Fortunately for this Baltimore offense, they get to face a Tampa Bay defense that will be missing numerous key pieces in the secondary in this matchup. Tampa Bay BuccaneersFollowing a 2-0 start to the new campaign, and company have fallen to 3-4 as the calendar prepares to flip to November. Buccaneers – Picks & PredictionsAfter seven games, the Buccaneers’ offense ranks 20th in EPA/play overall, 32nd on the ground, and 11th through the air.

Bengals vs. Ravens same-game parlay: Odds and top picks for

Bengals vs. Ravens same-game parlay picks Ravens moneyline (-177): If not for a pair of hair-pulling collapses against Miami and Buffalo, in

Check out our top same game parlay odds, picks, and predictions for the NFL Week 2 contest: Buccaneers vs. Saints. All odds courtesy of