Quick takeaways from the Lions loss to the Bills on Thanksgiving

The Detroit Lions and Buffalo Bills treated a sellout crowd in Ford Field and a national television audience to an entertaining and highly competitive game to kick off Thanksgiving. The Lions took the heavily favored Bills down to the wire but ultimately fell short in a 28-25 loss.

The undermanned Lions had their chances. Dan Campbell’s team largely punched above its weight class, but they weren’t quite sharp enough to score the upset knockout. It’s both a very frustrating end to the three-game win streak but also an indication that the Lions are quickly improving into a team that should be taken seriously.

Here are a few quick takeaways from watching the game in real-time.

The Lions pulled off the rare feat of both playing well enough to beat a really good team but also bad enough that a good opponent not playing its best football was able to escape with a win.

Detroit took a lot of shots in this game. Many were effective, but too many pointed straight down into the Lions’ own paws. Among the most impactful self-inflicted wounds:

Jamaal Williams fumbling when hit from behind by Bills DT Ed Oliver D’Andre Swift missing a potential TD pass from Jared Goff Michael Badgley missing a FG, his first miss all season Goff going down for a safety instead of trying to throw the ball away Austin Bryant committing a very dumb roughing-the-passer penalty

The clock management at the end of the first half was suboptimal as well.

The Lions are not a talented enough team to win against a good opponent when they make so many key mistakes. But dang, they’re close!

James Houston has an impressive debut

James Houston had spent his entire rookie season on the Lions’ practice squad. He made his NFL debut on Thanksgiving and proved that maybe he should get more chances in the near future.

Houston, a sixth-round rookie defensive end from Jackson State, made a huge impact on his very first NFL play. He recovered a Kalif Raymond fumble on a punt return after the Bills’ first offensive possession.

Houston was only getting started. The swift rookie sacked Bills QB Josh Allen not once but twice, including a critical sack just before halftime to force a field goal attempt instead of a potential touchdown drive by Buffalo.

It was great to see Houston rise up to the occasion. Playing only because Josh Paschal and Charles Harris were out with injuries, Houston showed considerable improvement over his preseason and training camp performances.

The mini-bye is sorely as the injuries continue to mount 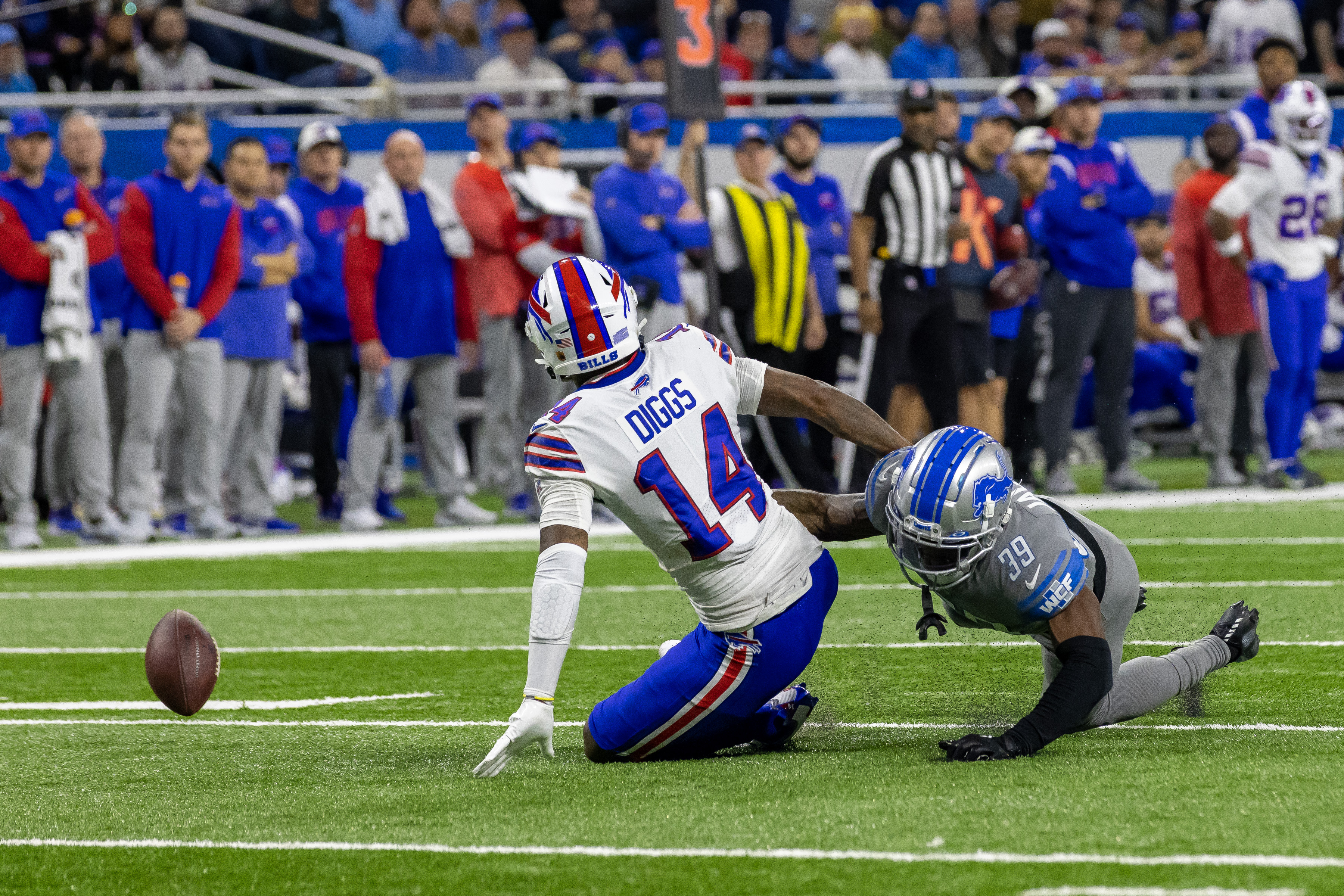 The Lions played this game without both regular starting guards, Evan Brown and Jonah Jackson. Top cornerback Jeff Okudah and the two-man DE rotation of Josh Paschal and Charles Harris that plays opposite Aidan Hutchinson were also out.

Unfortunately, the Lions suffered a few more injuries in the game. DE Julian Okwara left with an elbow injury that did not look good. CB Jerry Jacobs, who played very well against top Bills WR Stefon Diggs, departed late in the game with an apparent head injury and was sent straight to the locker room.

Wideouts Kalif Raymond and Amon-Ra St. Brown were both shaken up during the game but stayed in the action. It was a physically brutal game on a short week. The Lions can definitely use the extra three days of rest before hosting the Jaguars in Week 13. 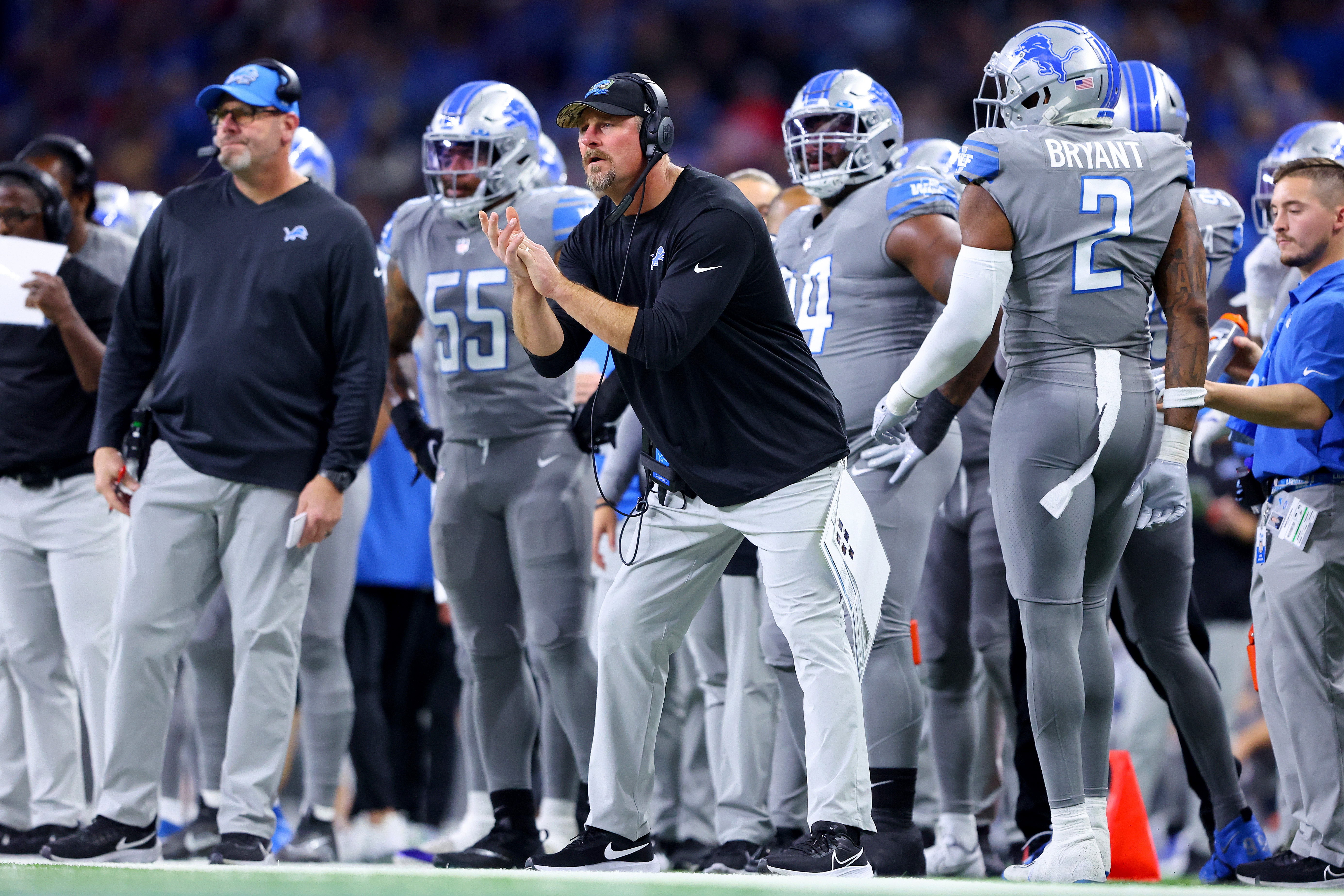 Detroit’s final offensive drive was mired in controversy for the decisions and calls. Here’s my take:

I applauded the idea to drain the clock. Josh Allen does not need much time to lead the Bills down the field, something he proved very quickly. I liked the strategy for the clock to hit :00 on the Lions’ final play, and that sure appeared to be what the plan was…until it wasn’t.

The Lions had plenty of time and timeouts at their disposal. The third-down call to take a deep shot to WR DJ Chark was a terrible choice. That’s just not a throw Goff has proven he can make. Quite the opposite, actually; Goff badly missed Chark in almost exactly the same situation and call in Week 3. He overshot Kalif Raymond by a good five yards on this exact route earlier in this game.

The play design and aggressive shot wasn’t a bad idea in and of itself, but when the quarterback has proven he cannot hit that play, it makes it a poor decision. Get the first down and more shots, with the added benefit of regulation ending on your own last play. There’s just too much that can go wrong on that play to try it, and that played out. 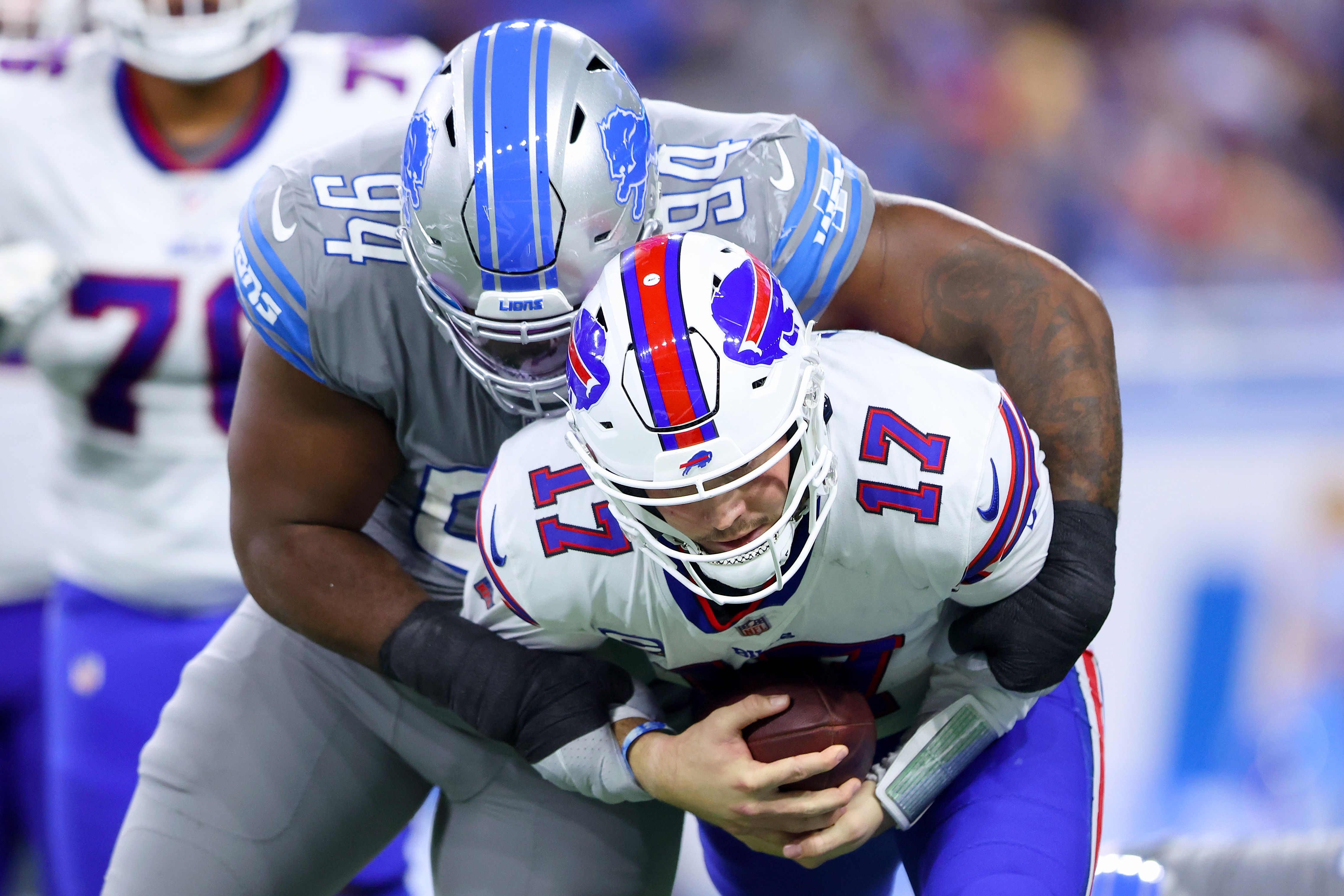 –Goff did not have a strong game but he remains very effective in the red zone. The TD throw to Chark, where the pay was designed to go to Raymond on the other side, is a play Goff doesn’t make in Detroit in 2021 or early in 2022. He’s had a few of those lately and that’s very real progress.

–Brock Wright continues to grow quickly as a blocker at tight end. His down-blocking (crashing inside) has become very good in a hurry.

–Jerry Jacobs played very well in coverage on Stefon Diggs. He’s great at limiting yards after the catch and that is a very underappreciated trait for a cornerback.

–Holding was clearly not something the officiating crew was interested in calling on either team.

–D’Andre Swift continues to be so incredibly frustrating. He made a couple of fantastic plays in this game, but also twice as many where he showed why he’s not getting on the field as much.

–This week’s film review spotlight will be on the replacement guards, Kayode Awosika and Dan Skipper. The early impression was not great for either, especially in pass pro for Awosika.

–Detroit has such a rich musical history and the NFL gives us a head-scratching, boo-worthy performance at halftime. That’s shameful. Nothing against Bebe Rexha, but that was not a smart choice for that crowd.

Pearl Harbor changed that. In my lifetime, the closest event to Pearl Harbor in shock and scope was 9/11. The U.S. played a dangerous game with Japan, and paid for it at Pearl Harbor. And if it’s any guide, there is another Pearl Harbor waiting for us out there. In 2019, the last chapter Pearl Harbor Survivors Association officially disbanded.

14 hours ago The Daily Wire

PHOTOS: The top images from Commanders' Week 13 tie vs. Giants

Chiefs stock watch: Which players impressed during Week 13 vs. Bengals

The Kansas City Chiefs fell short on the road to the Cincinnati Bengals in Week 13, losing 27-24. A disappointing finish as both sides of the ball didn’t execute effectively in the fourth quarter, and Kansas City’s record dropped to 9-3, falling out of the AFC’s top seed. Here’s a look at how the stock is trending for some players after the Week 13 loss in Cincinnati.

The Indianapolis Colts played the Dallas Cowboys tough for three quarters until it became completely unraveled in the fourth quarter. After making it a 21-19 game with 3:43 left in the third quarter, the Cowboys took over the game and never looked back. Which was followed up by a Mo Alie-Cox fumble that was returned for a touchdown by former Colt, Malik Hooker. Matt Ryan would go on to throw his second interception of the night which led to another touchdown for the Dallas offense. Here are my five takeaways from the loss on prime time:

Regal Glory was handled by Flavien Prat as he won his fifth race of the day and ensured he would be the leading rider at the meet. He subsequently won the nitecap on the Del Mar card and finished with 24 firsts in 86 mounts, a very healthy 36% winning rate. Then she did and we were all right,” said PratChad Brown trains Regal Glory and he was capturing his fifth edition of the stakes, including last year’s running. Regal Glory now will be retired from racing. As the 3/5 favorite, Regal Glory paid $3.20, $2.20 and $2.20 across the board.

3 days ago Past The Wire

The Brooklyn Nets hosted the Boston Celtics on Sunday and lost 103-92. Kevin Durant had 31 points, seven rebounds, and five assists for the Nets while Kyrie Irving had 18 points and eight rebounds. Durant was the offense for the Nets in this game and the Celtics have too good of a team defense for one person to beat them. The Nets lost this game because of poor ball-handling and poor transition defense. Here are the Nets’ player grades for their loss to the Celtics:

The Cincinnati Bengals came firing out of the gates against the Kansas City Chiefs in Week 13 and ultimately won, 27-24. — Defense got gashed a bit on the Chiefs’ first drive, especially as the Chiefs exploited the weakness to screens it showed last week against the Titans. — Defense coughed up a seven-play drive over 77 yards for a Chiefs touchdown to start the second half. RB Samaje Perine: Play after play after play. Could have been a three-and-out by the Bengals defense in the red zone.

6 takeaways from the Detroit Lions' loss to the Buffalo Bills

8 Takeaways from Lions' 28-24 Loss Against Vikings

There are no morale victories in the NFL. But something felt different about the Detroit Lions' 28-25 Thanksgiving loss to the Buffalo

Takeaways from the Cleveland Cavaliers' 127-124 loss to the

Takeaways from the Cleveland Cavaliers' 127-124 loss to the Minnesota Timberwolves. Cleveland's new jerseys are like the Lorax,

2022 Lions vs. Bills Thanksgiving preview - From Pride Of Detroit

Full coverage for the Detroit Lions' Week 12 matchup against the Buffalo Bills for the 2022 Thanksgiving Day Classisc.