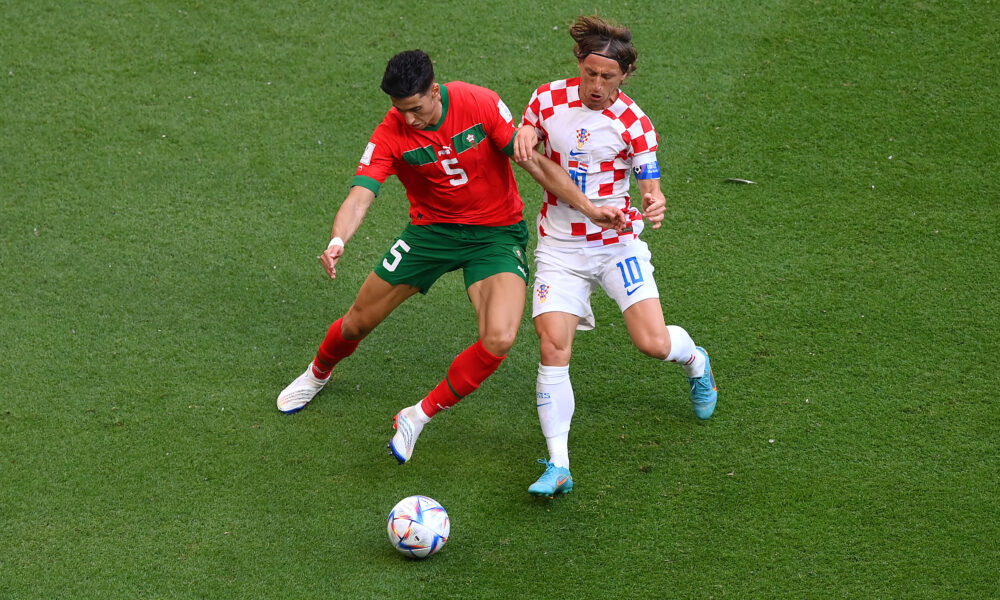 Croatia were held to a frustrating draw in their FIFA World Cup opener for the first time, as a lacklustre encounter with Morocco ended in a goalless stalemate.

Croatia stunned the world by finishing runners-up in the last edition, and with a new-look side featuring only four starters from the 2018 final, there was plenty of optimism that they could once again challenge the world’s elite.

The Vrateni imposed themselves in the tie early on, with Ivan Perišić leading the charge. The Tottenham Hotspur man sent in a long-range dipping shot, but it flew just inches over the crossbar.

However, after Perisic’s effort, the Croats struggled to gain momentum as the Moroccans reacted with an effective pressing pattern that stopped Croatia from creating any clear-cut chances.

The only shot on target before the break came in added time, as Nikola Vlašić met Borna Sosa’s low cross, only to be denied by Yassine Bounou from inside six yards.

Morocco offered little by way of attacking endeavour, but they did well to limit Croatia to half chances. However, in the second half, they burst into life.

Looking to claim their first World Cup victory since 1998, they came agonisingly close to snatching a shock lead through Sofiane Boufal.

The Angers forward’s penalty shout was waived away despite his shot seemingly striking the arm of Dejan Lovren before Achraf Hakimi drew a save from Dominik Livaković with a wicked curling free-kick.

Ultimately, neither side were able to break the deadlock, and the game fizzled out, leaving both teams to settle for a share of the spoils.

Morocco are still yet to concede under Walid Regragui three months into his reign, while Croatia failed to win their opening World Cup game for the first time. Morocco will trade tackles next with Belgium, while Croatia has a date with Canada. 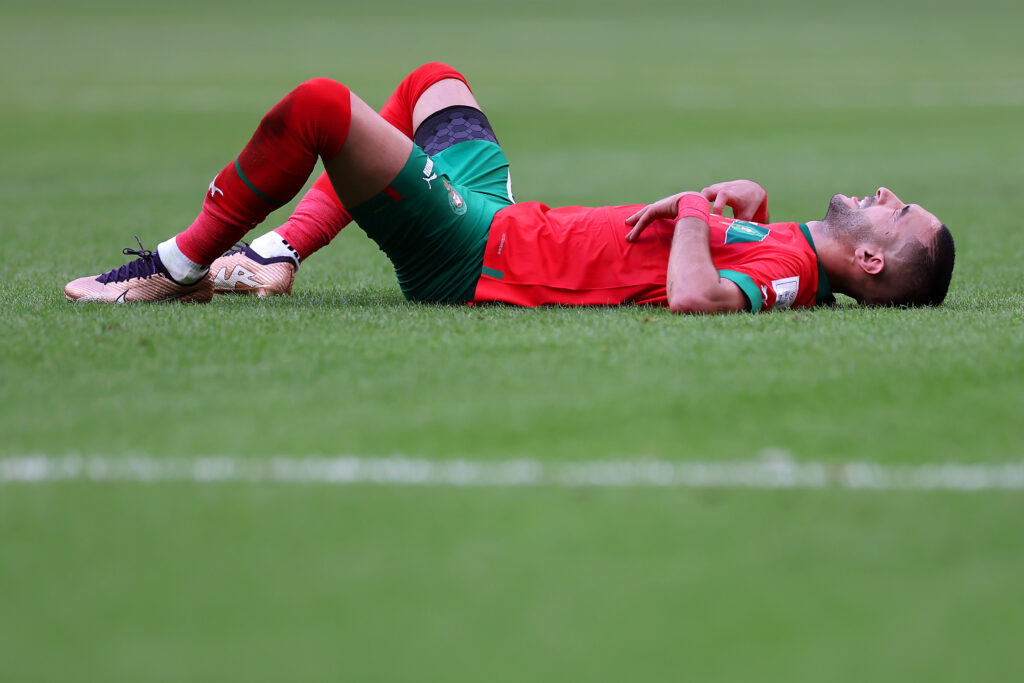 Bono (7/10) – Was determined to keep a clean sheet and got it. Made two really good saves to deny Vlasic and Modric and did well claiming crosses.

Achraf Hakimi (6/10) – Came close with a wicked free-kick but did not contribute much more going forward. He was also solid defensively.

Nayef Aguerd (5/10) – Had a decent performance and played his part in the team’s clean sheet.

Noussair Mazraoui (6/10) – Defended well and got into some good attacking positions before going off injured. The Moroccans will be hoping it is nothing serious.

Azzedine Ounahi (6/10) – Bossed the midfield by winning most of his duels. Also caught the eye with his passes.

Sofyan Amrabat (7/10) – Ran the show at the heart of the midfield and capped an impressive performance with an important clearance.

Selim Amallah (5/10) – Did his part in winning possession but was not effective in possession.

Hakim Ziyech (6/10) – Started the game well by putting in some dangerous crosses, but was ineffective in the second half.

Youssef En-Nesyri (5/10) – Did fairly well in the air against the Croatia centre-backs but did not do much else.

Sofiane Boufal (4/10) – Was merely a passenger on the pitch and did not affect the game much. 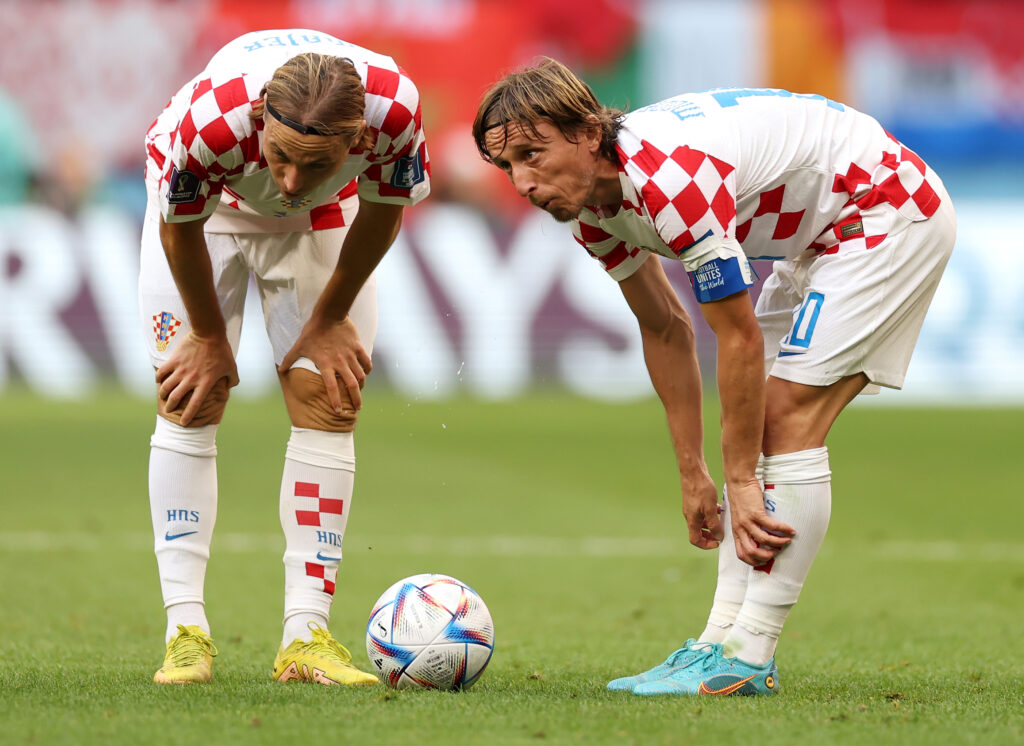 Dominik Livakovic (6/10) – Made his presence known with two good saves.

Josip Juranovic (5/10) – Was solid defensively but offered next to nothing going forward.

Josko Gvardiol (7/10) – Was defensively solid and comfortable in possession.

Borna Sosa (6/10) – Created the biggest chance of the game with an inviting cross but was quiet after that.

Luka Modric (5/10) – A poor performance by his standards. Missed a big chance and failed to retain the ball in the middle of the park.

Marcelo Brozovic (6/10) – Covered for Modric well and protected his backline.

Nikola Vlasic (4/10) – Struggled to get involved in the first half and missed a big chance.

Andrej Kramaric (4/10) – Failed to make any impact. Did not even have a shot on target.

Ivan Perisic (5/10) – Came close with a good effort and worked hard, but should have offered more in attack.

DOHA — Neymar returned from injury to help inspire Brazil to a 4-1 victory over South Korea on Monday (Dec 5) as the favourites cruised through to the quarter-finals of the World Cup. Richarlison's brilliant goal made it 3-0 and Lucas Paqueta added another before half-time to leave South Korea shellshocked. Paik Seung-ho pulled one back but by then Brazil were thinking about Friday's quarter-final clash with 2018 runners-up Croatia. It was a chastening experience for Son Heung-min and South Korea, who have still never won a World Cup knockout match outside their own country. Tite made 10 changes to the Brazil team after rotating his squad for last Friday's inconsequential 1-0 loss to Cameroon, with Danilo also returning from injury at left-back.

The Portuguese superstar has been offered an enormous salary (Picture: Getty)Piers Morgan has again rubbished speculation that Cristiano Ronaldo has agreed a record-breaking deal to join Saudi Arabian club Al-Nassr. Reports emerged last week that the Portuguese superstar had received a contract offer worth €500million (£432m), with Marca claiming on Monday that Ronaldo has now agreed to the terms and will join Al-Nassr on January 1. However, Morgan – who is in frequent contact with Ronaldo after their explosive interview – insists the reports are wide of the mark. But they continue to repeat that nobody wants Cristiano. How they don’t want a player who scored 32 goals last year, with national team [included]?’MORE : Cristiano Ronaldo still open to Chelsea approach after £432m offer from Al-NassrMORE : ‘I told him to shut up’ – Cristiano Ronaldo on spat during Portugal loss to South KoreaFor more stories like this, check our sport page.

Bob McGrath, who delighted “Sesame Street” viewers in the role of Bob Johnson for 47 seasons, has died at the age of 90. "Sesame Street" hosts Matt Robinson (Gordon), Will Lee (Mr. Hooper) Loretta Long (Susan) and Bob McGrath (Bob) stand with Big Bird in a promotional still on the set of the educational public television series, circa 1969. DJ, filmmaker and co-founder of The Roots Questlove tweeted, “Bob McGrath. His work on on Sesame Street showed me that a grownup man could be gentle and kind. Thanks Bob.”And Holly Robinson Peete, daughter of another “Sesame Street” original cast member, Matt Robinson, who played Gordon Robinson during the show’s early years, tweeted, "My heart is broken that we’ve lost Bob McGrath💔…Rest In Peace, Bob!

DUBAI :Iranian shops shut their doors in several cities on Monday, following calls for a three-day nationwide general strike from protesters seeking the fall of clerical rulers, with the head of the judiciary blaming "rioters" for threatening shopkeepers. Amini was arrested by Iran's morality police for flouting the strict hijab policy, which requires women to dress modestly and wear headscarfs. Iran's public prosecutor on Saturday was cited by the semi-official Iranian Labour News Agency as saying that the morality police had been disbanded. Security forces would show no mercy towards "rioters, thugs, terrorists", the semi-official Tasnim news agency quoted the guards as saying. Kurdish Iranian rights group Hengaw also reported that 19 cities had joined the general strike movement in western Iran, where most of the country's Kurdish population live.

49ers' push for Super Bowl takes serious blow with Jimmy Garoppolo out for season | OpinionThe San Francisco 49ers’ push for a Super Bowl has taken a serious blow. 49ers quarterback Jimmy Garoppolo suffered a broken left foot and will miss the rest of the season, coach Kyle Shanahan said after a 33-17 victory over the Miami Dolphins on Sunday. MEET QB3: Brock Purdy, the San Francisco 49ers rookie and Mr. Garoppolo’s injury, however, will affect how the rest of the 49ers’ season unfolds. He was instrumental in helping San Francisco take the lead in their division and reach the No.

M. orocco vs Croatia - LIVE! Croatia, runners-up at the last World Cup, were held to a 0-0 draw by Morocco at the Al Bayt Stadium this morning

Morocco held 2018 finalists Croatia to a 0-0 draw in Wednesday's first game; The Croats had the better of the chances, with Dejan Lovren

Highlights and analysis of Morocco and Croatia's scoreless draw in

Morocco vs Croatia Live Score: Match ends in 0-0 draw. A late free kick for Croatia but Morocco manages to clear it.

Liverpool 3 - 0 Brentford - The Player Ratings - By Steven Smith for AnfieldIndex.com.