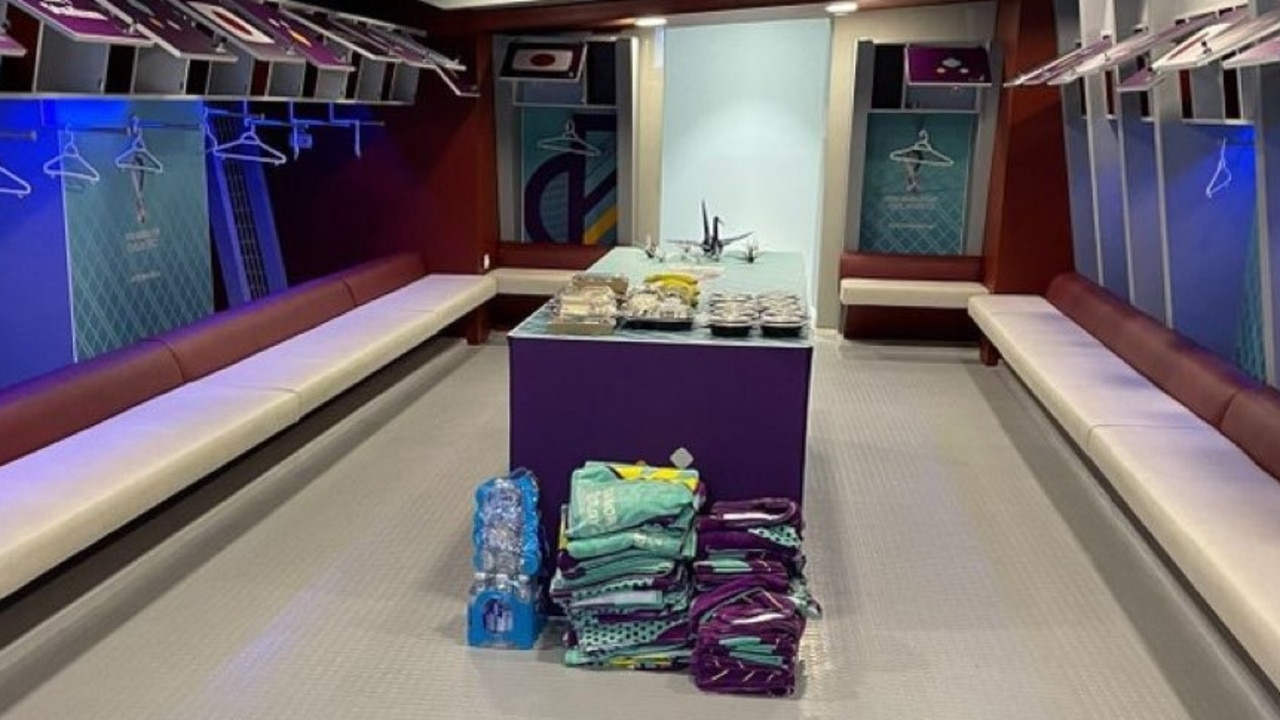 Japan have quickly become a fan favourite at the 2022 Qatar World Cup and it has nothing to do with their play on the pitch.

The Asian powerhouse pulled off the stunning upset victory on Thursday morning when they toppled Germany 2-1 in their opening group stage encounter.

The stunning win landed Japan a host of new fans, but it was what they did after the game that melted hearts.

Japanese fans won the world over after the opening game of the World Cup between Qatar and Ecuador.

Videos uploaded to social media showed fans staying behind long after the match had ended, walking around the stadium cleaning up.

Their classy act was captured on video by Bahraini influencer Omar Al-Farooq, who shared the clip with his 2.6 million followers on Instagram. It has been watched more than 7 million times.

After pulling off the upset victory, an image of the Japanese changerooms was uploaded to social media showing the room in a spotless condition.

The entire room was neat and tidy with everything packed up perfectly on the table in the middle of the room.

But if that wasn’t enough, they also left behind 10 origami cranes with a sign on the table reportedly says “thanks”. The dressing room was immaculate.

It’s not the first time the nation have left the dressing room in a spotless state at a World Cup. During the 2018 World Cup in Russia, after being knocked out by Belgium the team left the room in perfect condition and left a “thank you” note in Russian on the table.

After the Asian Cup in 2019 the team tidied everything up and left a similar note, this time on the whiteboard, in English, Arabic and Japanese saying thank you.

Germany came to Qatar under huge pressure to avoid the disaster of 2018, when they failed to make it out of the group stage in Russia as World Cup holders.

Hansi Flick’s side took the lead through a first-half penalty from Ilkay Gundogan and should have been out of sight after creating a host of chances.

But Japan hung on and equalised through substitute Ritsu Doan in the 75th minute.

To add to the storyline, both Doan and Asano play in the German Bundesliga. “The players came together as one team, we prepared well and we stuck in there, and that’s what led to the win,” said Japan manager Hajime Moriyasu.

“Lots of our fans have come to Doha and they were behind us pushing us on. I want us to keep a level head after this and look at what we could have done better and look to win the next match.” Germany’s World Cup future is now once again on the line, with games to come in Group E against Spain and Costa Rica.

“We made it too easy for Japan. I don’t know if an easier goal has ever been scored at a World Cup,” Gundogan told Germany’s ARD TV network.

“This must not happen to us.” Thomas Mueller told Germany’s Magenta TV it was “ludicrous that we are now standing here with a defeat.” Japan meanwhile are eyeing a place in the knockout round after a dramatic comeback that scarcely looked possible at halftime.

That's the big question being asked about Ronaldo after he was dropped by Portugal coach Fernando Santos for the 6-1 win over Switzerland in the round of 16 on Tuesday. One inevitable question Santos faced was about reports in national media that Ronaldo threatened to leave the World Cup after being told he was benched. "He has never told me that he wanted to leave the national team," Santos said through an interpreter. The excitement extended to the Moroccan diaspora of around 5 million people spread mostly around Europe, which has united behind the World Cup run of the team nicknamed the "Atlas Lions." Even if he is among the substitutes again, Ronaldo — playing in what is likely his last World Cup — is expected to see some time on the field.

That's all it takes to win the World Cup. Get yourself the best deal in soccer and subscribe now to ensure you receive daily updates about the World Cup. Your World Cup schedule:Remember, when the World Cup ends and Champions League resumes, you'll be able to catch all the action on Paramount+. If you'd like to read more about Brazil's attack, Morocco's defense, and, of course, Messi and Mbappe, make sure to check out the complete list of our quarterfinals players to watch. You can get the entire World Cup Power Rankings list here, and you definitely should.

Good morning to everyone but especially to...BAKER MAYFIELD AND THE LOS ANGELES RAMSOn Tuesday, one team in the entire NFL wanted Baker Mayfield. Mayfield took over on the second possession and never looked back. Many quarterbacks on new teams need months to make things function; it took Mayfield hours. World Cup returns today with Croatia-Brazil, Netherlands-Argentina ⚽Getty ImagesAfter a two-day break, the World Cup is back with quarterfinal matches today and tomorrow. All four matches promise plenty of intrigue -- as any World Cup quarterfinal round should -- and today's contests should be terrific.

Published 12/09/2022, 8:30 AM ESTDustin Poirier left his fans worried with images of his swollen left foot on the internet. However, the UFC lightweight fighter declared that he would start charging the fans for his foot pics. Nonetheless, fans were happy when the American fighter shared he was recovering well. ABU DHABI, UNITED ARAB EMIRATES – JANUARY 23: Dustin Poirier arrives prior to his fight during the UFC 257 event inside Etihad Arena on UFC Fight Island on January 23, 2021 in Abu Dhabi, United Arab Emirates. Conor McGregor vs. Dustin Poirier Face-Off Gets Ugly!

The Midshipmen are 2.5-point favorites in the latest Navy vs. Army odds, while the over/under for total points scored is 32.5. Before locking in any Army vs. Navy picks or college football predictions, make sure you see what SportsLine expert Adam Silverstein has to say. Now, Silverstein has locked in on Navy vs. Army from every angle and released a confident against-the-spread pick. He's sharing what it is, and which side of the Navy vs. Army spread he's backing, only at SportsLine. So who wins Saturday's 2022 Army vs. Navy matchup?

We’re in Week 14 of the NFL season, and only the Bears and Texans have been eliminated from playoff contention. Games of the weekThe Jets upset Allen and the Bills in Week 9 and go for the sweep of the season series on Sunday. Which team most needs a win in Week 14? That leaves a five-win team two games out of the last spot in the NFC, so Detroit is my sleeper. Grab the points, root, root, root for the home team and don’t be surprised when the Chargers win outright.

Japan pulled of a stunning upset victory against Germany as two late How to watch Germany vs Japan live, stream link and start time.

Japan pulled of a stunning upset victory against Germany as two late How to watch Germany vs Japan live, stream link and start time.

It was the first competitive meeting between Japan and Germany, soccer fans erupt in celebration after World Cup upset over Germany.

Japan supporters celebrated a shock 2-1 victory over Germany in from a goal down to overturn the former champions, the Samurai Blue fans

Japan pulls a shocking 2-1 upset over Germany at the 2022 FIFA World Cup a day after Saudi Arabia surprised Argentina.

The Japanese public rejoiced Thursday after Japan claimed a dramatic comeback win over Germany at the soccer World Cup in Qatar,

The match, in which Japan scored a stunning 2-1 upset over four-times champions Germany, took place at 2 p.m. local time in Germany, when many

The Japanese public rejoiced early Thursday after Japan claimed a dramatic victory over Germany at the soccer World Cup in Qatar,