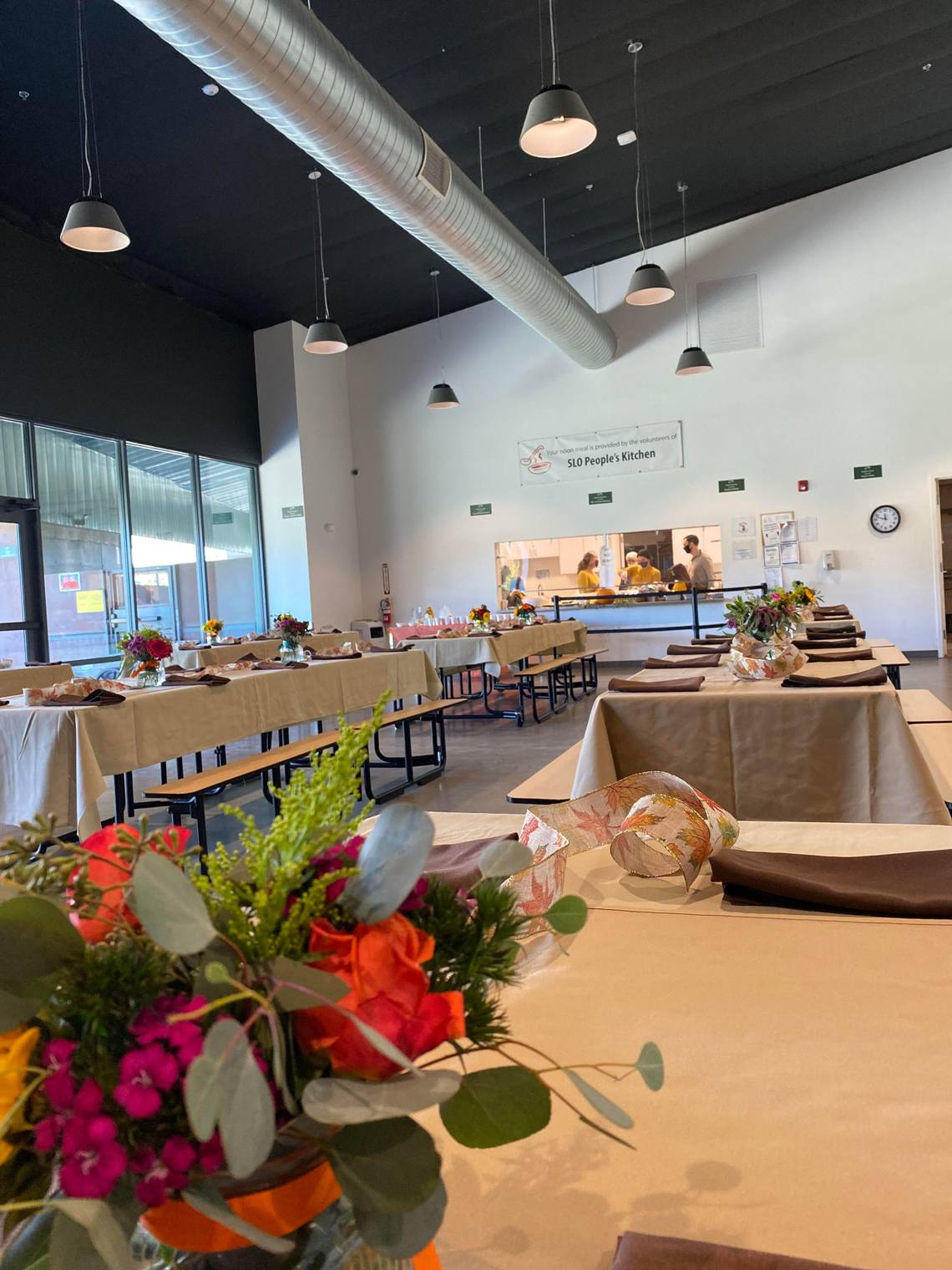 This Thursday, one group of San Luis Obispo County volunteers will spend their morning giving more than 100 people something to be thankful for.

For the past few years, People’s Kitchen has worked with the Community Action Partnership of San Luis Obispo (CAPSLO) and 40 Prado Homeless Services Center to deliver these hot meals every day at lunch, including during the COVID-19 pandemic, Parker said.

Each year, one of those 364 meals stands out from the rest: Thanksgiving.

“Nothing speaks like food,” Parker said of the service the People’s Kitchen provides.

What’s on the menu for Thanksgiving 2022?

On an average day, Parker said she and a handful of volunteers at 40 Prado will serve between 70 and 90 meals at their daily noon lunch.

On Thanksgiving, though, that number is projected to be closer to 120 meals, and for good reason. 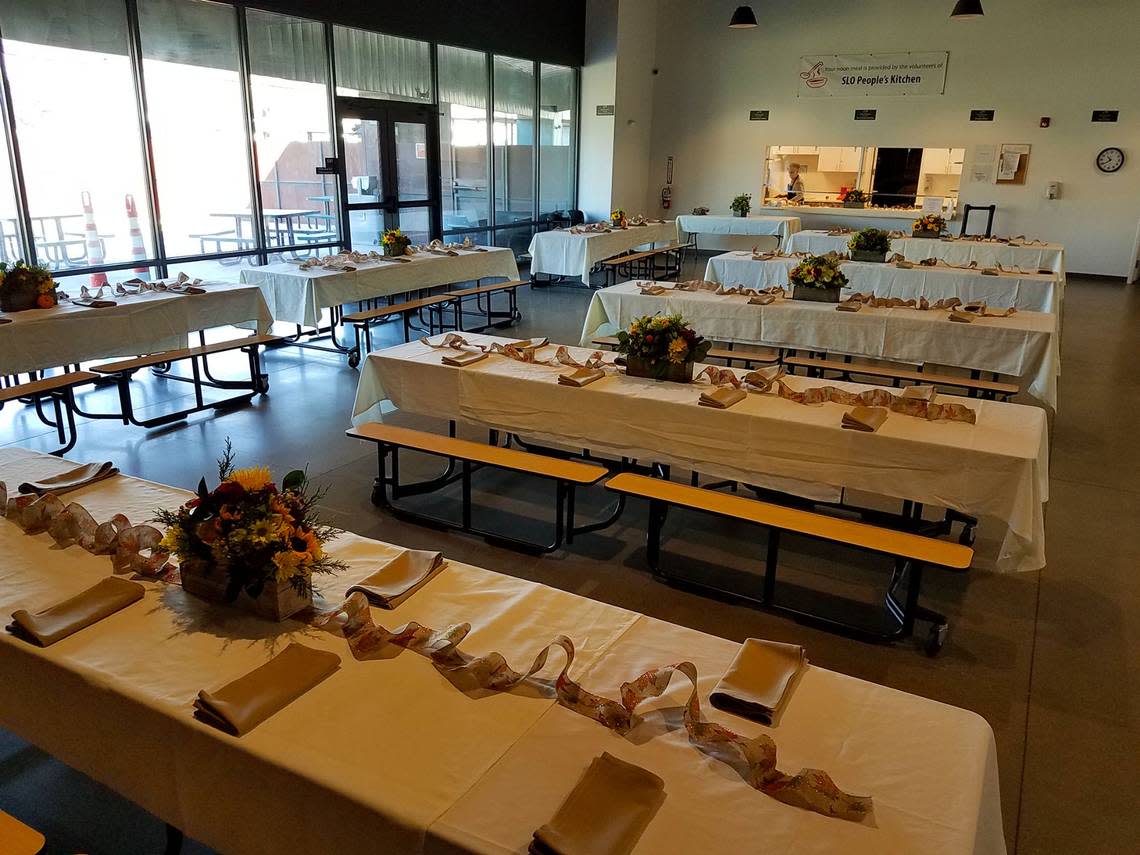 Tables in the 40 Prado Homeless Shelter dining hall are decorated with a Thanksgiving spread by the People’s Kitchen of San Luis Obispo in 2021. The volunteer organization serves clients at 40 Prado 364 days a year. The only exception is Christmas Day.

Oftentimes, Parker said the People’s Kitchen will see a spike in volunteers during the holiday season, but those efforts are better used at other times of the year.

“Everybody starts coming out of the woodwork Nov. 1 to Jan. 1, and right now, we’re pretty filled up,” Parker said. “I mean, we don’t have a lot of opportunities, but people are hungry in July, and people kind of forget that.”

The People’s Kitchen is entirely run by volunteers, Parker said, ever since its inception in 1983 and incorporation as a nonprofit in 1984.

Since then, the nonprofit has also enlisted the help of local businesses and restaurants to supply the funding and resources to provide hot meals each day.

For example, this year the cornbread served in the Thanksgiving meal will be donated by SLO’s Bon Temps Creole Cafe, Parker said.

“I laugh, but the way you get off this board is you die,” Parker said. “We don’t accept retirements. It’s a commitment — you die or you move.” 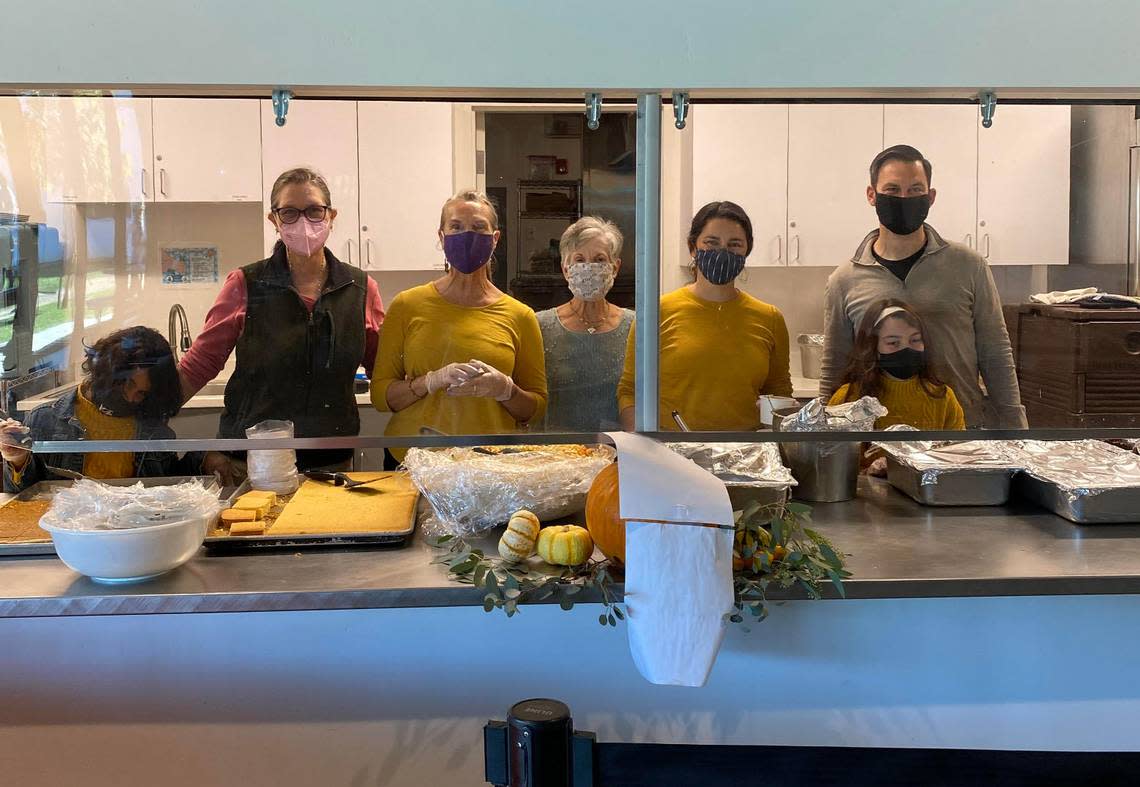 Volunteers for the People’s Kitchen of San Luis Obispo prepare to welcome clients to their 2021 Thanksgiving meal at 40 Prado Homeless Shelter. The organization has been providing free lunches for nearly four decades.

For clients of the shelter, the meal brings a sense of normalcy during an uncertain period, 40 Prado employee and former client Christopher Brogdon Sr. said.

Brogdon was a client at 40 Prado for around five months four years ago, during which he was a guest at People’s Kitchen’s Thanksgiving meal.

“I wasn’t able to get to my family (when I was homeless),” Brogdon said. “Having seven kids, it was hard to get back and forth, so it was good to have Thanksgiving, and it was amazing.”

The festive touches and daily service made Brogdon appreciate the work the People’s Kitchen volunteers do, he said.

A current 40 Prado client, who only identified herself as “Lisa” for privacy reasons, said she was grateful the volunteers were there to provide a sense of home through the Thanksgiving meal.

“It’s huge for everyone here,” Lisa said. “Even Halloween was special — they got pumpkins, and you feel like you’re in the spirit of things, you know what I mean?”

Lisa said on a daily basis, people don’t realize how much distress food insecurity can cause for unhoused people.

Most unhoused people, she said, miss cooking and enjoying home-cooked meals more than most other comforts of having a home. 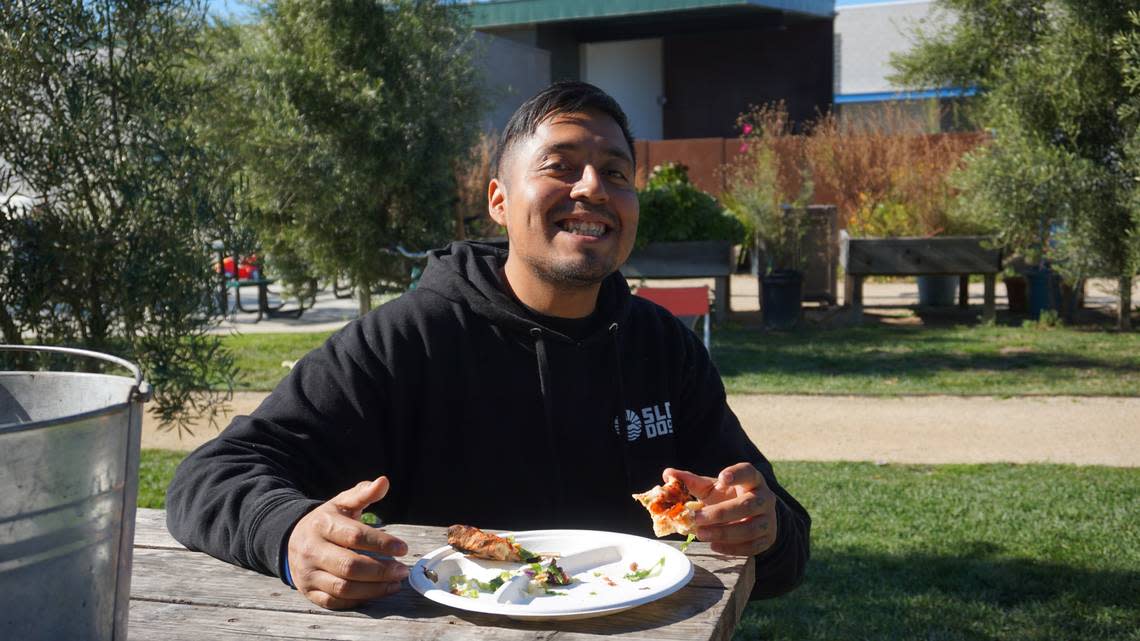 Fabian Tolan, 26, enjoys a lunch made by the People’s Kitchen of San Luis Obispo at 40 Prado Homeless Shelter. Tolan said he appreciates the meals, which are given to 40 Prado clients every day at noon 364 days a year.

Another current 40 Prado client, 26-year-old Fabian Tolan, said this year’s meal represents an opportunity to experience something he has had few opportunities to try: a family meal.

Tolan left the foster care system at 18, and with few options, he turned to 40 Prado eventually to find food, and in turn, became a daily beneficiary of the People’s Kitchen’s lunches.

“Honestly, (the People’s Kitchen) deserve like a grant or something like that,” Tolan said. “The state needs to step in and give them a grant, because what they’re doing is essential to us.”

The People’s Kitchen’s impact goes beyond the meals, Tolan said.

“They’re always here, they help out and they have a smile on their faces, and it makes us feel a lot more appreciative, too,” Tolan said. “At times it can feel kind of overwhelming — you’re in line, you’re trying to get food, (and) you kind of feel like a burden. They really do take that feeling away.”

“As someone who doesn’t have any family, who doesn’t really know what that feels like?” Tolan said. “Sounds awesome.” 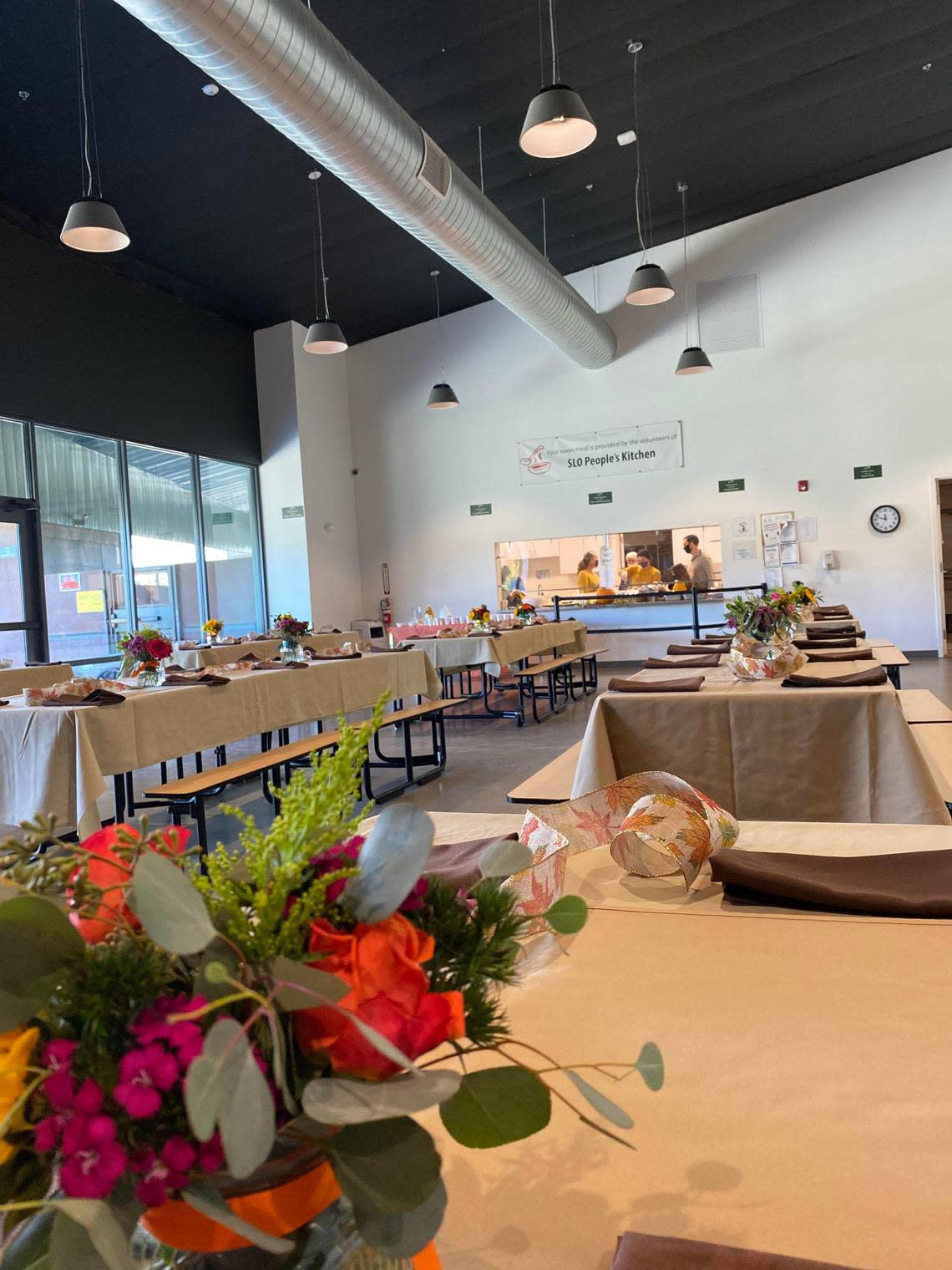 Tables in the 40 Prado Homeless Shelter dining hall are decorated with a Thanksgiving spready by the People’s Kitchen of San Luis Obispo in 2021. The volunteer organizations serves guests at 40 Prado 364 days a year, except for Christmas.
Continue reading...

The ADHD medication shortage is getting worse. There's no easy solution, experts say.

As the nationwide Adderall shortage enters its fifth month, people who rely on medication to help manage attention-deficit/hyperactivity disorder are finding few, if any, available alternatives. There’s no sign of relief yet, and no easy solution to the problem, pharmacy experts say. When will Adderall shortage end? The advocacy branch of ASHP has also been pushing the government to improve how it addresses issues in drug supply and demand. From Ganio’s perspective, addressing the ADHD drug shortage is going to require much more transparency from drug companies and better, coordinated systems for forecasting drug demand.

Vanessa Feltz ‘disappointed and shocked’ after ending 16-year relationship with Ben Ofoedu: ‘Once the trust is gone, it can never be repaired’

Vanessa Feltz has told her followers that her relationship with her long-term partner is now “over”. “I honestly didn’t now what to say to you on Instagram,” Feltz, 60, said in the emotional clip. She told the newspaper: “As an agony aunt, I have said many times that once the trust in a relationship is gone, it can never be repaired or regained. Ben Ofoedu and Vanessa Feltz attend the Pride Of Britain Awards 2021 at The Grosvenor House Hotel on October 30, 2021 (Gareth Cattermole/Getty Images)“Who knew I’d be single at 60? Earlier this year, Feltz opened up about dealing with the age gap between her and Ofoedu and told The Sunday Times: “Don’t let anyone tell you the age gap doesn’t matter.

A close friend of missing 45-year-old Nicola Bulley has shared a plea online in an attempt to dispel misinformation about the case. “That fact that I’ve had to write this is disgusting.”According to Ms Ann, Ms Bulley is an “incredibly strong swimmer” and both she and Mr Ansell complete this walk regularly. However, close friend Emma White has dismissed suggestions the mother-of-two would have been carrying a tennis ball in the first place. Paul Ansell and Nicola Bulley mostly work from home, which is why he was there that day2. Ms Bulley drove to the school to drop her two daughters off, left her car there and walked to the river9.

As a player at Duke, Scheyer experienced four years worth of games against UNC. Now, though, it was different: his first UNC game as a head coach. After time expired here, sending those same students who’d listened to Scheyer on Friday into a sweaty throng of delirium on Saturday, Scheyer took a victory lap. North Carolina head coach Hubert Davis greets Duke head coach Jon Scheyer before Duke’s game against UNC at Cameron Indoor Stadium in Durham, N.C., Saturday, Feb. 4, 2023. “For me and coach Scheyer, we go back with this two years,” said Roach, an elder statesman compared to most of his teammates on a freshmen-laden team.

Wales host Ireland in a mouthwatering 2023 Six Nations opener in Cardiff this afternoon. This season’s tournament should be no exception, with England, Ireland and Wales possibly leading the way. If rugby union’s world rankings provide an accurate form guide, then this season’s Six Nations is a two-horse race between Ireland and France. Six Nations is rugby’s chance to sidestep issues and showcase excitementSix Nations 2023: Wales vs Ireland12:21 , Jack RathbornWelcome to Independent Sport’s Six Nations 2023 coverage. We’ll have build-up to Wales vs Ireland in Cardiff, plus we’ll have you covered for England vs Scotland at Twickenham later this afternoon.

HELL'S KITCHEN, Manhattan (WABC) -- At least 100 people were evacuated after an underground homeless encampment in Hell's Kitchen caught on

Open on Thanksgiving: 12 restaurants that will serve turkey dinners

homelessness can be found in the 2020 OECD Policy Brief, “Better data Although the homeless are a small share of the population in most

LAPD cracks down on use of homeless people for ballot initiative

When ballot petition circulators offered $1 for forged signatures, homeless and poor people on skid row waited in line to sign up,

Nando's in Glasgow to open on Christmas Day to feed homeless

The Nando's branch in Glasgow city centre will stay open on Christmas Day to serve homeless people for free. The restaurant made the

About six in 10 Californians said the homeless population has grown in their described the issue as the most important facing the state,

Kanye 'Ye' West aims to help the homeless population in Los Angeles and meets with city leaders to establish plan.