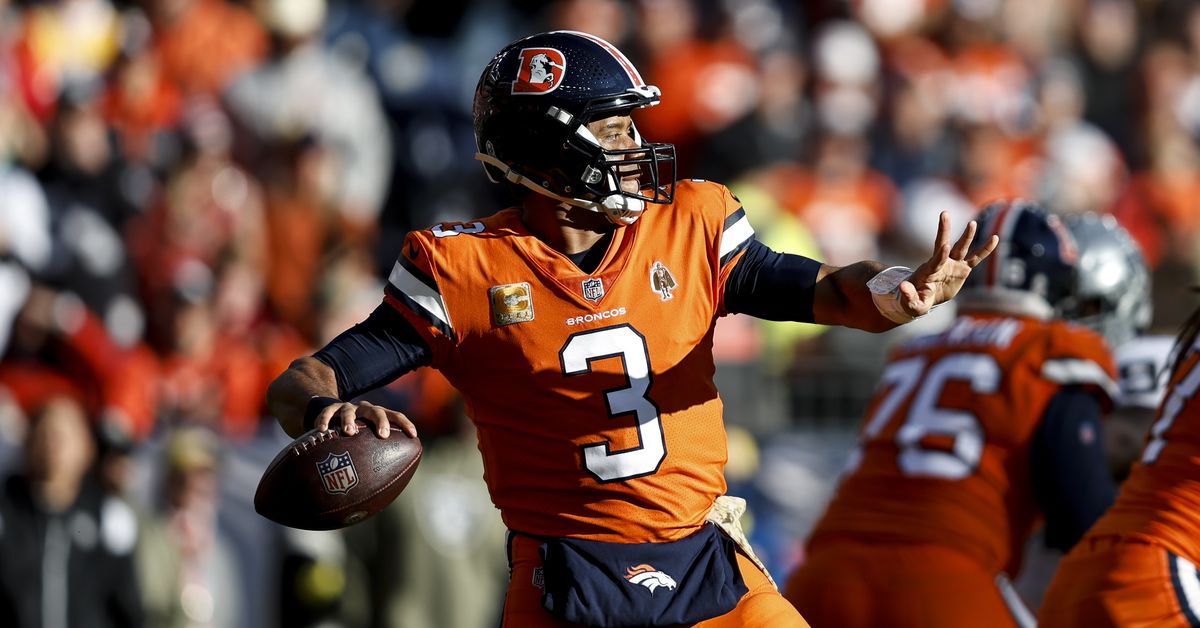 Happy Thanksgiving, everybody. Nothing says the holidays like talking to somebody who you hope is sad on Sunday or avoiding talking to that person while reading about football on your phone. In honor of those traditions, we’re publishing our weekly 5 questions with the enemy series a day early.

This week I spoke with Ian St Clair of the Mile High Report about Klint Kubiak assuming the Broncos offensive play calling duties, Denver’s weakness against the run, and their plans at running back after a big week of turnover for them. There’s even a peek at the line for this week’s game and an attempt to make sense of two teams that Vegas just can’t seem to make sense of twelve weeks into the season. Read to get the inside scoop on this week’s Carolina Panthers vs Denver Broncos match up. Just leave before the end of the last answer to protect yourself from the gratuitous reference to That Game.

The biggest story out of Denver right now seems to be head coach Nathaniel Hackett surrendering play-calling duties to offensive coordinator Klint Kubiak. Y’all went so far as to report scoring 16 points in a loss to the Las Vegas Raiders last week as an offensive improvement. What is different between Hackett and Kubiak’s styles and how do you expect that to develop in Kubiak’s second week calling plays?

The fact 16 points is considered an improvement tells you all you need to know about the offensive Broncos offense. The main difference is Hackett isn’t the one calling the plays. He already needed help with game and clock management, which hasn’t really improved that much, and now he has given up play-calling. Seeing the theme here? Whatever Hackett is involved in, it doesn’t go well. To steal a line from “Office Space,” “What do you say ya do here?” In all seriousness, the offense was more efficient and would have scored more points had Melvin Gordon not done what he does best — fumble inside the 5-yard line. However, the offense still cannot do anything after halftime or make adjustments. We’ll see how the second attempt goes on Sunday, but the bar isn’t exactly high.

The second biggest story, obviously, is that the University of Wisconsin’s own Russell Wilson has been a below-average quarterback this season. Is this another Hackett problem that will improve with time away from the head coach’s more granular management on game day or did the former Badger leave all of his magic in Seattle?

Wilson and Kubiak proved it’s not Wilson. This is all Hackett, and the sooner the Broncos rid themselves of this horrible mistake, the better. The comparison I’ve made all season is oil and vinegar. No matter how hard you try to shake it up and get these two to mesh, it will never happen. The other factor is injuries. The loss of Tim Patrick and Javonte Williams has been massive to this offense. Not to mention the offensive line. Broncos GM George Paton needs to address the offensive line in the offseason after he fires Hackett and gets a head coach/offensive coordinator into the building.

The Broncos have a top-flight defense. They are maintaining a top-3 ranking in numerous categories in spite of their offensive failings week after week. Panthers fans understand how hard it is for a good defense to hold up against both their own and an opposing offense. Respect. That said, nobody has any game tape on Sam Darnold in a Ben McAdoo offense. I assume that would strike Mahomesian levels of fear in any NFL player. How do you expect the Broncos to respond to the daunting task of being the first NFL team to face the Darnold-McAdoo dream team?

The expectation is D’Onta Foreman will go off. There’s no question the Broncos defense is elite and one of the best in the NFL. But this defense struggles mightily to stop the run. Just look at what Josh Jacobs did on Sunday. Denver could stop the best running back in the NFL in Derrick Henry and then turn around and make Jacobs look like Bo Jackson from Tecmo Bowl. The key for the Broncos is creating pressure and turnovers. When Darnold does throw the ball, they hit him, keep him in the pocket and get one or two interceptions.

With Chase Edmonds to injured reserve and Melvin Gordon to the waiver wire, what’s next for the Broncos running game?

A sigh of relief. Seriously, anytime Gordon touched the football, everyone held their breath. Now whoever Hackett or Kubiak calls on, the fans and the offense know the ball won’t hit the ground. Anything else is gravy. My guess is Latavius Murray is the lead back now.

With the Broncos favored on a -2 point spread against the Panthers this week, it looks like Draftkings Sportsbook and the rest of the oddsmakers have absolutely no idea what to do with the Panthers again. Both teams are objectively bad at playing regularly competitive football and neither team is particularly predictable in how they are going to be bad in a given game. What is your best guess for what happens in this game?

Both offenses will look inept. Both defenses will play their asses off. Hackett will make a decision that costs his team. And the under will hit once again. The total currently sits at 35, one of the lowest of the season. That’s still too high. In Broncos games this season, the under is 9-1. That will hit again on Sunday in a Panthers 13-9 win. At least Gordon won’t fumble again. Given all of that, I may just rewatch Super Bowl 50, since that’s the last time the Broncos were any good.

What next for Steve Wilks after Carolina Panthers appoint Frank Reich?

Are the Carolina Panthers right to swerve Jim Harbaugh’s interest?

Are the Carolina Panthers and team owner David Tepper right to reportedly swerve Jim Harbaugh’s interest in the vacant head coaching position? Now that the Carolina Panthers’ 2022 engagements are in the rearview mirror, speculation is gathering pace about their offseason plans. Carolina Panthers not planning to hire Jim Harbaugh as head coachMuch of the talk over recent days has centered on Jim Harbaugh‘s conversation with Tepper. “Reports out of Minnesota about Harbaugh’s interview last year with the Vikings made Tepper wary, sources say. While many fans would welcome Harbaugh’s arrival in Carolina, Tepper’s opinion is the only one that matters.

The Jaguars defeated the Tennessee Titans by a final score of 20-16, winning the division and earning a playoff spot. On the kickoff following Tennessee’s touchdown, Agnew set Jacksonville up nicely, returning the ball 54 yards up to the 50-yard line. The Jaguars trimmed Tennessee’s lead to just three points at 10-7 with 2:36 remaining before halftime. Later in the final quarter, the Titans took the ball over with 8:06 left to play and the lead. Improbably, the Jaguars took a 20-16 lead with 2:51 remaining on the clock.

Your guide to outside

makes [Boots] exciting.” Their Instagram handle is @boots.party and their next event is December 31 at Goose Island. Open mikesFruit SaladOrganizers: Rain Thomas and Whitney LaMoraPhoto by Margo SantiagoFruit salad is a monthly open mike that centers Chicago’s LGBTQ community. At their most recent open mike, 120 tickets sold out within 15 minutes of being released. Mann created the open mike for people from the south or west sides of Chicago who didn’t want to always travel north for open mikes. Open mike attendees who purchase a VIP ticket get a guaranteed seat and meal.

That isn’t great in Week 14, but all but the silliest hopes of playoff contention have long since sailed. Their choice, after a convincing win against a hapless Denver Broncos team last week, is clear. The Seattle Seahawks are an interesting opponent for their Week 14 game. Pete Carroll’s squad is neither the best nor the worst team the Panthers will have faced this year. A close spreadOur friends over at Draftkings Sportsbook have the Panthers are four-point road underdogs to the Seattle Seahawks.

The Denver Broncos open 2.5-point favorites on the road against the Carolina Panthers with an over/under at 36.5.

Predictions and betting preview for the Denver Broncos vs Carolina Panthers NFL Week 12 Game on November 27, 2022, from JefeBet.

Broncos vs Ravens 5 questions: Will Lamar Jackson and Baltimore claim the AFC North? To preview Sunday's game, we go “behind enemy lines” to

The Mile High Report staff believes the Denver Broncos are in for a tough home game against the San Francisco 49ers in Week 3.