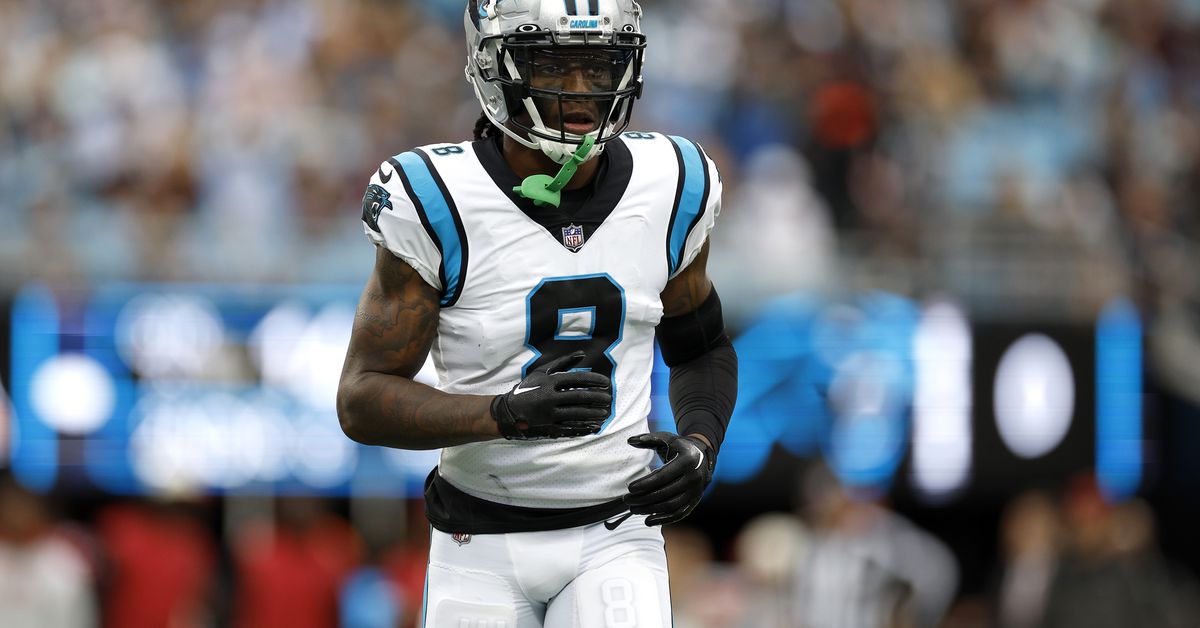 The Carolina Panthers debuted their new, black helmets on top of an all-black uniform in their sole prime time game of the 2022 NFL season. The sleek combo fueled a surprisingly dominant performance on the ground and, ultimately, a big Panthers win.

The first quarter was comprised of most of four possessions. The Falcons punted, the Panthers drove for a field goal doink that was good, the Falcons punted, and the Panthers ran out the clock on the first quarter with the first four plays of a 15-play drive that ultimately ended in a punt halfway through the second quarter. They were penalized and then sacked out of field goal range.

The Panthers extended their lead to 10-0 following an actually effective screen play, officially recorded as a run, to Laviska Shenault Jr. The drive started it in plus territory for the Panthers following a Bradley Pinion shanked punt from the Falcons. The next Falcons possession following that score ended when Jaycee Horn picked off Marcus Mariota on third down and returned the ball to the Falcons side of the field.

That led to a 59-yard field goal off the boot of Eddy Piñeiro to take a 13-0 lead. The Falcons responded with a field goal drive of their own, electing to kick a 32-yard attempt on 3rd and 3 with 0:03 left on the clock. Improbably, things were looking up for the Panthers at the half.

The third quarter was a tale of penalties against both teams. Weather, overzealous refs, and a light lack of discipline all combined for a slow paced Falcons possession that resulted in a Drake London touchdown reception to bring Atlanta to within three points of the Panthers. Welp, or within four points as Younghoe Koo shanked the extra point. Panthers still had the lead half way through the third quarter, 13-9.

Carolina built on their lead thanks to a D’Onta Foreman touchdown run, at which point Piñeiro returned the favor to the Falcons and missed an extra point of his own. The Panthers led 19-9 at the end of the third quarter.

I’ll be honest, I didn’t expect to spend 300 words of this recap strictly describing the back and forth scoring updates.

A quick punt from the Falcons to open the fourth quarter led to a nearly 6:00 field goal drive from the Panthers to put the score up to 22-9. It is worth noting that the Panthers have punted on only three of their right possessions. The other five have all been scoring drives. They would need more touchdowns to win against actual NFL teams, but this has been downright dominant play against an NFC South team.

A few more stalled drives ate up much of the rest of the fourth quarter. The Falcons were able to put together a quick touchdown drive, missed another extra point, and closed the Panthers lead to a 22-15 gap.

A quick, 13-second possession by the Panthers ended with another punt thanks to efficient timeout usage by the Falcons and gave the Falcons 2:33, the two-minute warning, and one timeout to try to take the lead. First and second down went backwards with a one- and eight-yard loss on consecutive plays. An incompletion on third down set up the Panthers for a Marquis Haynes sack on fourth down that effectively ended the Falcons comeback attempt.

The turnover on downs left the Panthers in field goal range once again which allowed them to put the game away with one last kick.

The Panthers won 25-15 on the strength of a ground game that produced 232 yards, including 130 by Foreman alone.

A ray of light has come from the recent Rohingya resolution passed by the UN General Assembly’s Third Committee. The perpetrators of the crimes done against the Rohingya population can finally be brought to justice with the assistance of the international community. The current political situation in Myanmar has worsened the human rights situation of Rohingya Muslims and other minority communities there. The UN General Assembly unanimously passed a resolution on the ‘Human Rights Situation of Rohingya Muslims and Other Minorities in Myanmar’. It is expected that the international community will play a stronger role in the Rohingya issue after the unanimously adopted resolution at the United Nations.

The Jacksonville Jaguars traveled to Kansas City to take on the Chiefs for a game at GEHA Field at Arrowhead Stadium on Sunday, and walked away with a loss by a final score of 27-17. The Chiefs took the ball and quarterback Patrick Mahomes moved his team down the field with relative ease. @MVS__11 gets his first tuddy as a Chief‼️: #JAXvsKC on CBS pic.twitter.com/uMVXAoo9Gc — Kansas City Chiefs (@Chiefs) November 13, 2022The teams then traded a few punts before Kansas City found the end zone again. Patrick finds Noah wiiiiide open: #JAXvsKC on CBS pic.twitter.com/n0fenS0gxM — Kansas City Chiefs (@Chiefs) November 13, 2022On the ensuing kickoff, Agnew returned it all the way up to the Jacksonville 39-yard line. Pro tip: keep someone on @tkelce at all times pic.twitter.com/hx1gvov2nd — Kansas City Chiefs (@Chiefs) November 13, 2022The Jaguars were forced to punt on the ensuing possession.

Will Egyptian billionaire soccer mogul get San Diego favors? News that East County's Sycuan gambling tribe and an Egyptian billionaire are on the verge of bankrolling a major league soccer team in San Diego has set off a big round of huzzahs on the Union-Tribune's October 28 front page. “An MLS franchise anchored in San Diego would be a win-win for the entire San Diego region,” the paper quoted a statement by Sycuan chief administrative officer Adam Day. '”But a July 8, 2021 Forbes item noted concerns raised by Mansour Group's investment in FC Nordsjaelland, a professional Danish soccer team. Many questions about Mansour's involvement with Sycuan and the putative San Diego soccer venture revolve around potential future costs to the public for so-called stadium enhancements needed to house soccer at the SDSU facility, built for college football.

Should The Tiffany Valiante Case Be Reopened In Mays Landing, NJ?

The NJ Transit authorities would go on to declare Valiante's death a suicide, but the family wasn't buying it. A few days after the episode aired on Netflix, I saw a petition circulating on social media to reopen Tiffany's case. I truly believe this case deserves to be reopened and handled by a department that actually knows how to handle cases like this. Members of Tiffany's family allegedly found body parts of hers around the tracks where she was struck. If you're thinking the same thing, sign the petition to get the case reopened.

There is now added incentive for the Carolina Panthers ahead of what promises to be a crucial Week 8 clash with the Atlanta Falcons. If the Carolina Panthers needed any further motivation for their upcoming divisional clash against the Atlanta Falcons, they got it in no uncertain terms. This obviously means that if the Panthers down the Falcons on the road, it will put them in command atop the NFC South with a 3-5 record. Carolina Panthers have hope again in 2022Now, there is hope again. But the line has come in significantly from the start of the week, which began with Carolina sitting at +6.5.

Did the Panthers win? The Carolina Panthers beat the Atlanta Falcons 19-13 in a 2021 NFL game on Sunday in Atlanta.

Falcons 15 vs 25 Panthers summary: stats and highlights - AS English

The Carolina Panthers beat the Atlanta Falcons at their own game, rushing for over 200 yards in their 22-15 win on Thursday Night Football.

Carolina pulled a comfortable upset against division rival Atlanta, 25-15, as D'Onte Foreman carried 31 times for 130 yards and a touchdown

Instant Replay: What stood out in Falcons game vs. Panthers on