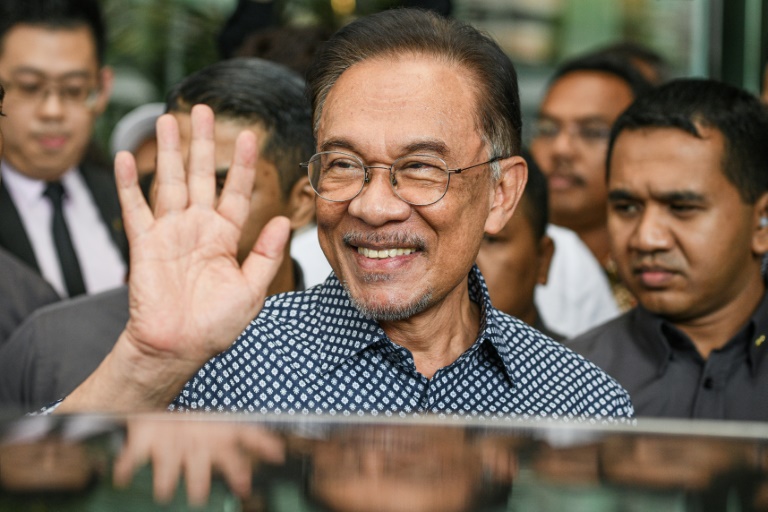 The 75-year-old was scheduled to be sworn in at 5 pm (0900 GMT), becoming the country’s fourth leader in as many years.

His ascension will cap a turbulent political life for Anwar, during which he has sat near the apex of power, as well as serving jail time on corruption and sodomy charges.

“After taking into consideration the views of Their Royal Highnesses the Malay Rulers, His Majesty has given consent to appoint Anwar Ibrahim as the 10th Prime Minister of Malaysia,” read a statement from the palace of the king, Sultan Abdullah Ahmad Shah.

Anwar’s multi-ethnic Pakatan Harapan coalition won the most seats in the weekend’s election, on an anti-graft message.

The king had summoned Anwar and former prime minister Muhyiddin Yassin — whose Perikatan Nasional bloc got 73 seats — in an attempt to break the deadlock, but no deal could be struck.

Muhyiddin, who was backed by an Islamist party, told reporters Tuesday that the monarch had initially asked him and Anwar to form a “unity government”.

For Anwar, the premiership is the culmination of a rollercoaster 25 years.

The firebrand former student activist was close to power in the late 1990s, as finance chief and deputy prime minister to Mahathir Mohamad.

But the two had a bitter falling-out over how to handle the 1997-98 Asian financial crisis.

Mahathir sacked Anwar, who was also expelled from their then party the United Malays National Organisation (UMNO), and charged with corruption and sodomy.

Anwar was sentenced to six years in jail for corruption in 1999, with an additional nine years added for the sodomy charge the following year, the two sentences to run consecutively.

The Mahathir-Anwar tussle has dominated and shaped Malaysian politics over the past four decades, “alternately bringing despair and hope, progress and regress to the country’s polity”, according to Oh Ei Sun of the Pacific Research Center of Malaysia.

The Malaysian Supreme Court overturned Anwar’s sodomy conviction in 2004 and ordered him freed.

Anwar allied with Mahathir during the 2018 elections, when his erstwhile tormentor came out of retirement to challenge incumbent Najib Razak, who was mired in the billion-dollar 1MDB financial scandal.

Their alliance scored a historic victory against UMNO and Najib, who is now serving a 12-year jail term for corruption.

Mahathir became prime minister for the second time, with an agreement to hand over the premiership to Anwar later.

He never fulfilled that pact, and their alliance collapsed after 22 months, leaving Anwar empty-handed again.

“One of his agendas is to ensure he is able to fulfil his reform agenda as he looks to stabilise a loosely cobbled federal coalition.”

Warriors: Rockets demise is a reminder to not take Curry for granted

The Warriors won again on Saturday night, beating the Rockets 120-101. But Houston’s demise is a reminder of two big things for the Warriors:1. Think about how long it took the Warriors to find Curry in the first place. Realistically, the best the Warriors organization can do is try to maintain a baseline level of competence for when Curry exits or declines. Perhaps amid that delusion, the Dubs can do enough to hold off the years of rock bottom the Rockets are currently experiencing.

Tulane shreds UCF in American Athletic Conference championship game; 3 takeawaysUCF pulled out all the stops to win one last American Athletic Conference on the way out the door. Certainly not against AAC Offensive Player of the Year Tyjae Spears, senior quarterback Michael Pratt and a revenge-thirsty Tulane team. UCF (9-4), four-time champs of the AAC in its 10-year tenure, will learn its bowl destination Sunday afternoon. Game recap: UCF Knights rally, but come up short against Tulane in AAC championshipPHOTOS: UCF Knights vs. Tulane Green Wave in AAC ChampionshipBut UCF couldn't find a way to slow Tulane. Here are three takeaways from a historic day for Tulane and a disappointing swan song for the Knights.

Most innovative headphones of 2022

You might think that there’s simply no more room for new features or improvements, and yet if anything, the pace of progress — especially in headphones and earbuds — has only increased. In 2022, companies started to look at ways to overcome wireless audio’s traditional limitations, sometimes successfully, sometimes a little less so. The Nura True Pro are the first earbuds to support Qualcomm’s aptX Lossless codec, which is itself the first lossless Bluetooth codec on the market. But in order for aptX Lossless to work, it has to be supported on both the earbuds and the smartphone. Still, Nura knew that was a possibility and decided to push ahead anyway, hoping its commitment to innovation would pay off eventually.

Malaysian opposition leader Anwar Ibrahim has been named prime minister, the palace said in a statement Thursday, ending a days-long

Malaysia's king has named reformist opposition leader Anwar Ibrahim as the country's next prime minister, ending days of uncertainty after

1 hour ago - SC asks high courts to decide PTI pleas in ECP contempt case at the earliest 1 hour ago - PM to hold cabinet crisis talks after rail union adds more Christmas strikes 1 hour ago - RBI MPC: What is it? Why is it important? What do analysts say? Here's all you need to know 1 hour ago - Yes Bank revises FD interest rates; earn up to 7% on this FD tenure 1 hour ago - His power secure at home, China’s Xi Jinping goes on a charm offensive abroad 1 hour ago - Bentonite Market is Projected to Reach US$ 2.81 Billion in 2028 1 hour ago - England fan who witnessed 1966 World Cup final win hopes for repeat in Qatar 1 hour ago - When to Expect the Peripheral Season 2 Release Date? 1 hour ago - Below Deck’s Fraser Olender shares 'struggle' of Chief Stew role: 'Not here to be friends' 1 hour ago - Tom Brady throws for 2 late TDs, Bucs beat Saints 17-16 1 hour ago - Scarlet Fever and invasive Group A strep 1 hour ago - Letters to the Editor | Dec. 6, 2022 1 hour ago - Opinion: In every Ukrainian kitchen, a secret weapon against Putin 1 hour ago - How Old Was Sandra Bullock in the Proposal? The Film Grossed Over $137 Million! 1 hour ago - Conservative SCOTUS majority under scrutiny in major ‘independent legislature’ elections case 1 hour ago - Grand Canyon National Park 1 hour ago - Rookie Nembhard has 31, leads Pacers past Warriors, 112-104 1 hour ago - Salesforce (NYSE:CRM) Price Target Cut to $225.00 1 hour ago - Transgender Journey: Mutability of Identity 1 hour ago - Commonwealth Bank of Australia : CBA announces rate changes 1 hour ago - Waterlooville pupil believed to have died from Strep A infection 2 hours ago - Sunburn — The morning read of what’s hot in Florida politics — 12.6.22 2 hours ago - Monday's Sports In Brief 2 hours ago - Kroo bank account: Is it better than Monzo or Starling? 2 hours ago - Elon Musk's brain-implant firm Neuralink under scanner over animal abuse 2 hours ago - A Disastrous Pre-Sale: Taylor Swift Fans Sued Ticketmaster 2 hours ago - Ronaldo eyes World Cup quarters as Morocco dare to dream 2 hours ago - Lawsuit alleges writer-director James Toback is a 'serial sexual predator' 2 hours ago - Innovation finance evidence pack (HTML) 2 hours ago - Brady throws for 2 late TDs, Buccaneers beat Saints 17-16 2 hours ago - How Cinema Audience Behavior Has Been Changed by COVID – CineAsia 3 hours ago - World Cup Viewer’s Guide: 2 Quarterfinals Places Left 3 hours ago - Rosenthal: MLB’s massive free agent spending is just beginning. Explanation of forces at work. 3 hours ago - Elon Musk fever in EU's poorest country Bulgaria in anticipation of his visit 3 hours ago - Neuralink: Elon Musk's plan to implant a chip in the human brain: Why? - 3 hours ago - Tom Brady and Bucs figure out how to beat Holy people on game-dominating TD in conclusive seconds 3 hours ago - What Consumer Duty means for smaller advice firms 3 hours ago - Brazil-Argentina semi-final moves another step closer 3 hours ago - James Harden returns as 76ers deliver another dud in loss to Rockets 3 hours ago - Hospitality: The growth of hospitality courses abroad: Here is what you should know, Hospitality News, ET HospitalityWorld 3 hours ago - Tatum Leads Celtics Over Raptors, Pacers Beat Warriors 3 hours ago - Attacks on Russian air bases put spotlight on new Ukrainian drone program 3 hours ago - Musk’s Neuralink faces federal probe over animal tests 3 hours ago - Morocco Dare To Dream: Cristiano Ronaldo Eyes World Cup Quarterfinals 4 hours ago - Tatum leads Celtics over Raptors; Curry struggles vs Pacers 4 hours ago - Tom Brady and the Bucs find a way to beat the Saints on a game-winning TD in the dying seconds 4 hours ago - Nelly & Ashanti Steamy Performance Has Fans Calling For The Former Couple To Reunite 4 hours ago - Kirstie Alley’s Kids: Everything To Know About The Late Star’s 2 Children 4 hours ago - Kirstie Alley: A mainstay of the screen in the 80s and 90s as Cheers propelled her to stardom 4 hours ago - Uddhav vs Eknath Shinde : Supreme Court To Hear Petitions Related To Shiv Sena Rift On January 13, 2023 4 hours ago - Cincinnati hires Louisville’s Satterfield to replace Fickell 4 hours ago - Was Kirstie Alley a scientologist? Beliefs explored as the actress passes away at 71 4 hours ago - India resumes e-visa service for UK travellers: What is it and how is it different from regular visas? 4 hours ago - Sixers Coach Doc Rivers Calls for Rule Change After Joel Embiid Mishap 4 hours ago - Odds, line, and spread for 76ers vs. Rockets:2022 NBA picks, Dec. 5 from a reputable computer model 4 hours ago - NBA roundup: Rockets outlast Sixers in double OT 4 hours ago - Rookie Nembhard scores 31, Pacers stun Warriors 112-104 4 hours ago - Kirstie Alley, ‘Cheers’ Star, Dies At 71- Cause Of Death Explained 4 hours ago - Salesforce (NYSE:CRM) Reaches New 1-Year Low Following Analyst Downgrade 4 hours ago - Yankees won’t make Aaron Judge wait as long for a decision as offseason