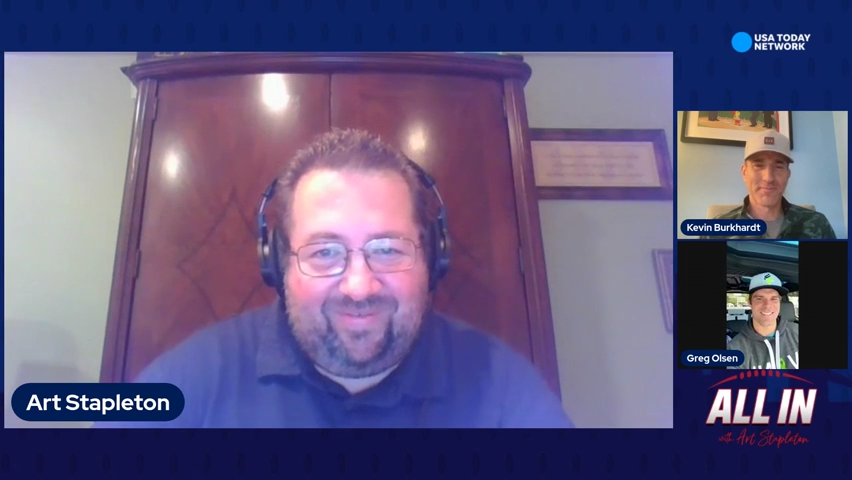 ARLINGTON, Texas - The Giants got a reality check in their loss to the Detroit Lions four days ago. Now comes the gut check.

Because despite all the optimism that surrounded Brian Daboll's Giants for the first three months of the season, and rightfully so, given the best start for the franchise since 2008, they'll take the field inside AT&T Stadium for their clash on Thanksgiving against the Cowboys overwhelmed by a bunch of uncertainty.

And the challenge of facing a Dallas team - sporting the same 7-3 record - that is coming off its best showing in a while after putting 40 points on the 8-win Vikings on the road in a blowout victory.

So what does that mean for the Giants? A tall task to pick up a triumph on Turkey Day, but an opportunity to prove their mettle.

Daniel Jones is 1-4 as a starter against the Cowboys, including three losses in games started by Dak Prescott. Prescott, meanwhile, is 9-2 in his career against the Giants, including nine straight starts after losing twice in his rookie season.

Keep checking back for live updates throughout the day.

The Giants came out aggressive and they need to stay that way offensively. That allowed them to answer the Cowboys' first touchdown of the game on an Ezekiel Elliott run when Daniel Jones dialed up a deep shot to Darius Slayton, who made an acrobatic catch down to the 1-yard line.

Two plays later, Saquon Barkley scored from two yards out and the Giants were back in front, 10-7.

The Giants' defense got off the field with a turnover on downs and an interception on the first two drives. They got 3 points from the offense out of it. The defense is doing its job. Need to do more offensively. Giving up pressure on third and 1 and leading to Jones' rushed throw isn't complementary football.

On the next series, Jones felt the pressure again on a third-and-short, but was able to get the ball out to Richie James, who made a nice grab to move the sticks at midfield.

Graham Gano looked like death warmed over in Sunday's loss to Detroit. He missed two extra points, one of which was blocked. But by Tuesday, Gano said he was feeing better, and early against the Cowboys, he looked it.

The Giants settled for a 57-yard field goal after forcing a turnover on downs when Jaylon Smith and Jason Pinnock stopped Ezekiel Elliott short of the sticks on fourth and short. And Gano nailed the kick with room to spare.

The Giants failed to cash in on Rodarius Williams' first career interception when Dak Prescott threw to a spot and Cee Dee Lamb vacated that area in an apparent miscommunication.

The Giants will be without three starters on the offensive line, and against the Cowboys' dominant front, it's reason to be concerned about the game plan. Nick Gates is expected to start his first game at center since Week 1 of the 2020 season, five days before he suffered a gruesome leg injury that kept him out of action since following seven procedures to repair the damage.

Jack Anderson could step in at left guard. Andrew Thomas, listed questionable with an illness, should be able to give it a go at left tackle. Tyre Phillips and Matt Peart could split time at right tackle.

Cowboys 31, Giants 20: The Giants need a better showing in this spot than the one they had at home on Sunday against the Lions. They are shorthanded, especially at cornerback without their starting tandem of Adoree' Jackson and Fabian Moreau, leaving rookie Cor'Dale Flott, Rodarius Williams and Nick McCloud to step in. This can't be a game where the Giants are not competitive, and there is some urgency to show they can scheme up some things that catch the Cowboys off guard. In the end, the Giants' only chance is to cause turnovers and get their best players - Saquon Barkley, Dexter Lawrence and Leonard Williams - to make game-changing plays, which they have done in key spots earlier this season.
Continue reading...

Brooks Raley: 3 Things to know about new Mets pitcher acquired in trade with RaysThe two biggest tasks for the Mets front office throughout the offseason was filling their stable of pitchers. Mets management has acted quickly, and on Wednesday, they bolstered their bullpen when they brought in left-hander Brooks Raley in a trade with the Rays in exchange for Keyshawn Askew, a 2021 10th-round pick. Upon his return, Raley signed with the Reds in 2020 and finished the season with the Astros. He signed a rare multiyear deal with the Rays and will be entering the final year of his two-year, $10 million deal this season. The Mets will have a $6.5 million club option to retain Raley for the 2024 season.

As unrest spirals in China over 'zero-COVID' policies, these Chinese Americans worry

As unrest spirals in China over 'zero-COVID' policies, these Chinese Americans worry 3 minute readShow Caption Hide Caption Protests escalate in China over ‘zero-COVID’ policy Protesters in China are calling for the end of the “zero-COVID” policy and the Communist party, as well as for the resignation of leader Xi Jinping. Others also noted challenges for Chinese Americans who seek to reunite with their families in the coming months — as well as exasperation. New Jersey Chinese Americans are keeping in touch with relatives during these uncertain times through WeChat, texts and emails. New Jersey has the fifth-largest population of Chinese Americans — behind only California, New York, Hawaii and Texas. Echoes of TiananmenNot since the Tiananmen protests of 1989 have so many Chinese risked arrest and personal safety to protest government policies.

Things worsened when Kenny Golladay had the second of two drops in the game on a play late in the second quarter that would have moved the sticks and given the Giants some momentum. Fourth quarter pressureThe Giants' defense has brought the heat against the likes of quarterbacks Aaron Rodgers and Lamar Jackson in the fourth quarter. Mills has the third-lowest completion percentage in the fourth quarter this season at 54.4% behind the Raiders' Derek Carr (51.9%) and the Broncos' Russell Wilson (54.1%). It'd be incredibly beneficial for the Giants to force the Texans to play from behind in the second half. PredictionGiants 27, Texans 19: The Texans' run defense has been torched by elite backs this season, including Derrick Henry's 219-yard performance - the highest total in 2022 - in Week 8.

This NJ man is pushing a shopping cart across America to help homeless veteransFor all its sacrifices, the COVID-19 pandemic has been a trigger for many to discover new dreams. He's walking 3,000 miles across the continent, pushing a shopping cart spray-painted red, white and blue to raise money for homeless veterans. All the miles he's walked have garnered attention and helped raise thousands via his GoFundMe page. All donations go to The National Coalition for Homeless Veterans. “Helping veterans in any way I can has always been something that I have been passionate about,” he added.

Knicks at Nets odds, picks & predictions: Here's how to bet this New York showdownShow Caption Hide Caption NBA Futures: Who will win MVP, ROY and who will be crowned Champs? On SiteThe New York Knicks (5-5, 3rd in Atlantic) travel to Brooklyn for the first time this season as they take on the Nets (4-7, last in Atlantic) on Wednesday night at the Barclays Center. Here are my picks and predictions for this New York showdown on Wednesday night with odds powered by Tipico Sportsbook. Here are their chances to reach postseasonSpread: Knicks +2.5 (-105)Just like their .500 record, the Knicks are also 5-5 against the spread (ATS) this season. While New York started 3-0 ATS, it's only covered the spread in two of its previous seven games.

How to keep the Mets a 100-win team? With Edwin Diaz locked down, here's what's next

How to keep the Mets a 100-win team? USA TODAYNew York Mets management has arguably the toughest assignment of any Major League Baseball organization this offseason. Locking up both players would likely cost the team in excess of $60 million per season over the next several years. The Mets have a $13 million team option on Carlos Carrasco. Bullpen is a key factorOver the course of the season, the Mets did not have much balance in their bullpen.

Powerball drawing for Monday, Nov. 7 remains delayed. Here's why and when it may happen

Saquon Barkley was knocked from the NY Giants' 44-20 loss to the Dallas Cowboys with an ankle injury, after planting awkwardly catching a pass

What channel is Dallas Cowboys game today vs. Giants on - NJ.com