Neymar injury update: Latest news on Brazil World Cup star's ankle problem that had him in tears vs Serbia

Brazil have started their 2022 FIFA World Cup campaign in fine form, with a 2-0 win over Serbia on Thursday — but there is a looming big worry for the Selecao, after an injury to star striker Neymar.

Richarlison scored a second-half double in the crucial win, that sees the Selecao claim an early place at the top of Group G.

But more worrying was that superstar Neymar left the field in tears, after suffering a heavy knock late in the game to his ankle.

The PSG attacker is no stranger to suffering injuries at the worst time, and all eyes will now be on his fitness moving forward.

The Sporting News will keep you updated with the latest as the Brazil striker's injury is assessed.

MORE: Brazil World Cup squad, who could replace Neymar if he is injured?

After playing a part in Brazil's opening goal against Serbia on November 24, Neymar was forced from the field in the 80th minute.

The 30-year-old had been down on the ground after being subjected to a heavy tackle that seemed to hurt his right ankle, which was immediately treated by Brazil's medical staff.

Neymar targeted throughout the Serbia match, fouled a tournament-high nine times, and he eventually felt the full weight of one of those challenges.

Neymar was visibly emotional after leaving the field, and he was seen in tears on the bench — with fears the injury may now limit his involvement in the 2022 World Cup.

Brazil will look to assess the injury further, with likely scans over the next 24 hours to confirm the extent of Neymar's latest blow.

Based on his immediate reactions and the subsequent swelling, the news may not be good for him or the team, as they look to win their first World Cup in 20 years — although coach Tite told the press afterwards that he is hopeful it will not be serious.

Neymar had to exit the pitch late in their clash with Serbia with an apparent ankle injury. 😬 pic.twitter.com/XQNjCmWPD3 — CBS Sports Golazo ⚽️ (@CBSSportsGolazo) November 24, 2022

When will Neymar play again for Brazil?

While there's no firm details on Neymar’s injury just yet, based on the early swelling and contact, it seems highly unlikely he will play in Brazil’s next match against Switzerland on November 28.

Should Tite's side win that game, they'd be all-but guaranteed a place in the knockout stage, meaning Neymar would not need to be risked against Ghana even if his recovery is on track.

Based on the above scenario, that gives Neymar around 11 days to rest and try to be fit before Brazil likely take to the field in the Round of 16.

Who could Brazil replace Neymar with?

An injury to Neymar would leave a rather big hole to fill on the pitch for Brazil.

He was pivotal in their opening goal of the 2022 World Cup against Serbia, with his one-on-one ability nearly impossible to match.

Neymar was replaced by Antony against Serbia and the Manchester United youngster certainly has the creative skills to fill some of Neymar's void.

Newcastle United star Bruno Guimaraes looms as another possible option, and the 25-year-old wasn't used at all in Brazil's opening match, so he will be raring to go.

Guimaraes is slightly more defensive-minded than Neymar, however, so Tite may need to shift his formation somewhat to account for that. 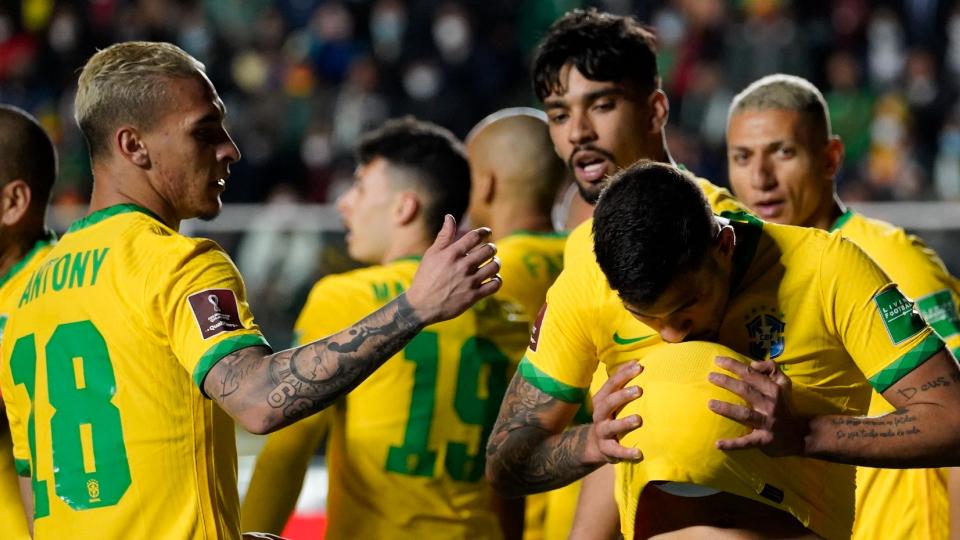 Unfortunately, Neymar is no stranger to injuries at the worst possible time when it comes to playing for Brazil.

The 30-year-old missed his team's infamous 7-1 loss to Germany at the 2014 World Cup after hurting his back.

Four years later, Neymar struggled somewhat in Russia after fracturing his fifth metatarsal just three months before the start of the tournament.

It now appears to be a case of third time unlucky, as Brazil sweat on their superstar's fitness in Qatar.

Neymar had arrived at the 2022 World Cup in form and fit, with his last injury absence at club level dating back to early February this year.

Whoever says the full-length album is a dying art form hasn’t been watching the Christmas music. Here’s my take on this year’s albums vying for your Christmas music dollars. ‘Merry Christmas, Love’Joss StoneA Christmas album seems like a natural vehicle for Stone, but her soulful, bluesy sound doesn’t often materialize. The jazz great holiday singles are for the first time collected here to make for a timeless, cheery holiday album. The playing shines on the bluegrass/gospel group’s collection of Christmas classics and a few original tunes.

53 minutes ago Greensboro News and Record

The party has fielded its candidate on all 182 assembly seats and carried out a high-decibel campaign in the run-up to the polls to breach the BJP's Gujarat bastion. Already recognised as the state party in Delhi, Punjab and Goa, the AAP is just a state away from earning national party status. "The AAP is hoping to win more seats than what has been projected by the exit polls and political analysts. Poll results will prove all the exit polls wrong on December 8," AAP Gujarat unit's chief spokesperson Yogesh Jadvani asserted when asked for his comment. The party gained ground in the BJP-ruled Gujarat after it won 27 seats in the 2021 Surat Municipal Corporation elections.

Balwani’s sentence was less than the 15 years sought by federal prosecutors, who depicted him as a ruthless, power-hungry figure. Former Theranos CEO Elizabeth Holmes walks into the federal court in San Jose for her trial, on December 21, 2021. Balwani spent six years as Theranos' chief operating officer while remaining romantically involved with Holmes until a bitter split in 2016. While on the witness stand in her trial, Holmes accused Balwani of manipulating her through years of emotional and sexual abuse. Balwani and Holmes met around the same time she dropped out of Stanford University to start Theranos in 2003.

Wellbeing: Adrian Chiles on how to drink mindfully, not mindlessly this Christmas

The Good Drinker by Adrian ChilesWHEN broadcaster Adrian Chiles started to investigate his drinking, he was in for a rude awakening. "It all boils down to what I call mindful drinking, being aware of what you're drinking, not pointlessly drinking." I don't want it to be the case that my liver's knackered or that I can't drink one drink without drinking 10. :: The Good Drinker: How I Learned To Love Drinking Less by Adrian Chiles is published by Profile Books, priced £14.99. ESTIMATE HOW MUCH YOU'RE GOING TO DRINK"Try to work out what how much you are likely to drink over Christmas and New Year," says Chiles.

World Cup 2022: Tears as Neymar injured during Brazil vs. Serbia

World Cup 2022: Tears as Neymar injured during Brazil vs. Serbia. The Brazil captain suffered an ankle injury in his team's 2-0 win over

Neymar was left in tears on the Brazil bench with an apparent ankle injury suffered in the win over Serbia at the World Cup.

Neymar Injury Update: Brazilian striker Neymar should be fine to continue in the World Cup despite limping off with a swollen ankle during

Neymar will undergo scans on an ankle injury that he sustained in Brazil's World Cup win over Serbia on Thursday.

DOHA: Brazil captain Neymar suffered a sprained ankle in his team's World Cup win over Serbia on Thursday and faces a medical assessment in

Neymar suffered a right ankle injury after being tackled by Serbia's Nikola Milenkovic. Brazil coach Tite replaced him with Antony with 11

LUSAIL, Qatar -- Neymar was pictured in tears on the Brazil bench after leaving his team's 2-0 win over Serbia to begin their World Cup

Neymar suffers ankle injury after being fouled 9 times vs Serbia

An update has emerged on the injury sustained by Neymar during Brazil's 2-0 win over Serbia in the World Cup on Thursday.

We know that Neymar is going to miss Brazil's next World Cup game, against Switzerland, with an ankle injury. He has now shared an update with