13 days ago The Register Guard 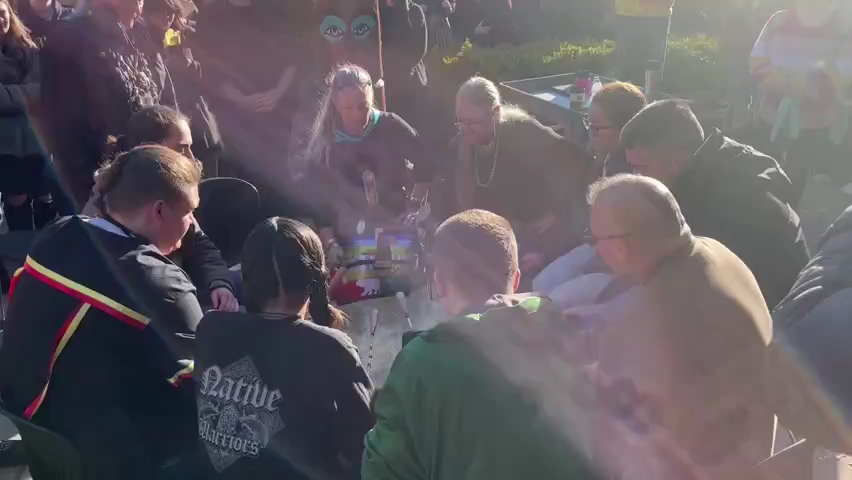 The students in the Native American Student Union said the recognition and acceptance from other students was uplifting.

Steven Lee Bryan, a senior at NEHS, said he feels comfortable talking about his Cherokee culture and heritage in a way he never had before. After talking on a student panel about being Indigenous in Eugene, he received significant positive feedback from his peers.

"I've gotten so many reactions, each time it's a different one," Lee Bryan said. "I wish that my sixth grade year I knew about my tribe, and I knew that there was a Native American meeting at the school. Just hanging out with everybody is just a great experience."

Lee Bryan joined the NASU group at North Eugene his junior year of high school. He was invited by his friend and recent NEHS graduate Keith Schnick, who graduated in May and is Chiricahua Apache. Schnick and several other recent graduates came back to the school for the Indigenous celebration to support the younger students.

The Indigenous People's Day celebration at NEHS is normally held during Native American Heritage Month or occasionally on the true Indigenous People's Day holiday. This year, a three-presentation rotation took NEHS students through Oregon history, innovative indigenous music and a panel on NASU students' experiences. To close out the celebration, a drum circle was held at the totem pole of the school.

Schnick, who was a member of NASU starting his freshman year, said students this year showed significantly better support than in the past.

"(Compared to my) freshman and sophomore year, this year went a lot better," Schnick said. "Those years we got a lot of kids talking and kind of making fun of it. So it was good to see kids at least, like, be silent, because then it's like they care."

During the NASU panel, students in the audience asked questions. One student asked how the students at NEHS could better support their native peers.

Schnick responded by recommending people keep up-to-date on native issues and get involved with them, such as the missing and murdered Indigenous women movement.

"It's hard to be an ally," Schnick said. "Just be more aware. If you have the chance to come to our meetings or maybe even if it's outside the school, I would always suggest just going and showing support for any of our movements. Even just one more non-native showing up could help us a lot. Even one voice is better than none."

Recognizing Indigenous people during the holidays

Some of the current and former students shared their thoughts on the holiday and suggested ways the community can recognize Indigenous people during this time.

Halie Nightpipe, who is Lakota Sioux and graduated from NEHS in 2021, said Indigenous people have varied opinions on the holiday. Some celebrate Thanksgiving while others choose not to.

She said her family uses the day as a day to join together and feast, but they do not recognize the supposed harvest feast shared between colonists and the Wampanoag people.

"We take that away into bringing it to a family-oriented holiday and we celebrate it with each other," Nightpipe said. "It's more of a day to get together and hang out with the family and just enjoy each other's company and enjoy the food."

Alán Ortiz, a freshman at NEHS who is Navajo and Zapotec, said his family celebrates in a similar way.

"We never really associated Thanksgiving with the origins of Thanksgiving, about the settlers," Ortiz said. "We think of it as a holiday to just feast. During Thanksgiving, we always stay silent for a moment and just remember our ancestors."

Lee Bryan said one way people can keep Indigenous people in mind during the holiday is by doing their own research about local tribal communities and nations, looking into their traditional clothing, songs, food and more.

Lee Bryan and several other students suggested attending a local powwow or other public events to learn and connect with different cultures.

The NASU stressed the importance of supporting Indigenous peers during the holidays and beyond.

Brenda Brainard, former executive director of the Eugene School District 4J Natives Program, explained the meaning behind the drum circle performance. She said the song is recognized as the "Native American national anthem," but was originally a Northern Cheyenne war song.

"Sometimes you have to be a warrior in your own life," Brainard said in relation to the song.

She said North Eugene has really stepped up as a school.

"North Eugene is possibly the most supportive high school that we have, and they have made a commitment to do this every year," Brainard said. "Other schools are hit and miss depending on who... their NASU kids are, but the administration at North Eugene has really made the commitment to make this happen."

Nightpipe said she continues to return to NEHS to support the NASU group. She said it's great when non-native students choose to join the union or sit in on their meetings.

Nightpipe said it's an opportunity to share their culture and for non-native students to learn about different communities.

"We're letting the public know who we are and what we represent," Nightpipe said. "As we get to know each other, we become a family."

Miranda Cyr reports on education for The Register-Guard. You can contact her at [email protected] or find her on Twitter @mirandabcyr.
Continue reading...

Read On "The Register Guard"

More News On "The Register Guard"

40 minutes ago The Comeback

44 minutes ago The Economic Times

What Makes a Great Gift?

Students, read the entire article, then tell us:What, in your opinion, makes a great gift? Conversely, what makes a terrible gift? What’s the best or most memorable gift you’ve received? What’s the worst gift you have received? Have you ever gotten a gift that left you confused, feeling insulted or wondering if the giver knew you at all?

57 minutes ago The New York Times

How Streaming Has Rewritten the Script for Movies

The death of movies has been announced at least once a decade since the beginning of the sound era. It’s even harder to determine how many new subscribers signed up for the purpose of watching that movie. Not that these stars, in the era of studio power, were shakers and movers in the system. Movie stardom became a global phenomenon, and new styles of acting conquered Hollywood. In spite of competition from television, from professional sports, and from rock ’n' roll, movies remained at the summit of mass culture, and movie stardom established the gold standard of modern celebrity.

1 hour ago The New York Times

Giannis Antetokounmpo, Since ‘The Ladder Incident’, has averaged 36 and Tied 7’2″ Kareem Abdul-Jabbar

The Knicks picked up a huge win over the undermanned Hawks thanks to big nights from Julius Randle and Quentin Grimes. The New York Knicks (12-13) defeated the Atlanta Hawks (13-12) in an impressive 113-89 victory at Madison Square Garden. After an impressive win over former-future-Knick Donovan Mitchell and the Cleveland Cavaliers on Sunday, the Knicks took care of business at home against an injury-hobbled Hawks team. Overall, the Knicks were able to stomp out the Hawks due to the play of their star player for the night: Julius Randle. Related Content:»Read: The Knicks are in the Midst of an Identity Crisis»Read: The Knicks Must Be Realistic In Their Next Star Search

1 hour ago The Knicks Wall

The New York Times is bracing for a 24-hour walkout Thursday by hundreds of journalists and other employees, in what would be the first strike of its kind at the newspaper in more than 40 years. Newsroom employees and other members of The NewsGuild of New York say they are fed up with bargaining that has dragged on since their last contract expired in March 2021. The union announced last week that more than 1,100 employees would stage a 24-hour work stoppage starting at 12:01 a.m. Thursday unless the two sides reach a contract deal. Employees are planning a rally for Thursday afternoon outside the newspaper’s offices near Times Square. The NewsGuild also said the company told employees planning to strike they would not get paid for the duration of the walkout.

3 hours ago The Financial Express

A student who was injured in a shooting at Ingraham High School in north Seattle Tuesday morning has died, according to officials.

A student is in custody after being found with a gun at Natrona County High School on Friday. Students and staff are safe.

SEATTLE, Wash. — A student who was injured in a shooting at Ingraham High School in north Seattle Tuesday morning has died, according to

SEATTLE (KOMO) — A group of students at Ingraham High School in North Seattle said they were threatened by two people with an AR-15.

A 16-year-old male student has died at Selma High School and three others Much Cooler Today with Rain Returning Tomorrow - Alabama News.

1,000 Students At Virginia High School Out Sick With 'Flu-Like

"There are approximately 1,000 students absent with flu-like/gastrointestinal symptoms at Stafford High School. Our Health Services team is

Student charged with making a threat at Marshall High School

MARSHALL (JG-TC) -- A 19-year-old student has been arrested on charges in connection with making a threat at Marshall High School.

A male student is facing criminal charges after an incident involving a replica firearm sent a North Bay high school into lockdown Thursday,