LGBTQ2S+ and other rights issues at World Cup a 'huge blemish' on FIFA: Hall of Famer 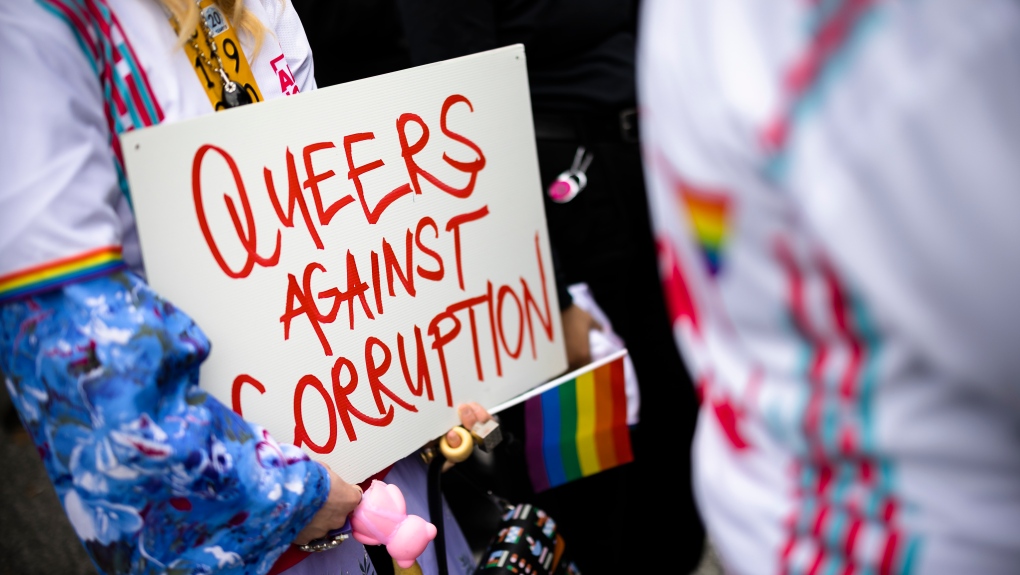 Carrie Serwetnyk, the first woman inducted into the Canadian Soccer Hall of Fame and an advocate for equal rights in sports,is in Qatar for the 2022 World Cup and says the event is "still trying to find its joy."

The tournament, which kicked off Sunday and runs until Dec. 18, has faced a swirl of concerns about LGBTQ2S+and other human rights issues.

Captains of several European countries scrapped plans to wear a "OneLove" armband as a show of solidarity with the LGBTQ2S+community after FIFA, soccer's governing body, warned they would face on-field sanctions. Media reports from Qatar also said some fans wearing rainbow attire were refused entry to the stadiums.

Serwetnyk, who is a gay woman, said she feels very safe in Qatar during the World Cup, but acknowledges the concerns.

"If I lived here, that would probably be a different story. It's such a conservative country," she said. "I don't think that fear is imagined."

She has attended eight other FIFA World Cups and five FIFA Women's World Cups. She said human rights issues have cast a "shadow" over the event this year.

"There's been so much negative attention to the tournament in the press with human rights, worker's death and LGBTQ2S+issues, it seems like the tournament is still trying to find its joy," she said.

"Of course, this is a huge blemish on (FIFA). They're getting battered by the press. I think they'll take a hard look at future choices, but I also think the Middle East deserves a World Cup."

Some rights activists have been using the World Cup to draw attention to the conditions of LGBTQ2S+citizens and residents in Qatar. Human Rights Watch has cited alleged cases of police brutality, arrests based solely on gender expression and government-funded forced conversion therapy for transgender people.

"The Qatari government should call an immediate halt to this abuse and FIFA should push the Qatari government to ensure long-term reform that protects LGBTQ2S+people from discrimination and violence," Rasha Younes, an LGBT rights researcher at Human Rights Watch, said in a news release last month.

Qatar has said all are welcome at the World Cup, including LGBTQ2S+fans, but that visitors should respect the nation's culture. It said public displays of affection by anyone are frowned on.

Josie Nixon of the You Can Play Project, which advocates for LGBTQ2S+people in sports in North America, said the scrutiny should shift away from the host country and "toward FIFA."

"Qatar existed in this lens before the microscope of the World Cup came to the region and ultimately, it was FIFA's decision to put their fans at risk, to put the LGBTQ2S+Qatari population at risk, by hosting a tournament there," Nixon said in an interview.

The You Can Play Project is part of a coalition advocating for human rights, but Nixon said there has been a "lack of effort" from FIFA to engage with the group.

The list of demands for FIFA and Qatari organizers include repealing laws targeting LGBTQ people, providing "explicit safety guarantees" against harassment, arrest or detention, and working to ensure the long-term safety of LGBTQ2S+people in the region.

"We are looking for alternative ways to make sure our fans are safe, to make sure that the fans across the world are feeling like they can still view the tournament without breaching any morals that they might feel are in question. There's a lot of boycotts going on," Nixon said.

Meanwhile, Soccer Canada announced that it is teaming up with the You Can Play Project.

"We are announcing this now because we want the international conversations around LGBTQ2S+ issues in Qatar to continue well beyond the final whistle, and to recommit to ensuring that our own policies, teams and the environments where we work and play are the safest they can be," Earl Cochrane, Canada Soccer General Secretary, said in a statement Friday.

He said the four-year partnership will "evolve" ahead of the next World Cup, which will be held across North America in 2026.

On Wednesday, Canada made its first World Cup appearance since 1986, losing 1-0 to Belgium. Canada's next game is Sunday against Croatia.

This report by The Canadian Press was first published Nov.24, 2022.

Balwani’s sentence was less than the 15 years sought by federal prosecutors, who depicted him as a ruthless, power-hungry figure. Former Theranos CEO Elizabeth Holmes walks into the federal court in San Jose for her trial, on December 21, 2021. Balwani spent six years as Theranos' chief operating officer while remaining romantically involved with Holmes until a bitter split in 2016. While on the witness stand in her trial, Holmes accused Balwani of manipulating her through years of emotional and sexual abuse. Balwani and Holmes met around the same time she dropped out of Stanford University to start Theranos in 2003.

Wellbeing: Adrian Chiles on how to drink mindfully, not mindlessly this Christmas

The Good Drinker by Adrian ChilesWHEN broadcaster Adrian Chiles started to investigate his drinking, he was in for a rude awakening. "It all boils down to what I call mindful drinking, being aware of what you're drinking, not pointlessly drinking." I don't want it to be the case that my liver's knackered or that I can't drink one drink without drinking 10. :: The Good Drinker: How I Learned To Love Drinking Less by Adrian Chiles is published by Profile Books, priced £14.99. ESTIMATE HOW MUCH YOU'RE GOING TO DRINK"Try to work out what how much you are likely to drink over Christmas and New Year," says Chiles.

Aaron Judge, Yankees reach 9-year deal worth $360 million US: reportAaron Judge has delivered his ruling: the court remains in session in the Bronx. Judge remains with the New York Yankees on a nine-year, $360 million contract, according to a person familiar with the deal. The contract only follows Mike Trout’s $426.5 million deal with the Los Angeles Angels and Mookie Betts’ $365 million pact with the Los Angeles Dodgers for the largest in baseball history. Judge was offered a long-term contract by New York worth $213.5 million over seven years from 2023-29 for last season. Judge set an American League record with 62 homers in 2022, propelling the Yankees to the AL East title.

While Prince Harry and Meghan Markle are more demonstrative with each other in public — especially since stepping down as senior royals — Prince William and Kate Middleton are still very "connected" to each other, a body language expert told Fox News Digital Wednesday. Body language expert Blanca Cobb said William and Kate are more "proper" and "royal." So, although they’re public or PDA might be a little different, they’re still a very connected and regal couple." MEGHAN MARKLE, PRINCE HARRY ARE ‘KNOWN FOR THEIR OWN VERSION OF THE TRUTH’: ROYAL EXPERTConversely, Cobb said, the Duke and Duchess of Sussex are very PDA-heavy. Even from the beginning of their relationship and when they were senior royals, they "broke the rules" regarding PDA, Cobb said.

Scott Hall is a two-time WWE Hall of Famer who is known for being the founding member of the New World Order.

In November the 2022 FIFA Men's World Cup opens in Qatar, a country that represses the rights of lesbian, gay, bisexual, and transgender

WWE Hall of Famer Scott Hall, a key figure in pro wrestling's massive growth in the 1980s and '90s, has died, WWE said Monday. Hall, 63, was

The FIFA World Cup from November 20 to December 18, 2022, will be played following years of serious migrant labor and human rights abuses in

The wrestling world lost one of the best of the bad with the passing of Two-Time WWE Hall of Famer Scott Hall, a.k.a. Razor Ramon.

A huge FIFA 23 leak on PS5 has revealed the World Cup mode that is but it has now leaked, with several players finding themselves able

FIFA president Gianni Infantino has said that the bids made for the 2023 FIFA Women's World Cup broadcast rights are “unacceptable”.