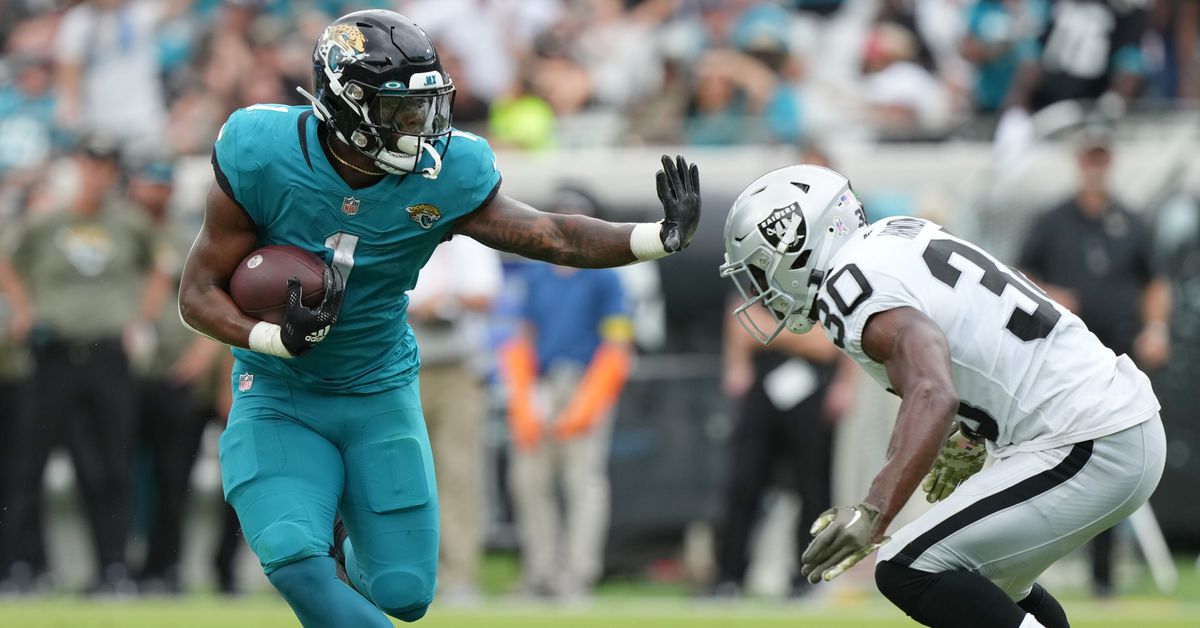 The Jacksonville Jaguars hosted the Las Vegas Raiders for a Sunday afternoon contest, and came back from a 17-point deficit to the get a 27-20 victory. The win also ended a five-game losing streak for Jacksonville.

On Jacksonville’s first possession, the Jaguars drove deep into Las Vegas’ territory at the 26-yard line, but disaster would strike. Quarterback Trevor Lawrence tried to pitch the ball to running back JaMycal Hasty, but Hasty couldn’t secure the ball. The loose ball was recovered by defensive end Maxx Crosby, giving possession back to the Raiders.

Las Vegas would capitalize off of the turnover, driving 71 yards in 10 plays. It was a heavy dose of Carr to wide receiver Davante Adams, as the pair connected six times, including for a 25-yard touchdown. The Raiders took an early 7-0 lead in the first quarter.

The Jaguars proceeded to go three-and-out on the ensuing possession and punted the football away. The Raiders took over at their own 45-yard line and drove into Jacksonville’s territory.

However, the drive eventually stalled and Las Vegas settled for a 38-yard field goal from kicker Daniel Carlson. The Raiders led 10-0 early in the second quarter.

The Jaguars responded by once again going three-and-out and punting the ball back to the Raiders. Las Vegas made quick work of its next drive, marching 69 yards in just three plays.

Carr found Adams once again, this time for a 38-yard touchdown strike. Jaguars safety Andre Cisco slipped on the play, leaving Adams wide open in the end zone. The Raiders took a commanding 17-0 lead with 10:51 remaining in the second quarter.

All aboard the Tae train

The Jaguars refused to go away, though. Jacksonville answered with a 10-play, 75-yard drive. Running back Travis Etienne Jr. capped off the possession with a one-yard touchdown plunge.

Jacksonville was able to cut into Las Vegas’ lead, making the score 17-7, with 4:50 remaining before halftime.

The Raiders went on to add another 38-yard field goal from Carlson on the next possession. Las Vegas extended its lead to 20-7 with just 45 seconds left before the break.

This would be enough time for Lawrence to lead his team down the field and add to Jacksonville’s score, however. Lawrence had a 24-yard rush on the possession.

Kicker Riley Patterson knocked through a 44-yard field goal for the Jaguars as time expired in the first half, and the Raiders led 20-10 at halftime.

The Jaguars took advantage of the great field position. Jacksonville drove 45 yards in nine plays before finding the end zone. Lawrence threw a seven-yard touchdown pass to wide receiver Christian Kirk. All of a sudden, the Raiders led by just three points at 20-17.

That’s how you kick off the second half!#LVvsJAX on CBS pic.twitter.com/QkTAcvK9Cl— Jacksonville Jaguars (@Jaguars) November 6, 2022

Later in the game, after forcing Las Vegas to punt, the Jaguars would find pay-dirt once again.

Etienne put the exclamation on a 12-play, 82-yard drive (that took 7:06 off of of the clock) with his second touchdown of the game. Jacksonville took its first lead of the game at 24-20 with 14:56 remaining in the fourth quarter.

After that, the teams traded a few punts before things got a little dicey for the Jaguars. Jacksonville took possession of the ball with 6:19 remaining and marched into Raiders’ territory, but it didn’t end how the Jaguars wanted.

After taking 3:16 off of the clock, the Jaguars sent Patterson out for a 41-yard field goal attempt on fourth-and-1. Patterson missed the kick, giving the Raiders the ball — and some life — with 3:03 still to play.

However, the Jaguars came up big defensively. Jacksonville forced a turnover on downs in four-straight plays and got the ball back at Las Vegas’ 39-yard line with 2:25 on the clock.

Las Vegas would hold defensively, forcing another Patterson field goal attempt. This time, however, Patterson’s kick was good from 48 yards out. The Jaguars led 27-20 with just 1:03 left to play.

The Raiders had a chance to tie the game, but could not come close to reaching the end zone. The Jaguars earned the 27-20 victory.

Jacksonville out-gained Las Vegas in total yardage 403-321. Lawrence completed 25 of 31 (80.6 percent) of his passes for 235 yards and a touchdown, adding 53 rushing yards. Etienne became the first 100-yard rusher the Raiders have allowed this year, carrying the ball 28 times for 109 yards (3.9 yards per carry) and two touchdowns. Kirk recorded eight catches for 76 yards and a touchdown.

The Jaguars travel to Kansas City next week to take on the Chiefs (5-2 prior to Kansas City’s Sunday night matchup with the Tennessee Titans). The game is scheduled to kick off at 1 p.m. Eastern Time and will be broadcast on CBS in local markets.

1 day ago Taste of Country

The eruption began about 11:30 p.m. Sunday in Moku‘āweoweo, the summit caldera of Mauna Loa, inside Hawai‘i Volcanoes National Park. Residents at risk from Mauna Loa lava flows should review preparedness and refer to Hawai‘i County Civil Defense information for further guidance. If the eruption remains in Moku‘āweoweo (the summit caldera), lava flows will most likely be confined within the caldera walls. (Image is from Mauna Loa summit webcam at 11:46 PM HST — Mauna Loa webcams are at https://www.usgs.gov/volcanoes/mauna-loa/webcams.) Mauna Loa summit, cabins and high-elevation areas have been closed for weeks due to increased seismicity.

Every Christmas without fail, we went up to stay with my aunt in Cumbria for a few days. She had a beautiful house and garden and nature was important to her, as it is to me. What I remember most is the scent: the whole house would be filled with the fragrance of forced hyacinths and paperwhite narcissi. She was called Fortune Stanley and she wrote a cookbook in the 1970s called English Country House Cooking. EXPLORE THE ENGLISH COUNTRY GARDEN WITH SARAH RAVEN AND CLToday, all our decorations are based on nature and the garden, with plenty of candles and fairy lights.

After controlling a game against the Oregon State Beavers the Florida Gators (4-2) will look to end their PK85 experience on a high note taking on the West Virginia Mountaineers (5-1). West Virginia is in year 16 of the Bob Huggins era and his style of tough nosed, no-nonsense, defense-first basketball has become synonymous with the Mountaineer brand. Florida has had some luck against West Virginia recently taking a 4-game win streak into Sunday’s matchup with three of those games happening in the last five years with the Gators taking wins in each of them despite the fact that West Virginia was often favored. West Virginia is led offensively by Erik Stevenson who might sound familiar as he was in the SEC a year ago playing for South Carolina. Florida and West Virginia at the PK85 will take place on Sunday, November 27th at 8:30 ET and will be televised on ESPN U.

Black Friday not your cup of tea? 3 tips on shopping small

Kevin Durant led the Nets with 35 points, and O’Neale had 11 points, 11 rebounds and 11 assists. Yuta Watanabe added 20 points off the bench and Ben Simmons scored a season-high 15 points before fouling out with 24 seconds left. From there we were in scramble mode.”A 3-pointer by Watanabe gave the Nets an 85-82 lead heading into the fourth quarter. That train is: playing hard, playing together, being a team and that’s going to continue. And that’s going to be up to me to get our group to incorporate everybody.”UP NEXTNets: Host Memphis on Sunday night.

The Jacksonville Jaguars hosted the Las Vegas Raiders for a Sunday afternoon contest, and came back from a 17-point deficit to the get a

A new identity: The Boilermakers come back from a 9-point deficit off

A new identity: The Boilermakers come back from a 9-point deficit off the back of Braden Smith. BY ROCKET HAVERLAND Staff Reporter; Nov 16, 2022

The Las Vegas Raiders played Jacksonville Jaguars on Sunday and what happened? Another embarrassing, blown loss as they dropped a 27-20 game

Final Score: Chiefs come back to defeat Chargers 27-24 on

Final Score: Chiefs come back to defeat Chargers 27-24 on Thursday Night Football. Two of the AFC West's top teams had a big a showdown.

FINAL: Jaguars win 27-20. Jaguars improve to 3-6, while Raiders fall to 2-6. Watch the Silver and Black live when you get your Raiders tickets

The Las Vegas Raiders aren't ready for prime time. Not after blowing a 17-0 lead to lose to the Kansas City Chiefs 30-29, three weeks after

Midway through the third quarter, the Raiders still lead 20-17 against the Jaguars. The Raiders are -180 on the live line (Jaguars +150),