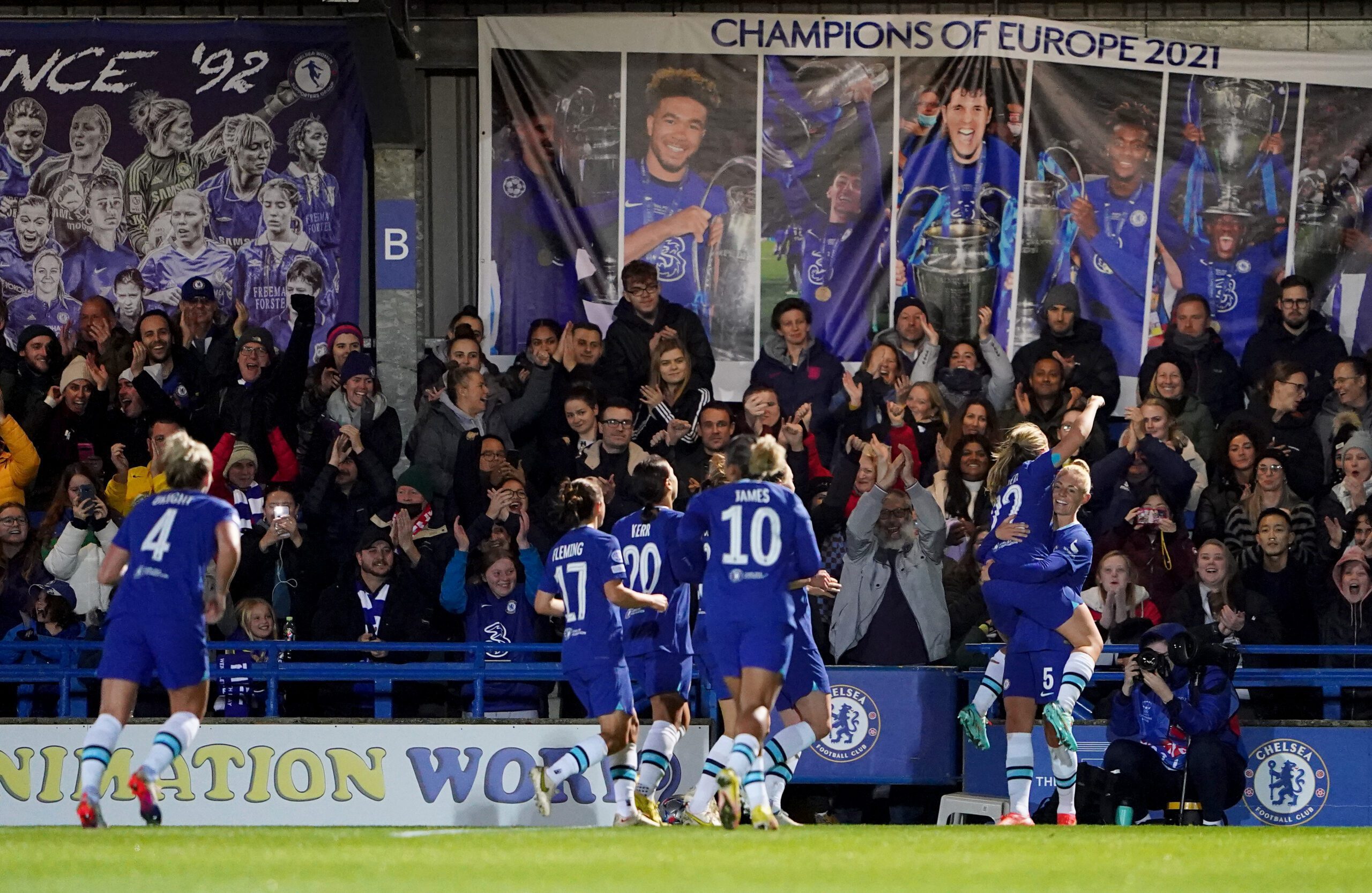 By Paul Lagan at Kingsmeadow

Sophie Ingle and Erin Cuthbert scored the goals that gave below par Chelsea three vital Champions League points against Real Madrid at Kingsmeadow tonight, that puts them five points clear at the top of Group A.

Real Madrid will have to show greater urgency and attacking prowess in the return leg in two weeks’ time if they are going to have a chance of overhauling the west Londoners.

The Spanish side are level with PSG on four points for the second spot, with the French outfit coming to Stamford Bridge on December 22.

Quite why the Blues were lacking in a high tempo is difficult to assess, but they did enough – just to deserve the victory.

Guro Reiten almost opened the scoring on three minutes, but her curling right-footer was no trouble for Madrid goalkeeper Misa Rodriguez.

The home side dominated posession without creating too many gilt-edged chances.

The visitors were content to defend deep, and attack when the chance arose and the first half petered out.

There were no changes by either side at half-time.

The tempo of the game remained the same – slow and it was no surprise that on 56 minutes head coach Emma Hayes replaced Fran Kirby and Johanna Rytting Kaneryd – on came Jessie Flemingad Lauren James.

Ten minutes later and the Blues took the lead. An Erin Cuthbert corner was glanced on by Millie Bright at the  near post and Sophie Ingle was on hand at the far post to tuck home and break the dogged resistance of the Spanish side.

With 15 minutes left on the clock, Cuthbert found herself attacking the right byline area. She attempted a cross but went one better by sailing her right-footed effort over Rodriguez in goal and watched the ball nestle the back of the net.

Reiten’s time was then up, with Jess Carter replacing her.

A clear indication that Hayes was content to strengthen the defence and hold the visitors back.

That game management proved to be successful.

Former Housing Secretary Robert Jenrick has encouraged everyone in the country who can afford to do so to buy a newspaper, and told the Downing Street press briefing: “A free country needs a free press, and the newspapers of our country are under significant financial pressure”.

So if you have enjoyed reading this story, and if you can afford to do so, we would be so grateful if you can buy our newspaper or make a donation, which will allow us to continue to bring stories like this one to you both in print and online.

Everyone at the South London Press thanks you for your continued support.

WASHINGTON — Democratic Sen. Kyrsten Sinema of Arizona announced Friday that she has registered as an independent, but she does not plan to caucus with Republicans, ensuring Democrats will retain their narrow majority in the Senate. She is expected to maintain her committee assignments through the Democratic majority, according to a Senate Democratic aide. Sinema’s most prominent potential primary challenger is Rep. Ruben Gallego, who has a long history of feuding with Sinema. While that rebuke was symbolic, it came only a few years since Sinema was heralded for bringing the Arizona Senate seat back into the Democratic fold for the first time in a generation. The move also previewed the persistent opposition that Sinema was likely face within her own party in 2024.

4 hours ago The Portland Press Herald

Dec. 8, 2022 – Following an incredible presentation at The Game Awards, thatgamecompany has opened the virtual doors for their Sky: Children of the Light in-game concert featuring award-winning Norwegian musician, AURORA. The new trailer released at The Game Awards can be viewed here. The concert connects over 4,000 players together on the same screen, in the world’s largest virtual concert venue for a shared emotional musical journey. The beautifully-animated Sky: Children of the Light has generated more than 160 million downloads across the App Store, Google Play, Nintendo Switch and PlayStation. About thatgamecompanythatgamecompany is committed to developing broadly accessible, artistic, emotional, and enriching experiences—including award-winning titles flOw, Flower, Journey, and Sky: Children of the Light.

A Get Help agent contacts the Apple Watch wearer and remains on the line until the watch wearer feels safe. The Care Smart app is compatible with Apple Watch Series 4 and later, Apple Watch Ultra, and Apple Watch SE, running watch OS 9. “Viiz is both proud and excited to be working with Verizon”, said Elise Bellick, Viiz Vice President of Sales. The company’s call center expertise and capabilities are enriched by an active research and development team that innovates and evolves platforms supporting a full range of traditional and leading-edge service center scenarios. All Viiz emergency call agents are Association of Public-Safety Communications Officials (APCO) Certified, and its call center operations meet or exceed National Emergency Number Association (NENA) standards for call answering.

Simone Fontecchio dunked with 1.4 seconds remaining off Nickeil Alexander-Walker’s steal and the Utah Jazz beat the Golden State Warriors 124-123 on Wednesday night in a matchup of short-handed teams. Stephen Curry, Draymond Green and Andrew Wiggins sat out for Golden State, while Utah was missing Lauri Markkanen and Mike Conley. Jordan Poole tied a season high with 36 points for Golden State and Jonathan Kuminga had a season-high 24. We were neither of those things the last 13 seconds,” Golden State coach Steve Kerr said. … Golden State scored 20 points off 17 Utah turnovers.

1 day ago The Press Democrat

San Diego Community College District Chancellor Carlos O. Cortez hosted a forum on campus on Nov. 16 where he and several members of the chancellor’s cabinet addressed district plans for the 2022-23 academic year. Chancellor Cortez noted basic skills and remedial education have been cut drastically in the last couple of years which has significantly contributed to their challenges with enrollment management. At first, the goal was to get students in the front door but Chancellor Cortez described it as having shifted to completion. Chancellor Cortez expressed great confidence in the strides that will be taken to capture the full 30%. Chancellor Cortez pointed out that the campus life here at Mesa College makes it particularly special.

1 day ago The Mesa Press

has revealed the budget products hit the worst by inflation at UK supermarkets like Tesco and Sainsbury's as the cost of living soars. The consumer group reported that the prices of supermarket own brands and budget products have increased more than premium or branded goods. 5 ways to save on your weekly food shopAldi, Lidl, Asda and more own brand budget prices soar as cost of living soarsWhich? Tesco's Creamfields Soft Cheese (200g) and Sainsbury’s Simply Muesli (1kg) were the biggest year-on-year prices of supermarket budget food and drink for the quarter ending October 31. The worst supermarkets for overall inflation on their food and drink were also revealed by Which?.

Chelsea maintained their 100 per cent start to their Women's Champions League campaign by beating Real Madrid 2-0 at Kingsmeadow.

Real Madrid vs Chelsea: Holders crash out of Champions League

Real Madrid vs Chelsea: Holders crash out of Champions League despite 3-2 win. April 12, 2022.

Chelsea will welcome Real Madrid to Kingsmeadow on matchday three of the UEFA Women's Champions League on Wednesday (November 23).