Elevated prices for food, rent, gasoline and other household costs have taken a toll on shoppers. As a result, many are reluctant to spend unless there is a big sale and are being more selective with what they will buy — in many cases, trading down to cheaper stuff and less expensive stores.

Shoppers are also dipping more into their savings, turning increasingly to “buy now, pay later” services like Afterpay that allow users to pay for items in installments, as well as running up their credit cards at a time when the Federal Reserve is hiking rates to cool the U.S. economy.

Such financial hardships could help drive shoppers to look for bargains.

Isela Dalencia, who was shopping for household essentials like detergent at a Walmart in Secaucus, New Jersey, earlier this week, said she’s delaying buying holiday gifts until Cyber Monday — the Monday after Thanksgiving — when online sales rev up. Then, she will wait again until the week before Christmas to get the best deals, unlike last year when she started buying before Black Friday.

“I am shopping less,” Dalencia said, noting she will spend about $700 for holiday gifts this year, one-third less than last year.

Katie Leach, a social worker in Manhattan, was also browsing the aisles at Walmart but said she will start holiday shopping during the first week of December as usual. This time, however, she’ll be relying more on bargains, her credit card and “buy now, pay later” services to get her through the shopping season because of surging prices on food and other household expenses.

“The money is not going as far as last year,” Leach said. 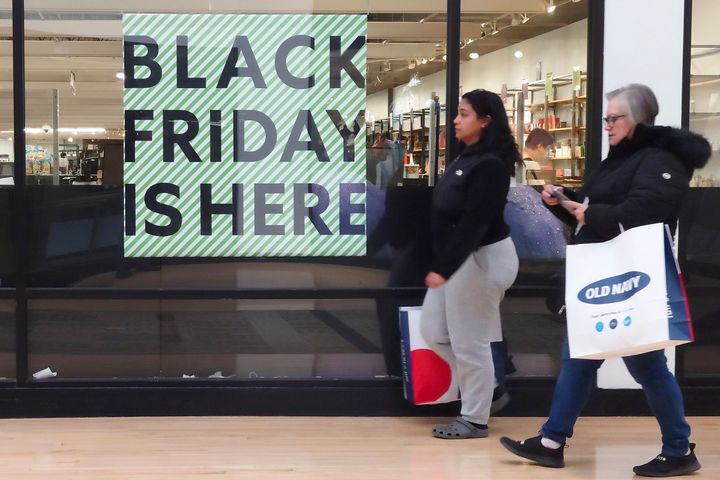 A "Black Friday" sign is posted at a retail location in Philadelphia, Monday, Nov. 21, 2022. Bargain hunting is back with full force heading into the holidays. But inflation is limiting how much of a deal consumers will be getting.

This year’s trends are a contrast from a year ago when consumers were buying early out of fear of not getting what they needed amid clogs in the supply network. Stores didn’t have to discount much because they were struggling to bring in items.

But some pandemic habits are sticking around. Many retailers that closed stores on Thanksgiving Day and instead pushed discounts on their websites to thin out crowds at stores are still holding onto those strategies, despite a return to normalcy.

Major retailers including Walmart and Target are again closing their stores on Thanksgiving. And many moved away from doorbusters, the deeply marked down items offered for a limited time that drew crowds. Instead, the discounted items are available throughout the month, on Black Friday or the holiday weekend.

Against today’s economic backdrop, the National Retail Federation — the largest retail trade group — expects holiday sales growth will slow to a range of 6% to 8%, from the blistering 13.5% growth of a year ago. However, these figures, which include online spending, aren’t adjusted for inflation so real spending could even be down from a year ago.

Adobe Analytics expects online sales to be up 2.5% from Nov. 1 through Dec. 31, a slowdown from last year’s 8.6% pace when shoppers were uncertain about returning to physical stores.

Analysts consider the five-day Black Friday weekend, which includes Cyber Monday, a key barometer of shoppers’ willingness to spend, particularly this year. The two-month period between Thanksgiving and Christmas represents about 20% of the retail industry’s annual sales.

Rap mogul Kanye West, who now goes by Ye, praised Adolf Hitler during an interview with Alex Jones that was too bizarre and potentially career-ending to be called a mere trainwreck. You may like Hitler, Kanye, but he would not have liked you. You have unleashed hate against Jews, amplifying some of the oldest antisemitic tropes - not a dog-whistle to anti-Jewish racists, more like a megaphone. He is echoing centuries-old antisemitic tropes, straight up praising murderous Hitler, and targeting millions of people all because he’s unhappy with his contracts. Trump" has been deleted after Kanye West appeared on InfoWars and praised Hitler pic.twitter.com/syUbYNfbv9 — Ryan Deto (@RyanDeto) December 1, 2022AdvertisementYe has reportedly been pro-Hitler for a while.

Colorado Springs Reckons With Past After Gay Club Shooting

COLORADO SPRINGS, Colo. (AP) — When officials unfurled a 25-foot rainbow flag in front of Colorado Springs City Hall this week, people gathered to mourn the victims of a mass shooting at a popular gay club couldn’t help but reflect on how such a display of support would have been unthinkable just days earlier. AdvertisementKebrina Chirdon lights candles at a memorial outside of Club Q on Friday, Nov. 25, 2022, in Colorado Springs, Colo. Residents take pride in describing Colorado Springs as a place defined by reinvention. “I have been thinking for years, we’re in the middle of a transition about what Colorado Springs is, who we are, and what we’ve become,” said Matt Mayberry, a historian at Colorado Springs Pioneers Museum. Still, he noted signs the city was more culturally conservative than others of similar size and much of Colorado: “Colorado Springs is kind of an outlier,” he said.

The head of the world soccer governing body FIFA in a bizarre speech on Saturday blamed Europe for triggering the controversy over human rights abuses in Qatar, this year’s World Cup host. Qatar was chosen in 2010 as the venue for the international sports event after a massive bribe scandal involving FIFA officials. FIFI head Gianni Infantino called out the “hypocrisy” of outraged Western nations issuing “moral” lessons, given their own past histories. He compared his own suffering to migrant workers and the LGBTQ community in Qatar, explaining he was “bullied” as a boy in Switzerland because he had red hair and freckles. Thousands of migrant workers have died in the last ten years in Qatar from the extreme heat and accidents building World Cup stadiums and related facilities.

Greg Abbott said Tuesday that his administration has started transporting migrants in his state to Philadelphia, the latest Democrat-led city affected by his plan to use desperate migrant families as political props. The first Texas bus of migrants has departed for Philadelphia. The Remain in Mexico policy required some migrants to await decisions on their U.S. asylum applications in Mexico. Biden ended the Remain in Mexico policy, and a federal judge blocked Title 42 on Tuesday. Abbott began his busing plan as a way to send a political message to Biden in response to growing numbers of border crossings.

Democratic nominee for U.S. Senate Sen. Raphael Warnock speaks during a news conference, on Nov. 10, 2022, in Atlanta. Dan Eberhart, a GOP donor, called Walker “damaged goods,” saying the contest has to be about who’s running Washington, not just a Georgia senator. From the start of his campaign, Warnock has distanced himself from Biden, at least in his campaign speeches and television advertising. Advertisement“The president will do whatever is helpful to Sen. Warnock, whether that’s campaigning with him, whether that’s raising money,” she said Thursday on CNN. “Whatever Sen. Warnock would like, the president will do.”But regardless of either candidate’s difficulty navigating his liabilities, one thing is certain: A full-scale national fight is underway.

Andy Taylor of Duran Duran performing in 2017 Debbie Hickey via Getty ImagesDuran Duran’s original guitarist Andy Taylor has shared his diagnosis with stage four prostate cancer. In a letter from Andy they read, the guitarist said: “Just over four years ago I was diagnosed with stage 4 metastatic prostate cancer. “I have the ‘Rodgers and Edwards’ of doctors and medical treatment that until very recently allowed me to just rock on. Advertisement“Although my current condition is not immediately life-threatening there is no cure.”Rodgers and Edwards refers to Nile Rodgers and Bernard Edwards, the pop producers and founders of Chic, who worked with Duran Duran throughout their career. Duran Duran formed in Birmingham in 1978 and were one of the biggest acts of the 1980s.

Inflation hovers over shoppers heading into Black Friday | The Gazette

He said that bestsellers from Macy's online sale, which started last issues and some of the gifts didn't arrive until after Christmas.

Elevated prices for food, rent, gasoline and other household costs have taken a toll on shoppers.

Black Friday crowds are bigger this year as shoppers hunt for deals. But holiday spending may be muted as consumers cope with inflation.

Shoppers walk the aisles of Walmart for Black Friday deals in Dunwoody, Georgia. Walmart opened at 6am on Black Friday for shoppers.

He said that bestsellers from Macy's online sale, which started last issues and some of the gifts didn't arrive until after Christmas.

records as shoppers bring forward pre-Christmas spending to avoid Harvey Norman, said on Sunday that the Black Friday sales at the

With inflation biting, shoppers line up to seek deals at Macy's in New shoppers lined up early this morning to snag deals — and to talk

Black Friday 2021: Shoppers are back in malls - The Washington Post