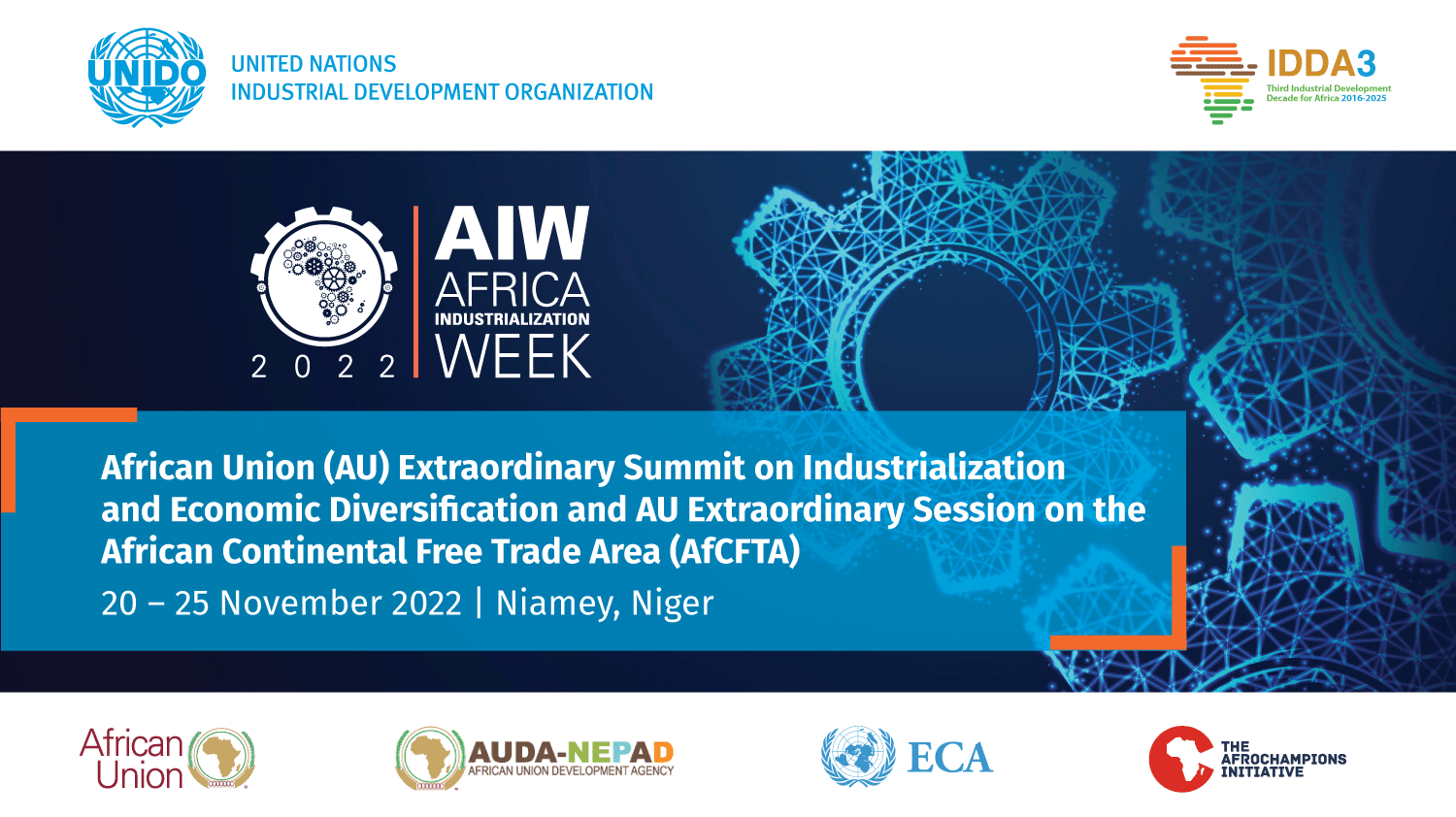 Africa has lagged in many areas in its development efforts. Despite being one of the most endowed continent with natural and human resources, majority of the continent’s growing populations are still wallowing in poverty – conditions that often could be changed by technological strides.

Africa holds more than 60 per cent of the world’s precious minerals and some countries on the continent have oil and gas, resources that if properly managed could have served as the catalyst for economic, social and industrial growth.

While African countries at different levels of economic or social development have made individual efforts at industrialization and trade, there is still a lot more required to be achieved to fully benefit from the economics of scale.

The Summits are being held in Niamey, Niger, from November 20 to 25, 2022, under the theme: “Industrializing Africa: Renewed Commitment towards Inclusive and Sustainable Industrialization and Economic Diversification”.

Ahead of the Summit, a number of statutory meetings related to the AU Assembly took place in early November, including meetings of senior officials and Ministers in charge of industrialization, economic diversification and the AfCFTA.

According to the organisers, the Summit aims to highlight Africa’s renewed determination and commitment to industrialization as one of the central pillars in attaining the continent’s economic growth and development goals as articulated in Agenda 2063 and Agenda 2030.

The organisers further note that in light of the key and strategic interdependencies between industrialization and the AfCFTA, the Summit would rally desired political momentum, resources, partnerships and alliances towards an Africa-Industrialization drive.

This, the organisers say is along the continent’s resolve to drive structural transformation, built around leveraging Africa’s rich and diverse natural resources, while at the same time embracing current advances in technologies, continental and global geo-socio-political trends and emergence of tradable services.

They also anticipate that the Summit would unlock the evolution of a vibrant Pan-African enterprise and capital base that will unleash an inclusive and sustainable industrialization pathway that carries along the participation of all economic agents, including SMEs, youth, and women in the generation of national wealth and creation of jobs as well as expansion of entrepreneurship opportunities for Africa’s populations.

Antonio Pedro, acting Executive Secretary of the Economic Commission for Africa (ECA) speaking at a side event on the theme “Harnessing the AfCFTA for Africa’s industrialization: Fostering competitiveness and sustainability in the digital era” stressed on it as an invitation to reflect on three key dimensions if Africa was to realise the full benefits of AfCFTA: Leveraging Green Financing and digitalisation for industrialisation and structural transformation of the

Citing the UN Conference of Parties on Climate Change (COP27) which ended with a decision to compensate for the losses and damages for vulnerable nations who have been severely affected by climate disasters, he said in spite of a challenging geopolitical environment, the parties delivered a package of resolutions that reaffirmed their commitment to keeping global temperature increases to 1.5°C above pre-industrial levels.

“The package also boosted the financial, technological, and capacity-building assistance that developing nations need to reduce their emissions of greenhouse gases and adapt to the inevitable effects of climate change. Additional contributions totalling more than $230 million were made to the Adaptation Fund,” he said.

He said the decisions arrived at open a window of opportunity for countries like Niger and many others in the continent that are severely impacted by the devastating effects of climate change without taking any part in generating them.

Pedro urged African countries to critically think on how they can leverage on the momentum generated at COP27 to access stable and predictable financing for structural transformation of the economies on the continent.

He argued that a promising vehicle to sustainable industrialisation is digitalisation.

ATEX was repurposed to assist African countries to deal with shortages of food, fuel, and fertilizer many Africans are experiencing due to the Ukraine crisis. By pooling Africa’s Demand, ATEX ensures stronger market power, facilitate pool procurement, and hence provide one point of competitive access to critical supplies. The ATEX is a clear demonstration of how regional trade can help channelling critical commodities where it is needed most in Africa,” he said.

He further indicated that the ECA is gathering and analysing data related to the regulatory regime governing digital trade on the Continent.

According to him, the significance of the AfCFTA in the pursuit of Africa’s Industrialisation Agenda made African countries tag industrialisation as the core of the CFTA project. Industrialisation has been seen by The African Union’s Regional Economic Communities (RECs) to play a critical role in regional integration and development Agendas.

“Intra-regional trade has particular potential to facilitate increased economies of scale, diversification and value addition. A major objective of AfCFTA is to foster competitiveness at the industry and enterprise levels via exploitation of opportunities for scale production, improved market access and efficiency in resource allocation.

For the realization of the AfCFTA objectives, African countries would need to articulate effective policies, strategies and programmes as well as concrete action plans for trade promotion and export by identifying new opportunities for diversification, industrialization and value chains development,” he said.

At the meeting of the Executive Council at the Summit, Pedro stated that The AfCFTA is a critical tool to support this transition.

“It provides the continent with a blueprint for a faster and effective industrialization, by putting in place necessary conditions for transformational investment, diversification and sustainable development in Africa. Industrialization is not an option for our continent; it is indeed an imperative. Simply put, by adding value to Africa’s natural and mineral resources here on the continent, we can turn the persistent bane of our resources into a persistent boon,” he said.

Speaking at a side event on financing SMEs, Ahmadou Abdoulaye Diallo, the Director-General of African Solidarity Foundation cited the impacts of COVID-19 on Africa, and urged African countries to work together in unison to respond to the effects of the pandemic, as well as the economic and food crises facing the continent.

“We can respond appropriately if we work together in unison,” he said.

He also called for increased financing for SMEs in Africa to enable them fulfil their role in actualizing the AfCFTA, noting that the growth of SMEs is conditioned by their access to finance.

“SMEs are contributors to employment and GDP growth. They contribute to gender balance and they are vectors of wealth distribution, but their effectiveness is limited by the challenges they face, which is access to finance,” he said.

The African Union Commissioner for Trade and Industry, Albert Muchanga said the AU as a partner of governments and Regional Coordination Communities is working with a strategy for Africa’s industrialization process.

Acknowledging that finance is always in short supply, he called on African countries to ensure that people have access to finance, and urged SMEs to they make good use of finance and pay back in time and in full.

“SMEs should graduate into big businesses and the conditions must be created for that,” he said.

Industrialization and the AfCFTA hold potential for transforming African societies and economies, and African countries must put their shoulders to the wheel and work towards the full realization of these targets.

Copyright ©2022 by NewsBridge Africa
All rights reserved. This article or any portion thereof may not be reproduced or used in any manner whatsoever without the express written permission of the publisher except for the use of brief quotations in reviews.

35 minutes ago The Mercury News

Whoever says the full-length album is a dying art form hasn’t been watching the Christmas music. Here’s my take on this year’s albums vying for your Christmas music dollars. ‘Merry Christmas, Love’Joss StoneA Christmas album seems like a natural vehicle for Stone, but her soulful, bluesy sound doesn’t often materialize. The jazz great holiday singles are for the first time collected here to make for a timeless, cheery holiday album. The playing shines on the bluegrass/gospel group’s collection of Christmas classics and a few original tunes.

1 hour ago Greensboro News and Record

The party has fielded its candidate on all 182 assembly seats and carried out a high-decibel campaign in the run-up to the polls to breach the BJP's Gujarat bastion. Already recognised as the state party in Delhi, Punjab and Goa, the AAP is just a state away from earning national party status. "The AAP is hoping to win more seats than what has been projected by the exit polls and political analysts. Poll results will prove all the exit polls wrong on December 8," AAP Gujarat unit's chief spokesperson Yogesh Jadvani asserted when asked for his comment. The party gained ground in the BJP-ruled Gujarat after it won 27 seats in the 2021 Surat Municipal Corporation elections.

Davila last month ordered Holmes to serve 11 1/4 years in prison. As he did with Holmes, the judge said he’ll decide later how much restitution Balwani must pay. Balwani, 57, chose to remain silent rather than make a statement to the judge before he was sentenced. While Holmes was acquitted of charges she defrauded patients, Balwani was convicted on those counts. Balwani had “significant autonomy in running the lab” at Theranos, prosecutor Jeffrey Schenk told the judge at Wednesday’s hearing.

1. Increased efficiency The good thing about a free trade area is that it encourages competition, which consequently increases a country's

Making the Most of the African Continental Free Trade Area

This report builds on that earlier study by including potential gains arising from greater flows of foreign direct investment (FDI), termed the

Disadvantages of the free trade area · Reduced income. Member countries can no longer earn revenue from tariffs. · Threats to intellectual

However, efforts to harmonise policy and enhance trans-border through, in particular, the African Continental Free Trade Area would make the

(PDF) How important is a regional free trade area for Southern Africa?

What is the African Super League? All you need to know - Goal.com

The continental lithosphere consists of the continental crust and, typically, some nonconvecting part of the underlying upper mantle (Figure

Britain and New Zealand have signed a free trade deal, which the UK government said would boost bilateral trade by 60% by eliminating