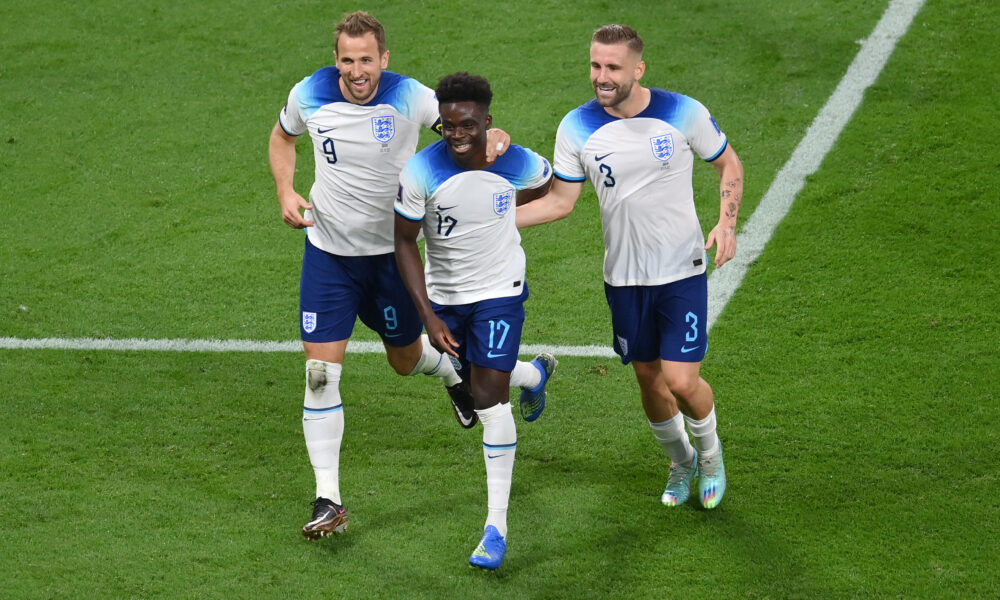 Gareth Southgate could not have hoped for a better start to the Qatar showpiece following his side’s sub-par form in the 2022/23 UEFA Nations League season.

Inspired by Bukayo Saka’s goals on either side of half-time, England convincingly outplayed Asian minnows Iran 6-2 in their opening Group B game that saw almost half an hour of injury time.

The six goals the Three Lions put past the Iranians on Monday came as a massive surprise, considering they accumulated a mere four in six Nations League outings in the lead-up to the tournament (D3, L3).

However, England’s best-ever result to open a World Cup and their second-highest all-time triumph at the tournament may have laid the foundation for the first taste of world football glory since 1966.

Nominal visitors in this fixture, the US, will be looking to undermine their rivals’ hopes of launching a morale-boosting winning streak as they hope to recover from a stomach-wrenching 1-1 draw against Wales.

Timothy Weah’s top-class finish handed Gregg Berhalter’s side a 1-0 half-time lead in their group stage curtain-raiser, but a defensive-minded second-half set-up backfired on the 49-year-old manager.

Gareth Bale drew a penalty which he subsequently slotted home to steal two points from under the USMNT’s noses and make their life in Group B infinitely more unattainable.

After progressing into the World Cup knockouts in their last two appearances at the tournament, the US had high hopes heading into the 2022 edition.

But the enthusiasm has been doused early on, forcing the youngest squad in Qatar to play against the odds against England to keep their progression bid alive.

After the demolition of Iran, England could win their opening two matches at the World Cup for a fourth time, last doing so in 2018 when the matchday-two triumph yielded a 6-1 humbling of Panama.

But Southgate must take care of his side’s proneness to conceding beyond the half-hour mark, which has been the case in their last four matches, including Mehdi Taremi’s double on Monday.

When you see England scoring six times, Harry Kane must be the first name to spring to mind, yet the Tottenham Hotspur skipper wasn’t on the scoresheet against the Iranians.

The Three Lions faithful will hope the marquee striker can get off the mark on Friday.

Wales made the USMNT pay for abandoning their attacking-minded football in the second half, extending their catastrophic streak without a clean sheet to 18 World Cup matches against European sides.

That’s the least of Berhaler’s problems, with his side entering the clash against a rampant England side on the back of four winless games (D3, L1).

The US at least lived up to their entertainers’ tag, as none of their 34 all-time World Cup fixtures have ended goalless, accounting for an unprecedented milestone in the tournament’s history.

Though the five-game H2H stakes heavily favour England (W4, D1), the Three Lions would be silly to let that tuck them into a false sense of security.

While the solitary stalemate in that five-game run was a 1-1 draw in the 2010 World Cup in South Africa, England found themselves on the receiving end of a 1-0 scoreline in their first-ever World Cup H2H in 1950.

That may seem like ancient history, yet it should still implant the idea of revenge into the heads of Southgate’s players.

The US showed moments of brilliant football against Wales, especially in the first half, but they seemingly ran out of steam beyond half-time, which could be a problem against England.

Southgate’s men possess much more quality in their ranks than their fellow United Kingdom rivals and know how to punish every lapse of concentration.

Therefore, we expect the Three Lions to finish the job as far as progression into the knockout rounds is concerned here and now.

You can watch all 2022 World Cup games live online from anywhere courtesy of Private Internet Access, a world-class VPN that provides a legal solution by connecting to their United Kingdom streaming servers and watching it for free on BBC iPlayer or ITV Hub.

Football Today readers can get a massive 82% off a subscription, which means it will cost you as low as $2.19 per month!

Controversy's favourite child Kanye West has praised Hitler and said he “loves Nazis”, prompting top Republican leaders to take down a tweet in support of the rapper and distance themselves from him. Kanye West: "I love Jewish people, but I also love Nazis." Kanye West on Alex Jones: "I see good things about Hitler .... Every human being has something of value that they brought to the table, especially Hitler." @RJC Condemns Today's InfoWars, Kanye West AntisemitismToday’s InfoWars show ft Alex Jones, Nick Fuentes & Kanye West - a disgusting triumvirate of conspiracy theorists, Holocaust deniers & antisemites - was a horrific cesspool of dangerous, bigoted Jew hatred. READ | Kanye West and Kim Kardashian reach a divorce settlement--- ENDS ---

25 Ohio State in ACC/Big Ten ChallengeDURHAM, N.C. (AP) — Jon Scheyer knew it would take time for a Duke team with 11 new players to learn each other and how to close out games. 25 Ohio State 81-72 on Wednesday night in the final ACC/Big Ten Challenge, a solid bounceback performance after a loss to No. But Duke managed just two points off those miscues after halftime as Ohio State pushed back. “I just did not think our decision-making was what it needed to be,” Ohio State coach Chris Holtmann said. Duke: The Blue Devils host Boston College on Saturday in Scheyer's ACC debut.

‘Christmas in Rockefeller Center’ live updates: See all the performances and best moments

Ho, ho, ho! It’s the holidays and what better way to kick off the season than with the annual lighting of New York’s very own Rockefeller Center Christmas tree? With more than 50,000 multi-colored LED bulbs strung on this year’s tree, it promises to be the most, ahem, illuminating spectacle of the season. Along with keeping you up to date on all of the night’s events, we’ve also got the story behind this year’s massive Norway spruce, the fascinating history behind the Rockefeller Center Christmas tree, and everything else you want to know about this iconic celebration. In the meantime, grab a cup of cocoa (marshmallows on top, please) and get ready for an evening of performances sure to have you singing Christmas carols and trimming the tree right along with us.

Real Madrid have adapted to the new times. As the Premier League finances continue to grow, in particular as the richest owners continue to spend, Real Madrid can no longer extract whomever they want and offer the highest wages. As Real Madrid weigh up whether to look for a back-up or replacement for Karim Benzema, who has struggled with injury this season, Rashford might represent a nice halfway house. Ultimately, Manchester United’s option to extend his deal seems most likely to scupper any Real Madrid hopes of bringing him to the club. Rashford fits the bill for Florentino Perez, the question would then be whether Real Madrid can offer Rashford what he is looking for at an important stage in his career.

Australia joined France in the knockout stages of the World Cup with a memorable 1-0 victory over Denmark. Heading into the final set of group stage fixtures, France had already guaranteed their progression and were almost certain to claim first place. In contrast, Australia began the day in second place. The win kept Australia in second place in the group, setting up a clash with the winner of Group C in the round of 16. As for Tunisia, the win wasn’t enough to take them into the top two.

Tornadoes hit Mississippi, central Louisiana; 125M in Midwest, Northeast in path of severe windsShow Caption Hide Caption Northwest Gulf Coast, Mississippi Valley under sever weather risk A potent storm will bring severe weather ranging from high winds to a few tornadoes from the northwestern Gulf Coast to the Mississippi Valley. Tornado watches were in effect in large swaths of Louisiana and Mississippi, where the National Weather Service warned of “a particularly dangerous situation.”“Parameters appear favorable for strong and long-tracked tornadoes this afternoon and early evening,” the weather service said, emphasizing northeast Louisiana and central Mississippi. The National Weather Service confirmed that tornados hit the ground in Mississippi on Tuesday evening and Alabama was in the forecast path of the storms during the overnight hours. The National Weather Service warned that severe weather was likely Tuesday across a swath of the Mississippi Valley: Arkansas, Illinois, Kentucky, Louisiana, Mississippi, Missouri and Tennessee. The weather service confirmed damages in the southeast portion of the parish.

Billie Eilish gushes over relationship with The Neighbourhood's Jesse Rutherford: 'I'm really happy'Show Caption Hide Caption Billie Eilish responds to Ye after Instagram diss over Travis Scott After Billie Eilish recently stopped a performance to check on the health of a fan, Ye took to Instagram claiming she dissed Travis Scott. Cody Godwin and Callie Carmichael, USA TODAYBillie Eilish is happier than ever – and beau Jesse Rutherford may have something to do with it. “It's really cool, and I'm really excited and I'm really happy about it,” Eilish said. Eilish’s confirmation of her relationship with Rutherford follows months of speculation after the two were spotted out together on multiple occasions. Academy invites Billie Eilish, Ariana DeBose, Jamie Dornan, more as Oscar-voting membersBillie Eilish, Jesse Rutherford turn heads with affectionate outingEilish and Rutherford first sparked dating rumors in October when they were seen hanging out together in Los Angeles, as seen in photos published by TMZ.

They have met 11 times throughout all competitions, although England have merit in head-to-head matches. England vs United States: last head-to-

Italy vs England Live Stream: How to Watch, Team News, Head to

Italy take on England in the UEFA Nations League. Here we have how to watch, team news, head-to-head, odds, prediction and everything you

World Cup 2022: Wales vs. England head-to-head record With a place in the knockout stages up for grabs, Wales and England go head to head at

Australia vs England T20 head to head record: The SportsRush presents for you the Head to Head statistics for AUS vs ENG T20I.

Pakistan vs England head to head T20 record - The SportsRush

Pakistan vs England head to head T20 record: The SportsRush presents for you the Head to Head statistics for PAK vs ENG T20 World Cup final.

Manchester United vs Brighton live stream: How to watch, team

Manchester United vs Brighton live stream: How to watch, team news, head-to-head, odds, prediction and everything you need to know.

PAK vs ENG Head to Head, Playing XI, Preview, Where to Watch 7th

Pakistan vs England: Where to Watch, Head to Head, Preview, Playing XI, & Live Stream Details for the 7th T20I between Pakistan and England.