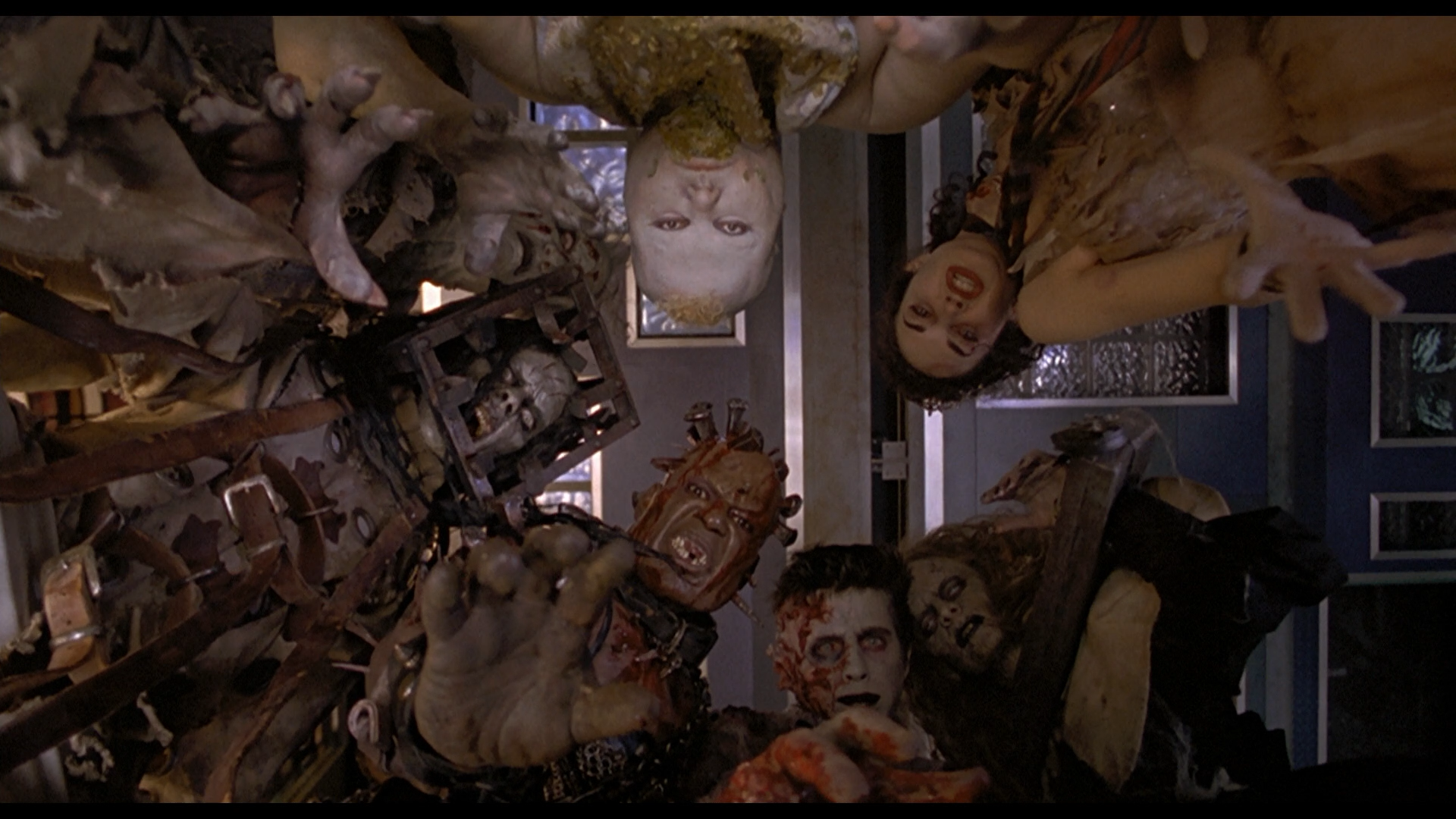 The big horror movie remake boom of the early 2000s was an interesting time in movie history. Classics like House on Haunted Hill, The Texas Chainsaw Massacre, and House of Wax all got the remake treatment and produced varying results in terms of profitability.

Director Steve Beck (Ghost Ship), with writers Neal Marshall Stevens (Hellraiser: Deader) and Richard D’Ovidio (Hypnotic), put their own spin on William Castle’s 1960 film 13 Ghosts, but it didn’t do so hot at the box office back in October 2001. Twenty-one years later, Thirteen Ghosts has gained a cult following of those who can appreciate the roster of titular spirits and high-quality production design.

Thirteen Ghosts begins with wealthy ghost hunter Cyrus Kriticos (F. Murray Abraham) and psychic Dennis Rafkin (Matthew Lillard) seeking out a violent ghost in a junkyard. One of the first things we see is a semi-truck spraying blood around to lure the ghost out, sparking a massacre that seemingly kills Cyrus and many of his employees.

Cyrus’s estranged nephew Arthur Kriticos (Tony Shalhoub), a financially unstable widower and single father, learns that his uncle died and left him an entire mansion. His two kids, Kathy (Shannon Elizabeth) and Bobby (Alec Roberts) are all about it. Along with their live-in nanny Maggie (Rah Digga), who they can somehow afford even though they’re already struggling to pay bills, the family head out to their new (maybe) home with Cyrus’ smarmy lawyer Ben Moss (J.R. Bourne).

When they arrive at the completely glass Hellraiser-like puzzle house, Dennis weasels his way in disguised as an electrician. While the Kriticos gang roams around the mansion in awe, he finds Cyrus’ collection of captured spirits in the basement. Each one has its own glass cell inscribed with Latin containment spells to keep them trapped. But the clueless lawyer unknowingly activates the giant machine (aka the house), releasing them one by one.

Obviously, the best part about Thirteen Ghosts is the ghosts. But designing a glass mansion with exposed clock-like machinery that runs on gears and cogs warrants some serious praise for Sean Hargreaves (Thor: Ragnarok), too. It’s totally giving off lament configuration vibes. Watching Dennis and the Kriticos family have to make their way through this frustrating, impossible-to-navigate labyrinth while taking turns swapping spectral glasses and dodging wandering ghosts makes me think the ghosts must be just as confused by the layout.

Kalina Oretzia (Embeth Davidtz), a ghost emancipator rather than catcher and former enemy of Cyrus, pops up out of nowhere to throw flares and give us a quick overview of the film’s mythology involving an ancient book, Hell, and the “Black Zodiac.”

But what about the thirteenth ghost? Well, it’s not revealed until later in the movie and I won’t spoil it for anyone who hasn’t seen it yet.

The spirits’ origins range from a rich girl strangled on prom night to an African American blacksmith who met a tragic Candyman-like demise that left him with a hammer in place of a hand. Most of them died violent deaths making them vengeful spirits out to kill anyone they could. The Jackal is chaos personified, truly a beast. But anyone who watched Thirteen Ghosts when they were going through puberty likely paid extra attention to the Angry Princess, aka the completely naked ghost covered in self-inflicted slashes all over her body.

Legendary industry pros Howard Berger (Werewolf by Night), Greg Nicotero (The Walking Dead), and Robert Kurtzman (The Haunting of Hill House) all worked behind the scenes to craft the prosthetic special effects, so it’s no surprise that the work is amazing. Like Mike Flanagan’s many masterful projects with tangible spectators, these ghosts were once people with their own backstories and personalities. Each character’s design itself tells a story, not so subtly showing the ways in which they died. Background details are glossed over in the actual movie but the Ghost Files bonus segment goes into each one.

These fully-realized ghosts deserve their own miniseries (and I nominate Mike Flanagan to write/direct). The Bound Woman actually reminds me a lot of the Bent-Neck Lady from The Haunting of Hill House, which makes sense since Kurtzman worked on both projects.

The scene-stealing Matthew Lillard has the most energy since Dennis is tasked with pleading with pessimistic nonbelievers to avoid putting everyone’s lives in danger. The other stand-out performances are Tony Shalhoub and F. Murray Abraham, although that might be because they’re given a lot more to work with than, say, Rah Digga. Her role as Maggie is reduced to the “hello no” nanny voice of reason, offering up a quippy “what the hell?” or “I don’t think so” at any moment. The film definitely lacks characterization and diversity.

Thirteen Ghosts is no longer a guilty pleasure but a horror movie I unapologetically enjoy watching. Yes, it’s schlocky with a clunky narrative, terrible ADR, and nonsensical editing. But for the early aughts, it’s an inventive film with top talent creating mind-blowing effects and designs. And honestly, I can’t think of a movie with a more iconic set of special features.

Thirteen Ghosts is available to rent on Prime Video (via an AMC+ subscription).

Raiders-Chargers: 8 things we learned from a big Las Vegas win

1 day ago Silver and Black Pride

For the Hawkeyes, that meant a trip to Nashville, Tennessee for a rematch with the Kentucky Wildcats in this year’s TransPerfect Music City Bowl. As such, there’s been much speculation the Penn State transfer may opt out of the Music City Bow to preserve his health and his draft capital. Iowa is one of nine Big Ten teams headed to a bowl game. The Big Ten will kick off bowl season on December 27th as Wisconsin faces Oklahoma State in the Guaranteed Rate Bowl. Iowa and Kentucky are set to kick off at 11am CT on December 31st in the Music City Bowl.

‘The Last of Us’ Trailer Breakdown

The first official trailer for HBO’s adaptation of The Last of Us dropped today at CCXP and was chock full of Easter Eggs and fresh faces. From familiar foes to brand-new characters created for the show, we’re breaking down some key moments from the first trailer for newcomers and game players alike. Two New CharactersHBO HBOWhile we know of at least one more made-for-series character, Melanie Lynskey’s Kathleen, only these two appeared in the trailer. FrankHBOThe excitement I felt seeing Frank get his own poster increased tenfold seeing him here in the trailer. However, the trailer has done well to alleviate my worries.

2 days ago Nerds and Beyond

Masked Ye takes the hood off in Alex Jones interview

Listen to this article hereOn Thursday, formerly Kanye West, Ye appeared on the right-winged conspiracy theorist Alex Jones’ InfoWars in his latest downward spiral that looks to only get worse by the day. he had alex jones stress laughing you know how crazy that is pic.twitter.com/nx8M4hzE5v — CNRAAD 🇲🇦🇸🇳 (@Iightworks) December 1, 2022“I see good things about Hitler,” Ye said before veering into Holocaust denialism. He later defiantly said Jewish people ‘are not going to tell him who to love.’“Every human being has something of value that they brought to the table, especially Hitler,” Ye furthered. He’s totally bad news.”Though Ye’s recent statements have caught many by surprise, others saw his fall off coming years ago. “I do love Hitler,” Ye said.

The #25 Iowa Hawkeyes (5-0) return to the court in Niceville, FL to face the TCU Horned Frogs (4-1) in the championship of the Emerald Coast Classic. TCU entered the season ranked 14th, not out of line where KenPom had them (16). Meager performances against Arkansas Pine-Bluff, Lamar, and Northwestern State (their only loss) saw their KenPom rating plummet and AP ranking follow suit. Below are a couple other thoughts, some additional details on TCU, and how to watch. TCU is a tough matchup, though, as they limit three point attempts and contest every shot.

What's your pick for underrated/hidden gem gba games? I think mine would be Sigma Star Saga, I really liked that game! don't know if it's

10 Forgotten N64 Cult Classics That Should Be Added To Nintendo

New indie found-footage horror ' A Town Full of Ghosts' is out today on DVD and On-Demand.

The 40 best cult movies of all time

Algorithms are the enemy of the cult film, so Netflix and its fellow streamers rarely spawn cult classics (though Bird Box, for one, has a shot)

The Best Hidden Gems and Underrated Movies on Prime Video

Found footage horror A Town Full of Ghosts gets a trailer, poster and

Found footage horror A Town Full of Ghosts gets a trailer, They plan to turn the ghost town into a tourist attraction with hotels,

10 Best Hidden Gem Horror Movies From 2022 To Watch This