Chelsea told to sign Harry Kane instead of Cristiano Ronaldo 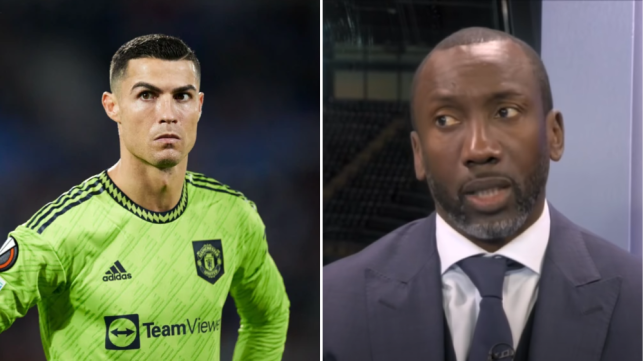 Portugal legend Ronaldo has been linked with a move to Stamford Bridge since his departure from Old Trafford was confirmed earlier this week.

Ronaldo largely impressed last season after completing a sensational return to Manchester United, but had slipped down the pecking order under new manager Erik ten Hag before he decided to hit out at his own club.

In an extraordinary interview with TalkTV host Piers Morgan, Ronaldo said he felt betrayed by Manchester United and admitted he did not respect Ten Hag.

The outburst marked the beginning of the end for Ronaldo at Old Trafford, with Manchester United confirming on Wednesday that his contract had been terminated with immediate effect.

Chelsea owner Todd Boehly expressed interest in signing Ronaldo last summer and has been tipped to revive his interest in the 37-year-old now he is a free agent.

Hasselbaink would have backed Chelsea’s move for Ronaldo a few months ago but no longer wants to see the five-time Ballon d’Or winner arrive at Stamford Bridge.

To view this video please enable JavaScript, and consider upgrading to a web browser that supports HTML5 video

Kane has scored 261 goals in 408 appearances for Spurs and 51 goals in 76 matches for England.

He told Grosvenor Casinos: ‘I would have done Ronaldo for Chelsea in the summer, for one year, but obviously now I think the priorities are bigger in the summer.

‘I would try to persuade Kane to come. That would be a very controversial move, but surely he’s going to want to win things. Surely he knows he’s not going to win with Spurs.

‘Surely, he’s not enjoying the way he is playing at the moment and where he’s playing. I know they’re all doing the shift for the team, but the majority of the time, when they don’t have the ball, he’s 10 meters away from his own box.

‘You know, so surely he’s not going to want to be playing like that for the next two or three years.

‘Surely he would want to be with the club that is going to go for it and is going to try to win trophies or are going to be closer to winning the trophies, so for me, they should go for him.’

‘I don’t think Ronaldo is a good move for Graham Potter at all,’ he told BoyleSports Football Betting. ‘Not so early in his Chelsea career to be dictated who comes in.

‘He obviously wants to have a full say on what happens at the club and that would send out the wrong message straight away.

‘Football surprises you every day and you don’t know what could happen next, so who knows?’

MORE : Adam Lallana claims Chelsea star would improve ‘every team in the world’

For more stories like this, check our sport page.

Peru president ‘hands himself in to police’ after coup attempt

A statement released today said the police are ‘following the rule of the law and not the president’. Congress officially voted to oust him for ‘permanent moral incapacity’ with 101 votes in favourHis vice president Dina Boluarte was appointed to lead in his place. Peru’s national ombudsman’s office said Mr Castillo’s attempts to avoid imepeachment had thrown Peru into midst of a constitutional collapse ‘that can’t be called anything but a coup’. Mr Castillo is currently facing investigation for six charges, namely profiting from public money. But the debate could not go ahead because Mr Castillo tried to close Congress.

He pledged to continue to provide support to Ukraine including providing 18 billion euros ($18.9 billion) of financial assistance for the coming year. “Ukraine needs our support and we are going to provide this support,” he said in an interview with Bloomberg TV. Ukraine Grapples With Power Deficit Amid Frosts, Ukrenergo Says (11:55 a.m.)Ukraine continues to experience a significant power deficit, national grid operator Urkenergo said on Telegram. Turkey’s Karpowership in Talks to Provide Power to Ukraine: AA (10 a.m.)Floating gas-fired power plants supplier Karpowership is in talks to provide electricity to Ukraine via Moldova and Romania, Turkish state-run Anadolu Agency cites Managing Director Zeynep Harezi as saying. The company plans to provide about 300MW to 400MW power to Ukraine from ships based in Moldova and Romania.

Here's a thing though: they have not reached the semi-finals at the World Cup since 2002 – the year they last lifted the trophy. AI evidence points to them having a 77.2 per cent chance of coming through against the Russia 2018 runners-up, who needed penalties to get past Japan. His first World Cup knockout stage goal came against Australia, relieving him on that millstone, but beyond their legendary captain questions remain. Can a team with Nicolas Otamendi at the heart of its defence really win a World Cup? Morocco, meanwhile, continue to fly the flag for Africa, one step away from being the continent's first World Cup semi-finalists.

Brazil stars Lucas Paqueta and Richarlison Credit: AlamyWest Ham’s Lucas Paqueta fired back at Roy Keane’s stinging criticism over Brazil’s dancing celebrations, stating what the Selecao intend to do next time they score. Vinicius Jr, Neymar, Richarlison and Lucas Paqueta were all on target. While working as a pundit for ITV, the notoriously no-nonsense Roy Keane was not amused. Keane has now come under fire from one of the scorers against South Korea – West Ham’s Lucas Paqueta. Paqueta hits back at Roy KeanePaqueta notched the fourth Brazilian goal and was made aware of Keane’s dismay in the post-match fall-out.

When Todd Boehly was presented with the chance to sign Cristiano Ronaldo for Chelsea, Thomas Tuchel never gave it any serious consideration. One

Chelsea have decided not to attempt to sign Cristiano Ronaldo from Manchester United in the summer transfer window, according to reports.

Cristiano Ronaldo 'better signing than Sterling' as Chelsea told to

Cristiano Ronaldo would be a better signing for Chelsea than Raheem Sterling, according to former Arsenal and Liverpool winger Jermaine

Harry Kane matched Cristiano Ronaldo's World Cup assists tally in just one match as England thrashed Iran 6-2. To the surprise of many,

Tuchel would prefer Chelsea to sign £45m striker over Ronaldo

All the latest news linking Manchester United superstar Cristiano Ronaldo with a move to Chelsea.