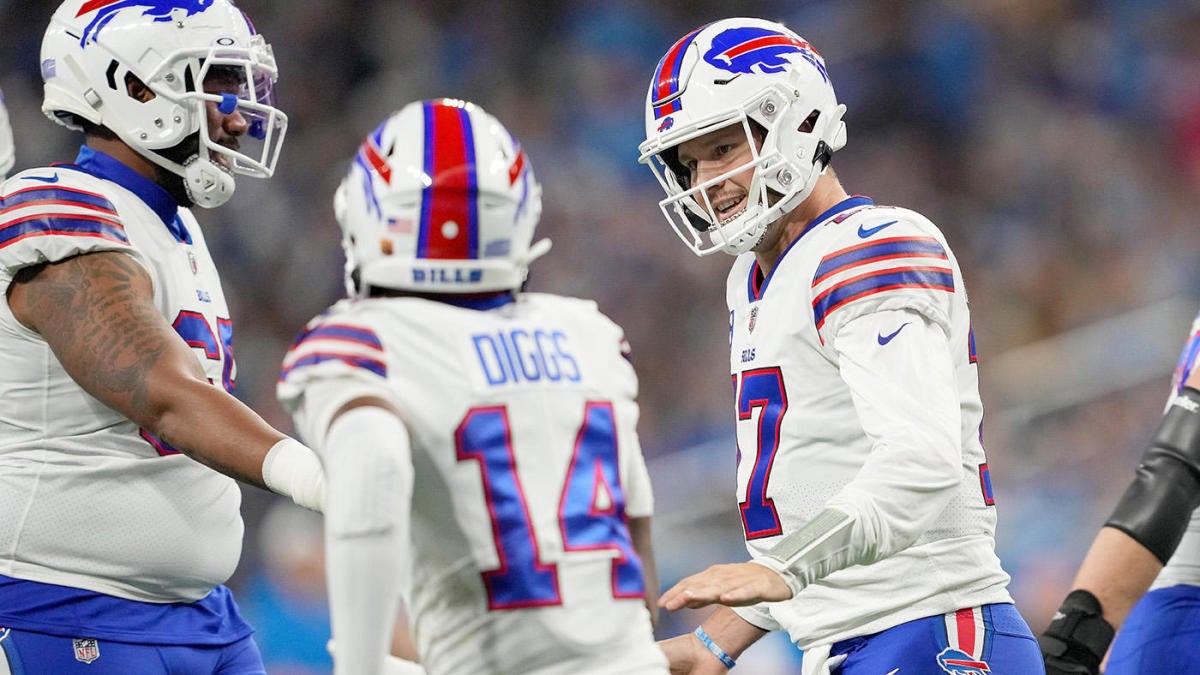 When the Bills needed Josh Allen to make a play, he delivered. Allen's 36-yard throw to Stefon Diggs with 23 seconds left paved the way for Tyler Bass to hit a game-winning 45-yard field goal in the final seconds as Buffalo escaped from Ford Field with a 28-25 victory over the Detroit Lions in a Thanksgiving game for the ages.

Tied 25-25 with 23 seconds left, Allen made sure the Bills didn't head to overtime with an upset-starving Lions team. The Bills quarterback fired a perfect strike to Diggs to get Buffalo into Bass' range, needing just one play to set them up for the win. Allen then had two runs for a total of 12 yards to get Buffalo to the Detroit 27-yard line -- setting the stage for Bass to hit the 45-yard kick for the win.

The Lions fought hard in this one, making sure the Bills earned every bit of their victory. Detroit tied the game at 25-25 with 28 seconds left as Mike Badgley hit a 51-yard field goal that curved left and went between the uprights. The Lions pinned the Bills at their own 25 before Allen had the throw of the day to Diggs -- and showed the league he's still one of the elite talents in the game.

Allen finished with 253 yards and two touchdowns, while rushing for 78 yards and a score. He struggled throughout the afternoon, but led Buffalo to 10 points in the final 2:40 to pull off the win. Allen threw a 5-yard touchdown pass to Diggs with 2:40 left to put the Bills up 25-22, capping a 14-play drive in which Diggs had four catches (was held to three on the game prior to that drive).

The Lions followed with a 10-play, 42-yard drive that took 2:17 off the clock, converting a fourth-down run by Amon-Ra St. Brown with 45 seconds left at the Bills' 49-yard line to keep the game in hand. Detroit didn't move the ball well after that run, setting the stage for Buffalo to avoid the upset and hand the Lions their sixth consecutive Thanksgiving Day loss.

Here are the key takeaways from what turned out to be a thriller on Thanksgiving.

Why the Bills won

Josh Allen didn't have his best game completing the football, but the Bills quarterback (sore elbow and all) delivered the perfect throw when it mattered most. Allen's throw to Diggs made sure this Thanksgiving game for the ages didn't go to overtime. Allen threw the strike to Diggs where only Diggs could corral the pass, as Diggs outstretched his arms and got to the ball before Lions safety Kirby Joseph did.

Of all the throws Allen has made, that was one of the best of his career. He finished 10 of 14 for 90 yards and a touchdown in the fourth quarter (112.2 rating) along with five carries for 37 yards. When the Bills needed Allen, he stepped up when it mattered.

Why the Lions lost

Time management has been the one weakness of Dan Campbell's coaching career thus far, and his handling of the clock in the final minute cost the Lions the potential go-ahead touchdown -- and the win. Campbell didn't take a timeout right away on a 15-yard pass to Amon-Ra St. Brown with 37 seconds left in a 25-25 game -- letting the clock run 10 seconds before a review was made by the officials to determine if the Lions got a first down.

Detroit didn't get a first down on the play, as Lions quarterback Jared Goff then decided to throw a deep pass to D.J. Chark on third-and-1 from the Bills' 33-yard line with 32 seconds left. The Lions could have ran a play, got the first down, called a timeout, and had another set of downs for a closer field goal situation -- or go for the winning touchdown -- and eliminate time off the clock.

Basically, Campbell could have called a run play on third-and-1 or have Goff go underneath and get the first down (the Lions still had two timeouts left). There was no need for Goff to go deep on third-and-1, even if Chark appeared to be open on the route.

Late-game situations have been bad for Detroit in the Campbell era, especially this season.

Campbell's third-and-1 play call with 32 seconds left in a 25-25 game gave the Bills an opportunity to get the ball back. Goff threw the ball deep to Chark instead of going underneath and extending the possession. Campbell could have called a run play, similar to what he accomplished on fourth down and on a two-point conversion earlier in the game.

Also, look where Amon-Ra St. Brown is in this standstill shot. Goff could have went to the best receiver and extended the play.

Allen's heroics don't come without the Lions giving him the chance to win the game in the final 30 seconds. This is on Campbell and Goff for the poor execution of this play -- Campbell on the play call and Goff on the decision.

Play of the game

Here's another angle of the throw, showing how far Allen had to unleash this ball. Not bad for a quarterback who's battling an elbow injury.

"Throw it to 1-4. Trust what I was seeing. Just trying to win a football game." -- Josh Allen explaining his mindset on that last drive to CBS Sports' Tracy Wolfson.

Diggs had five catches for 65 yards and a touchdown in the fourth quarter. The 36-yard catch arguably was his biggest in a Bills uniform.

Buffalo Bills vs Detroit Lions Inactive and Injury Reports for

In the Buffalo Bills vs Detroit Lions inactive and injury reports, Bills QB Josh Allen (right elbow) is listed as questionable but will be

What channel is Buffalo Bills game today vs. Lions on Thanksgiving

Bills vs. Lions Score, Results, Highlights: Buffalo comes back to