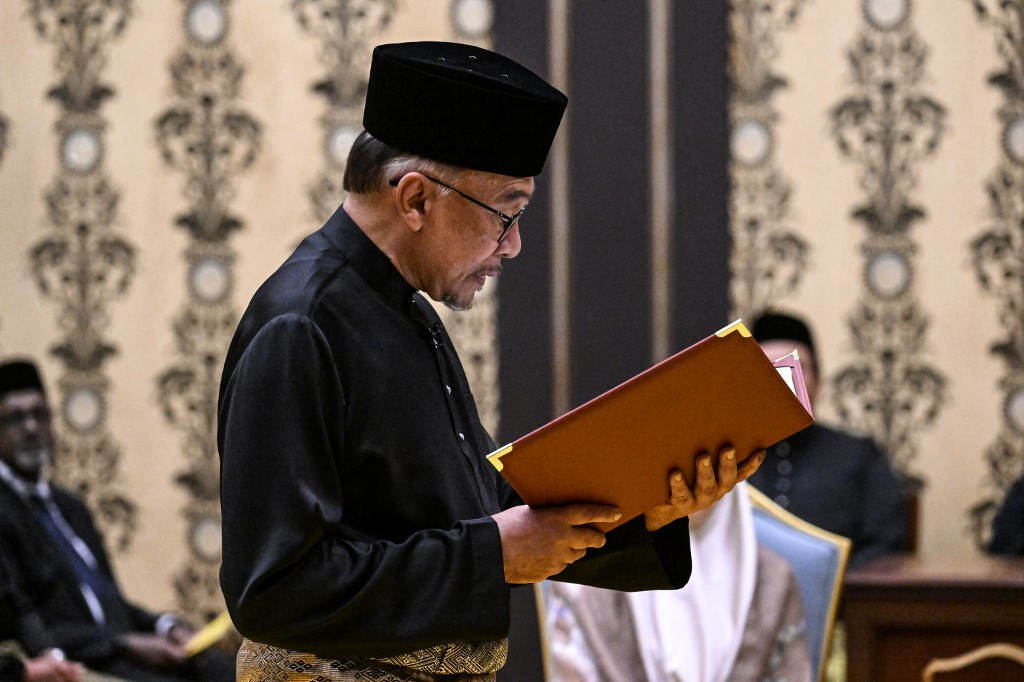 The ceremony at the palace closes the chapter on one of the most dramatic elections in Malaysia's history, after no party managed to secure a majority to form a parliament for the first time since independence in 1957.

Anwar's ascension to the premiership caps a turbulent political life, which has not only propelled him into the corridors of power but also landed him inside a jail cell.

"I, Anwar Ibrahim, after being appointed to hold the position of prime minister, solemnly swear that I will honestly fulfil that duty with all my efforts and that I will devote my true loyalty to Malaysia," the 75-year-old said while dressed in traditional Malaysian clothing.

In the capital Kuala Lumpur, Anwar's supporters were in a celebratory mood.

"I got goosebumps, seriously," said 36-year-old Norhafitzah Ashruff Hassan. "He fought hard to be given the chance to be PM. I hope he performs well and proves his worth."

Muhammad Taufiq Zamri, a 37-year-old product manager said: "I cannot express in words the ecstatic feeling I have."

Campaigning on an anti-graft message, Anwar's multi-ethnic Pakatan Harapan coalition won the most seats in the weekend's election with 82.

But it still fell short of the 112 required for a majority.

In an attempt to break the deadlock, the king had summoned Anwar and former prime minister Muhyiddin Yassin, whose Perikatan Nasional bloc came in second place with 73 seats. But no deal could be struck.

The king held a special meeting with other royals earlier Thursday before the palace announced Anwar as the new premier.

For Anwar, the premiership is the culmination of a 25-year rollercoaster.

The firebrand former student activist was first poised to take the reins in the late 1990s, after serving as finance chief and deputy prime minister under Malaysia's political patriarch Mahathir Mohamad.

But the two had a bitter falling-out over how to handle the 1997-98 Asian financial crisis.

Mahathir sacked his former protege, who was also expelled from their then-party the United Malays National Organisation (UMNO), and charged with corruption and sodomy -- charges Anwar said were politically motivated.

Anwar was sentenced to six years in jail for corruption in 1999, and given an additional nine on a sodomy charge the following year.

Street protests erupted and evolved into a movement for democratic reforms, with Anwar stringing together an opposition coalition from behind bars.

The Mahathir-Anwar tussle has dominated and shaped Malaysian politics over the past four decades, "alternately bringing despair and hope, progress and regress to the country's polity", according to Oh Ei Sun of the Pacific Research Center of Malaysia.

The Malaysian Supreme Court overturned Anwar's sodomy conviction in 2004 and ordered him freed.

Anwar re-aligned with Mahathir during the 2018 elections, when his erstwhile foe came out of retirement to challenge incumbent Najib Razak, who was mired in the billion-dollar 1MDB financial scandal.

Their detente scored a historic victory against UMNO and Najib, who is now serving a 12-year jail term for corruption.

Mahathir became prime minister for the second time, with an agreement to eventually hand the premiership to Anwar.

He never fulfilled that pact, and their alliance collapsed after 22 months.

In his most recent bid to lead Southeast Asia's third-largest economy, Anwar once again pledged to end corruption and cultivate multi-ethnic harmony.

"One of his agendas is to ensure he is able to fulfil his reform agenda as he looks to stabilise a loosely cobbled federal coalition."

James Chin, a professor of Asian studies at the University of Tasmania, told AFP the announcement "will be welcomed internationally since Anwar is known as a Muslim democrat worldwide".

"His biggest challenge will be to lead Malaysia out of the economic malaise following the pandemic."

10m ago 16.22 GMT 64 min: Juranovic has been the boss of Vinicius Junior down the Brazil left. 13m ago 16.19 GMT 61 min: Croatia have slowed the game down and it’s causing Brazil and their supporters palpable frustration. 1h ago 15.17 GMT 17 min: Brazil pass it around the back, though they’re getting severely hassled by the Croatian press. 2h ago 15.02 GMT 2 min: Brazil have lost five successive knockout matches at the World Cup against European opposition. Photograph: Denis Lovrović/AFP/Getty ImagesUpdated at 14.25 GMT3h ago 14.02 GMT Croatia make two changes to the starting XI named for the win over Japan.

30 minutes ago The Guardian

The Qatar 2022 World Cup: Knockout football fever brought to you by MSPORT – The Sun Nigeria

34 minutes ago The Sun Nigeria

BRS will debut in Karnataka polls

Bharat Rashtra Samithi (BRS), the new avatar of TRS, will debut in Karnataka Assembly polls, said BRS chief K Chandrasekhar Rao on Friday, who also unveiled his new party’s slogan – ‘Abki Baar Kisan Sarkar’ (This time a farmer’s government). “We are all going to share the task of fighting Karnataka elections,” said Rao, adding that they want Kumaraswamy as the future Chief Minister of Karnataka. The BRS will provide the much needed boost to JDS in border areas of North Karnataka, which boasts of substantial Telugu population since it was part of the erstwhile State of Hyderabad in British India. On December 14, the BRS will unveil its office in a rented accommodation on Sardar Patel Marg in New Delhi. Arriving at the party headquarters Rao first garlanded the statue of Telangana Thalli (Mother) and then performed a special puja.

1 hour ago The Statesman

World Cup trophy explained: Do the winners keep it and what is it made of?

1 hour ago The Athletic

The period highlighted Trump’s vulnerabilities and provided considerable ammunition for rival Republicans, who argue that the former president must be turned. Trump’s emergence mirrored — and accelerated — the rise of the right-wing Republican Party. But instead, the Republican Party won back the House by a narrow margin and failed to gain control of the Senate. “There is a large portion of the Republican Party ready to move forward,” she said. More broadly, Trump’s terrible, horrible, downright bad, bad three weeks have brought up the possibility that his seeming imperviousness to the normal rules of political gravity has finally worn off.

2 hours ago The Goa Spotlight

2022 World Cup, Argentina: Rodrigo de Paul, as annoying as he is essential

An undecided duel therefore, with two formations which have arguments to put forward, both in the offensive and defensive sectors. But if there's one player La Pulga and the rest of their partners are counting on, it's Rodrigo de Paul. However, the Atlético midfielder does not necessarily achieve a fantastic World Cup. And we see it when Messi suffers a fault: it is always Rodrigo de Paul who comes back to vilify the rival player or put pressure on the referee. But to overcome Louis van Gaal's stable, Rodrigo de Paul will have to show his best level and not just be content to be the guard closer to Lionel Messi.

3 hours ago The Times Hub

2022 World Cup: An uncanny trend in the knock-out stages everyone must know -

The stars above us, govern our conditions.” – William ShakespeareEver since the knock-out stages began with the Round of 16 in the ongoing 2022 World, an uncanny trend has been going with each match that has been played. At least, the game of football and a fortiori, the World Cup is about entertainment and fun. Yes, I have been having fun, no doubt, like many, what with the rude shocks, pleasant surprises and disrespectful upsets that have defined this World Cup. Now that I have whet your appetite with this preamble, let me unveil the uncanny trend. For instance, in the first knock-out match that was played between Netherlands and the United States, Netherlands, whose first letter N precedes U, the first letter of the United States won it 3-1.

3 hours ago The News Nigeria

Mayfield connected with Van Jefferson for the game winner with 10 seconds left to give L.A. a shocking 17-16 win. Las Vegas defenders committed two flabbergasting penalties on that drive to keep the door open for tragedy (or comedy?). World CupdateWelcome to the Elite EightAfter two days off, we’ve reached the World Cup quarterfinals, which start later this morning. Ridder, who led Cincinnati to the College Football Playoff last season, essentially gets a four-game audition. The greatest soccer prodigy you’ve never heard ofYann Gueho was a Chelsea and France prospect rated better than Kylian Mbappé.

3 hours ago The Athletic

Malaysian opposition leader Anwar Ibrahim was appointed prime minister on Thursday, the sultan's palace said, and will be sworn in at 0900

Malaysia's has king appointed long-time opposition leader Anwar Ibrahim as prime minister. He will be sworn in at 5 p.m. (0900 GMT) on

Opposition leader Anwar Ibrahim has been appointed as Malaysia's 10th prime minister, ending days of political impasse in the Southeast