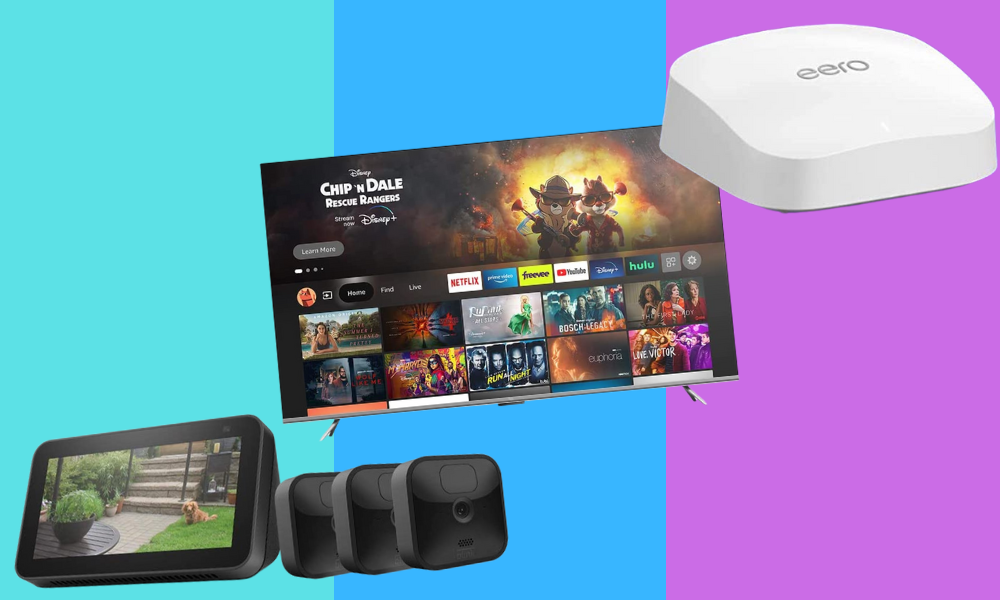 So many devices, so little time.... (Photo: Amazon)

Psst: Did you know Amazon has a hidden section devoted to secret sales on its own devices? It's true! On any given day, the retail giant adds and removes deals from this secret hub on a handful of Echo smart devices, Fire TV video streamers and Kindle e-readers — and the savings are great. If you’re looking to build out a smart home or just want to read mountains of books on one goes-anywhere screen, you need to know about this page. Here are our current fave finds.

The Eero Pro 6E supports network speeds up to 2.3 Gbps, allowing you to blaze through the internet at a speed that feels right for you. The system — which supports up to 100 devices at once — reduces the risk of drop-offs and dead spots, and can be set up in minutes.

"This is the best system I've ever used," said a happy customer. "The speeds are incredible... . I do not ever see dropouts or dead spaces."

Get rid of cable with this handy device. It gives you access to a huge array of streaming services so you can enjoy all your favorite shows and movies. Simply plug the Fire TV Stick 4K into one of your 4K TV’s HDMI ports, and the streaming device will immediately search for your home’s Wi-Fi network and wait for you to log in. You’ll find fun interactive settings like pop-up results for actor and director names via IMDb. There's even Alexa voice assistant.

The Insignia is a Fire TV, allowing you to stream 4K movies and TV shows from Netflix, Hulu, HBO Max, YouTube, Disney+, Prime Video, Sling TV, Paramount+, Peacock and more. Alexa is built into the remote, so you can simply find your favorite show by using your voice.

"What an amazing TV," said five-star reviewer. "I absolutely love it... I got rid of the cable FOREVER. I am a total streamer now."

The Blink Outdoor 3 Cam Kit features three outdoor cameras and an Echo Show 5 to help you secure your home. With this security set, you can see, hear and speak to people in and outside your home through your security system on your phone or Echo Show — and see what's happening thanks to an HD live view.

"If you're looking for easy and inexpensive, as I was, Blink is the way to go," said a five-star fan. "Adding a camera to the system is as easy as scanning a QR code. The video quality for the price is exceptional, even at night. I like the way you can schedule the system to arm and disarm automatically at night in a very granular way on a seven-day plan."

Want to catch up on your reading the modern way? The Kindle Paperwhite Signature Edition Bundle holds all your books but weighs just six ounces. It also grants you access to Amazon’s ginormous Kindle library — get thousands of titles delivered straight to your e-reader. Read for up to 10 weeks without needing a recharge (not a typo). The Paperwhite has a screen that looks like, well, actual paper, so you can get more of that real-book feel. This set comes with its own case and stand.

"When I read about the new Kindle Paperwhite I really couldn’t believe I needed another device, but I am an avid reader, and it just sounded great," said a satisfied shopper. "I ordered it. I love it. It reads so much like a book, has more memory and holds a charge for longer. It was a great buy."

Autumn is the yearly sweet spot for the best movies and TV series, not to mention the NFL, NBA and NHL. Time to watch in style with this 65" Omni Series TV. It features a stellar screen, of course, but also our favorite integrated voice assistant. So, you can say, "Alexa, turn on the TV," without having to lift your tired limbs off the couch. And, at $110 off, this is a total steal.

"This TV is amazing!" said a happy customer. "I'm blown away by this TV's picture. The setup was easy."

The Echo Show 8 has a compact 8-inch display, making it perfect to perch just about anywhere. It also acts as a mini entertainment hub, giving you access to videos, TV shows, movies or the news with Prime Video, Hulu, NBC and more. You can even make video calls and shop online!

“Every day I learn something new that Echo can do," said a five-star reviewer. "The screen quality is good...So far have used it to check on the weather each day, play a couple of short games. Listen to national news from CBS....”

If you have Amazon Prime, you’ll get free shipping, of course. Not yet a member? No problem. You can sign up for your free 30-day trial here. (And by the way, those without Prime still get free shipping on orders of $25 or more.)

The reviews quoted above reflect the most recent versions at the time of publication.

Looking for more great Amazon tech deals? Check these out:

If Man United do go against the grain and keep their powder dry in January, much will be expected of Alejandro Garnacho. Real Madrid threat dissipatesHowever, Marca recently reported Real do not intent to make any additions in January. Garnacho talks open amid huge Man Utd beliefNow, Football Insider report talks with Garnacho have been opened, with United fully convinced they’ve got a budding superstar on their hands. Simply put, Garnacho is not a player Man Utd should or can afford to lose any time soon. READ MORE: Man Utd backed to axe four players in one position, with a fifth who ‘ghosts through games’ on borrowed timeThe article Man Utd convinced they’ve snared ‘£50m-plus star of the future’ Ten Hag has big plans for appeared first on Teamtalk.com.

World Cup 2022 diary: A Messi-Modric fanboy, a reflective Pele, and why it's not called 'Dogar'

Oh, and we shouldn't forget more diary focus on the cats of Qatar, as one reporter contemplated the reason behind the country's name...Messi. Though of course he might also be in for a nightmare...A country of cats and no dogsQatar is full of cats. Before the World Cup there were more dogs on the streets of Doha, but the government launched a campaign to sterilise and control the dog population, which reduced it considerably. Expecting the usual fluff questions about potential World Cup winners, the semi-final line-up, the clash between Virgil van Dijk and Lionel Messi, he agreed. Complete with a replica World Cup trophy made out of the same mirror-like material, they would have been hard to miss!

There was no award for the longest speech (pic: The Game Awards)The front runners for the Game of the Year trophy were always obvious but who else won at The Game Awards and who went home empty handed? Even though the promise of it being shorter than usual wasn’t really kept (primarily thanks to Christopher Judge’s rambling acceptance speech for God Of War) this year was undoubtedly the best The Game Awards so far. There was a lot less reliance on pre-rendered trailers and more emphasis put on the awards themselves, even if they still don’t quite seem like the main event. There was controversy too, with the Game of the Year acceptance speech ending with a bizarre stage invasion from an unknown fan (of Bill Clinton), who was promptly arrested. Ultimately, there could be only one winner of the Game of the Year award but God Of War Ragnarök walked away with six awards and Elden Ring with four, so everyone had a reason to be happy.

The UK’s papers have joined the calls for the Duke and Duchess of Sussex to give up their royal titles. The Daily Mail goes in hard, describing the series as “little more than a hatchet job from start to finish”. The paper’s editorial states: “What is so infuriating is that the Sussexes continue to make millions out of their royal connections while trashing the institution that sustains them. Story continues“It is sad that the Sussexes found this difference of treatment upsetting, but it should not have come as a surprise. The paper adds: “It is understood there is deep sadness in the royal family that it ‘has come to this’.

Elden Ring wins Game of the Year at Game Awards plus… Bill Clinton?!

That guy did not help to make Elden Ring (pic: The Game Awards)From Software has ‘several more things’ it wants to do with Elden Ring, as it announces its next game will be mech sim Armored Core 6. There’s little similarity between Armored Core and the Soulsborne games, although if anything Armored Core is even more grim and gritty – and usually very difficult. As welcome as the announcement was, what everyone was really hoping for was news of Elden Ring story DLC, which there’s been no official hint of up till now. However, when taking the stage to accept the award for Game of the Year, Miyazaki stated that he had ‘Several more things we want to do’ with Elden Ring. God Of War won six awards overall, including Best Narrative and Best Action Adventure, but Elden Ring also picked up Best Game Direction, Best Art Direction, and Best Role-Playing Game.

Amazon has a hidden deals page: Here's how to find secret discounts

Amazon has a secret deals page called Amazon Outlet that is dedicated to “overstock items at budget-prices.” (Photo courtesy of Shutterstock).

What Is Amazon Fire TV? a Guide to the Streaming Device

Shop Fire Stick TV Deals for Amazon Prime Day October 2022 ahead of Black Friday · Get Fire Stick and Fire TV deals for up to 50% off. · Upgrade