11 Restaurant Chains Open on Thanksgiving Day — Eat This Not That

2 months ago Eat This, Not That

First off, Happy Thanksgiving! But if you're reading these words on Thursday, November 24th, 2022, you're probably more concerned with food than well wishes. While it's possible to find holiday cheer with ease for some, finding a restaurant that's open on Thanksgiving can be a bit more of a challenge

But don't worry, because plenty of your favorite spots are open as more and more people dine out or grab a snack on the big day.

Whether it's for a breakfast that holds you over until the big feast or for a meal you can actually enjoy after you faked it with your mom's dried-out turkey, here are 11 popular chain restaurants open on Thanksgiving Day 2022.

(Just note that hours and openings do vary sometimes based on location, so maybe call ahead before you jump in the car!)

RELATED: 5 Thanksgiving Restaurant Deals That Could Be Cheaper Than Cooking at Home 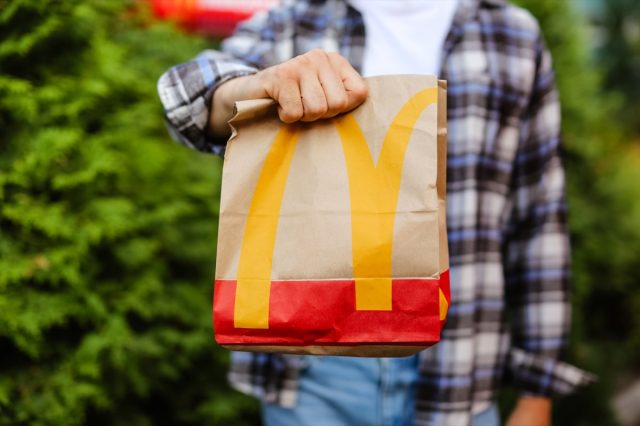 What could be more American than celebrating America's Thanksgiving holiday by going to McDonald's? Not much, really. Fortunately, per Country Living, most McDonald's locations are open on Thanksgiving, so whether it's for a cup of coffee as you drive to your in-law's house or for a Big Mac late-night, the Golden Arches beckon. 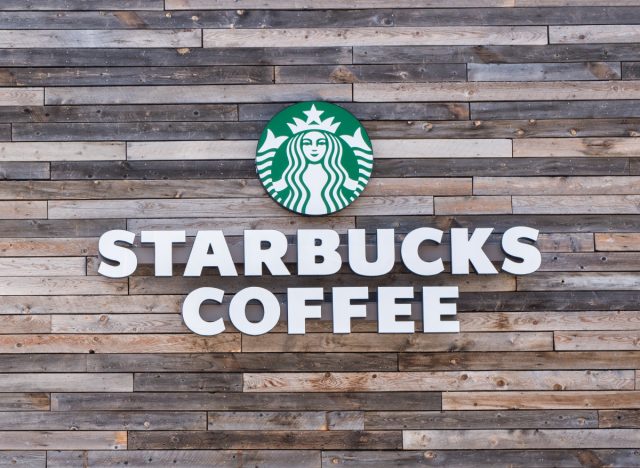 Yes, many Starbucks locations are open on Thanksgiving, though the hours may vary so check with your local store. Did you really think this coffee and pastry chain would let you down?6254a4d1642c605c54bf1cab17d50f1e 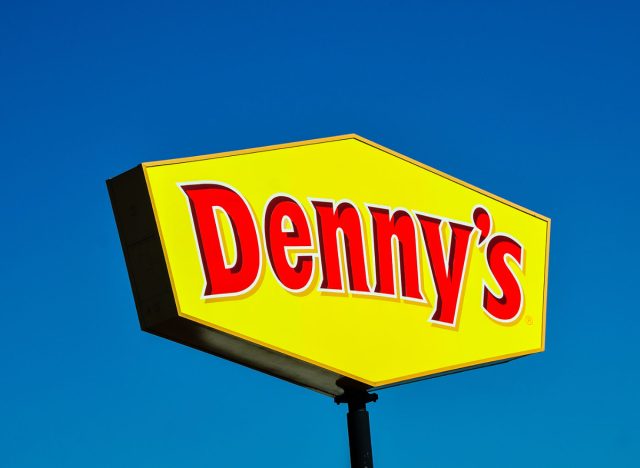 Known for being open 24/7—although most aren't anymore—good ol' Denny's is open for business on Thanksgiving Day. At least, almost all locations are—call ahead to double-check. Several Denny's locations with which we checked in researching today's story, you'll be welcomed in on this fine Thursday. (Some Denny's will close that afternoon, though, FYI.)

RELATED: 6 of the Strangest Things That Have Happened at a Denny's 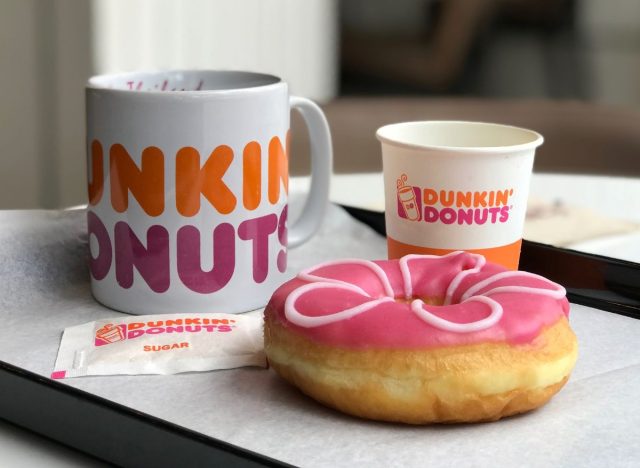 Yes, America can still "run on Dunkin'" on Thanksgiving day! Almost every Dunkin' location is open for business on Thanksgiving, so go on in and grab a coffee and donut or try a new Wake-Up Wrap (that's a pancake wrapped around an egg and bacon). Or hey, there's a sandwich with turkey sausage, so that's Thanksgiving-appropriate, right? 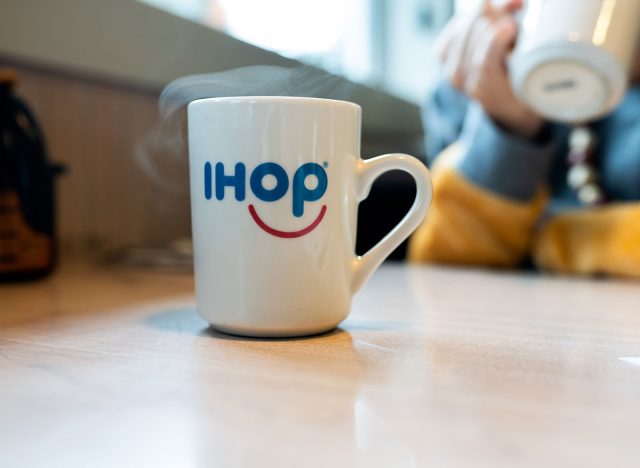 The International House of Pancakes is open for business on America's day of Thanksgiving, so head on in for a stack of pancakes and some coffee. It's a pretty robust menu, so lunch and dinner work too. 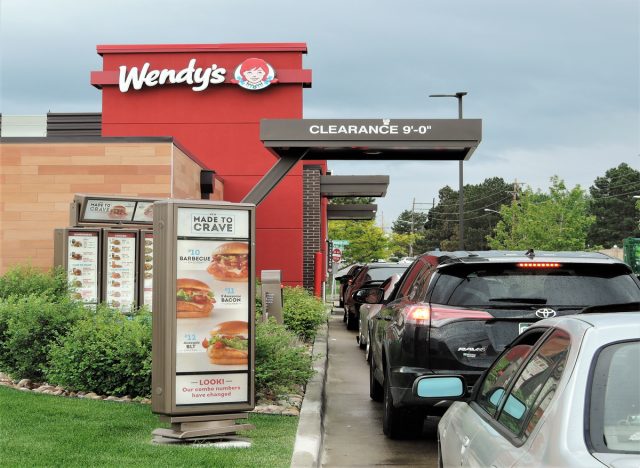 Frosty lovers, you're in luck! As are Spicy Chicken Sandwich and chili and baked potato lovers, because Wendy's is open for business on Thanksgiving Day. In fact, most Wendy's locations are open every day of the year, per the company's blog, even including Christmas and New Year's. Try the new French Toast sticks which are driving the chain's breakfast sales. 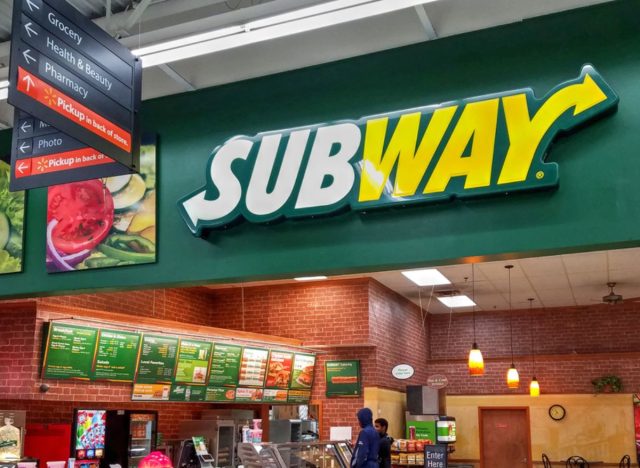 You can get your turkey fix at Subway on Thanksgiving. And your steak, chicken, and Veggie Delight fix too. This world's second-largest fast-food chain is open at most American locations this Thursday, November 24th, 2022. 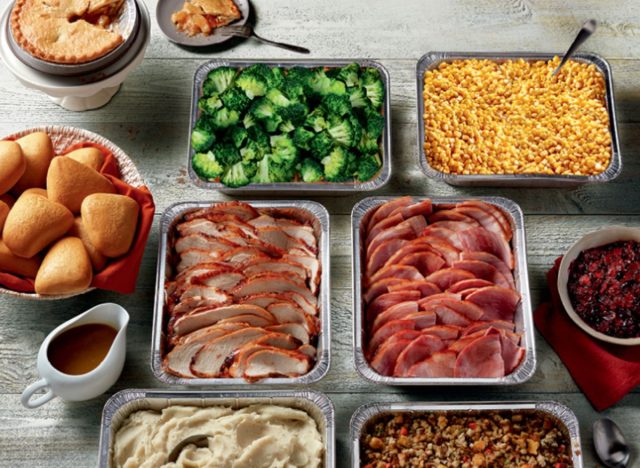 Considering that many people literally cater their Thanksgiving dinners from Boston Market, it's little surprise to find that this comfort-food-centric chain is open on this holiday. So even if you left your dining plan until, well, today, you can still have a classic American Thanksgiving meal when you head here right now. 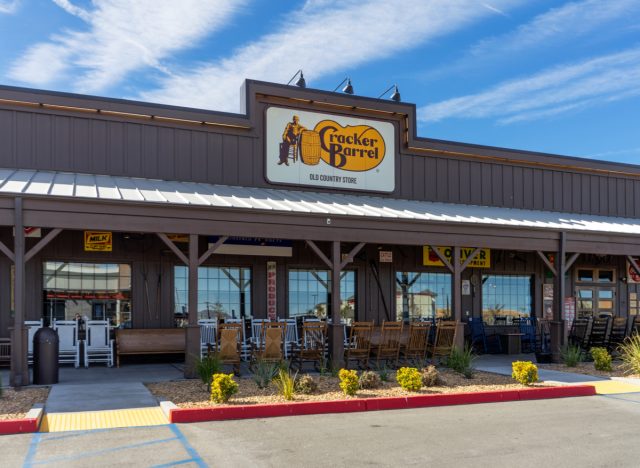 Not only is Cracker Barrel open on Thanksgiving, but there's a good chance the place will be jam-packed, too. In fact, this is the absolute busiest day of the year at Cracker Barrel restaurants, according to a press release the company put out a few years ago. 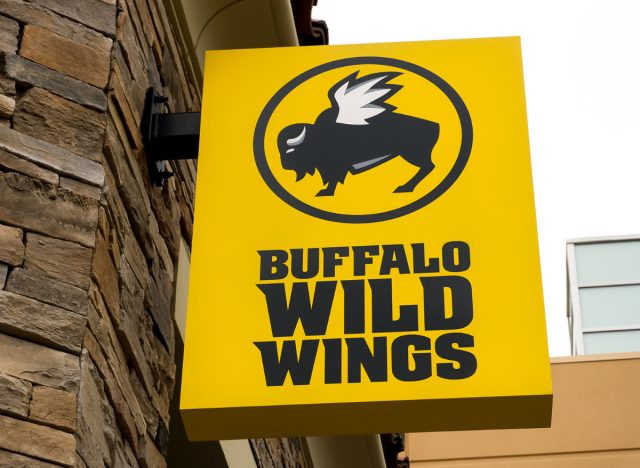 Get your wings, beer, apps, and all the rest of your B-Dubs favorites on Thanksgiving Day, because most Buffalo Wild Wings locations are open for business. And yes, there will be football games showing on the screens. 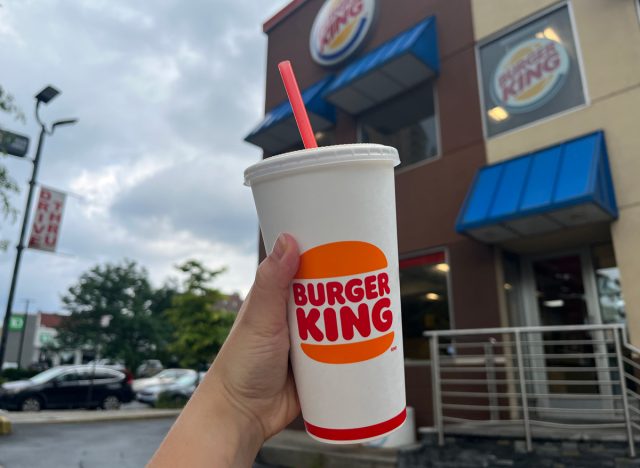 Many BK locations have reduced or altered hours on Thanksgiving Day, but almost all Burger King restaurants are open at some point. Call ahead before going to get your Whopper or your Chicken Fries. 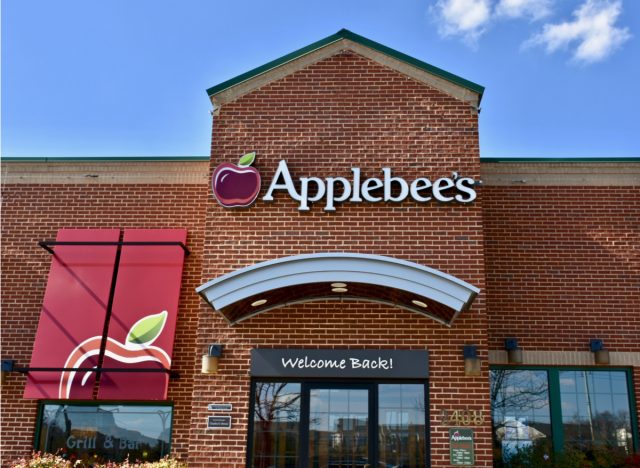 Your friendly neighborhood bar and grill is open for business on Thanksgiving Day, so head right on over to Applebees for apps aplenty, Bourbon Street Chicken and Shrimp, a Crispy Chicken Tender Salad, or a massive Blue Hawaiian Long Island Iced Tea. Just note that some locations may close earlier than usual on Thanksgiving.


Continue reading... Read On "Eat This, Not That"

More News On "Eat This, Not That"

Liverpool put in a horrific 45 minutes, an improved 30 and an irrelevant last 20. The sum total was a 3-0 defeat to Wolves which leaves us winless in four and 10th. Second to deliveries, second to second balls and absolutely nowhere at all if your name is Joel Matip, other than where he shouldn’t have been. Missed opportunitiesIt couldn’t have been much worse, of course, but the second half was a massive improvement on the first and the reaction should be noted. It was all a lot quicker, a lot sharper, a lot more like a team of players actually wanted to win the game.

1 day ago This Is Anfield

How to watch the Batman movies in order

2 days ago We Got This Covered

Tesla Insurance: 17% of Eligible Customers Use It; 20% Growth

Tesla Insurance: 17% of Eligible Customers Use It; 20% Growth Tesla is shaking up the traditional insurance industry with its innovative approach to vehicle insurance while forcing the industry to provide better rates for Teslas. Tesla Insurance reported an annual premium run rate of $300 million as of the end of last year and growth of 20 percent a quarter. Tesla Insurance is now available in 12 states, with an average of 17% of customers using a Tesla Insurance product, which continues to rise. How Tesla Insurance is Different As a refresher, Tesla insurance uses the driver's safety score to provide the premium. The motivation behind starting the Tesla Insurance business was to reduce the total cost of ownership for Tesla vehicles, which saw high premiums from third-party insurance companies.

3 days ago Not a Tesla App

What is TikTok’s ‘proof not everything can be an album cover’ trend?

The “proof that not everything can be an album cover” trend – also simply known as the “Album Cover” trend – is an oxymoron whose name contradicts its outcomes – but of course, that’s part of the fun. What is the “Album Cover” trend, and how do you participate? @benjikrol i’m gonna be the next tiktoker to release music 🤩👍 ♬ Album cover – LillyspoonerAs the name implies, this trend turns your photos into album covers. You can find the audio in the caption section of the video above, or you can search “Album cover audio” in TikTok’s search bar. You can find that filter by typing “Album Cover filter” in TikTok’s search bar.

3 days ago We Got This Covered

Kylie Jenner, pictured above wearing a fake lion’s head at Paris Fashion Week — as one is wont to do — is being accused of insensitivity toward victims of the 2021 Astroworld Festival tragedy after throwing her kids an apparent Astroworld-themed joint birthday party. The bash, celebrating her daughter Stormi’s fifth birthday and son Aire’s first, featured large inflatable heads similar to those featured on the cover of Jenner’s on-again, off-again boyfriend Travis Scott’s 2018 album Astroworld. The couple had previously used the Astroworld theme for Stormi’s first, second, and third birthday parties, but seemingly retired the inflatable heads in 2022 for reasons that seemed obvious at the time. Several people popped off about the party theme in a Reddit thread, calling it “tasteless” and “tone deaf.”“Isn’t this tasteless after the Astroworld tragedy … where children died,” slammed one user. “CHILDREN died at Astroworld — only fitting that they would make it into another birthday party theme,” seethed another.

3 days ago We Got This Covered

5 Major Food Recalls You Need To Know About Right Now

As many new food items hit the supermarket shelves, several are simultaneously being pulled from stores. Over the last week, multiple food companies have issued food recalls for reasons ranging from possible contamination and undeclared allergens to violating federal inspection rules. While none of the recalled products are currently being sold, they were distributed recently, so you're going to want to double-check your kitchen. Here's the lowdown on five new recalls announced by the U.S. Food and Drug Administration (FDA) and the USDA's Food Safety and Inspection Service (FSIS) this week. See here for the full list of recalled products and here for images of the labels.

3 days ago Eat This, Not That

Gautam Adani: ‘It Wouldn’t be Morally Correct to Proceed with FPO’

4 days ago That Trending

Black Panther: Wakanda Forever is now at last available to view at your leisure on Disney Plus, after the single longest gap between an MCU film’s theatrical release and its streaming arrival since the platform began. You’d think this might keep folks happy, but actually you’d be wrong…Black Panther: Wakanda Forever‘s steaming debut leaves MCU fans steamingvia Marvel StudiosYes, Black Panther: Wakanda Forever finally made its Disney Plus debut today, but unfortunately it didn’t go to plan. I mean, we always knew this was one of the darker MCU offerings, but come on, Disney, this is taking it too far. Even haters can’t deny Chris Pratt needs to take on this just-announced superhero role after Guardians of the Galaxy Vol. Unlike Wakanda Forever, the Marvel news machine never goes dark, so don’t go anywhere.

4 days ago We Got This Covered

7 Fast-Food Chains Open on Christmas Day - Eat This, Not That

Like most of the major burger chains that, as you'll see (if you've not already surmised), remain open on Xmas Day, most Wendy's restaurant will

11 Restaurant Chains Open on Thanksgiving — Eat This, Not That

Fortunately, per Country LifeMost McDonald's locations are open on Thanksgiving, so whether you're grabbing a cup of coffee on your way to your

These Popular Restaurant Chains Are Open on Thanksgiving

These Popular Restaurant Chains Are Open on Thanksgiving · If you want the feast without the work, here are some options for restaurants that are

11 Restaurant Chains Open on Thanksgiving Day - Eat This, Not That

Every Chain Restaurant Open on Thanksgiving This Year - Thrillist

Restaurants Open On Thanksgiving Day 2022 Near Me

The restaurant chain is open for breakfast, lunch and dinner on Corral Restaurants will be open on Thanksgiving Day from 11 a.m. until 4

7 Best Chain Restaurants Open on Thanksgiving - Eat This, Not That

If you're craving down-home food for Thanksgiving but don't want to cook, head to your local Cracker Barrel. The chain is open on Thanksgiving

Check out this list of fast food places open on Thanksgiving. Get the holiday hours for restaurant chains like Boston Market, Burger King,